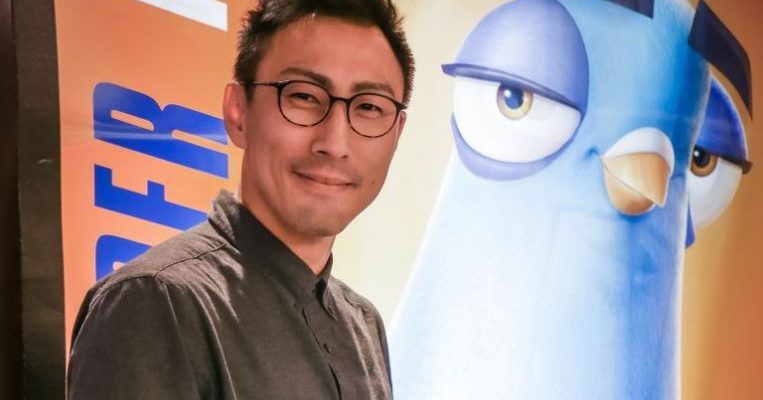 If you watch the trailer of upcoming Hollywood animated film Spies In Disguise, which opens in December, look out for the Japanese characters. They come to life thanks to a team that includes United States-based Singaporean animator Jason Ho.

Animator goes the distance to do what he loves

When Singaporean animator Jason Ho received an offer to work in the film industry in San Francisco in 2010, he did not waste any time saying yes.

This was despite the fact that he had to uproot his family – his wife and two young sons, then aged three and six months old.

“I wanted to broaden my horizons,” says Ho, who has an interactive media design diploma from Temasek Polytechnic and has always been passionate about animation.

“I also wanted my sons to grow up learning that the world was bigger than just Singapore.”

Since he moved to the United States in 2010, he has worked on Hollywood animated blockbusters such as the upcoming Spies In Disguise as well as Rio 2 (2014) and Ice Age: Continental Drift (2012).

The 42-year-old says he got “lucky” as an animator at Lucasfilm Animation’s Singapore arm.

He was working on Star Wars: The Clone Wars television series when he met a visiting animation supervisor from the US who was so impressed by his skills that he offered him a gig at Lucasfilm’s US-based visual effects arm, Industrial Light & Magic.

“To take on the job, the most important thing for me was to justify why I was better than anyone else who was already in the US,” he says, relating how he scrubbed his portfolio and went through an interview to do that.

I was terrible academically until I found my passion. Then I topped my class in polytechnic. It would only make sense for me to continue pursuing that line of work if I’m good at it.

It was a process he was familiar with as he had sent “countless” job applications in the past and spent many hours networking within the animation industry. “I’ve had my fair share of trying and failing and then trying again and again.”

In 2011, he finally landed a job with animation company Blue Sky Studios, a division of The Walt Disney Studios.

“My career advanced as my skills improved artistically. It was rewarded by the company giving me more responsibilities for Spies In Disguise, where I helped develop some of the supporting characters,” says Ho, who has an older brother. His late father owned a plastic-making factory and his mother is a retired teacher.

His current job in the US is not the first overseas foray for the Bedok boy, who grew up watching lots of cartoons and was endlessly fascinated by drawings and computers.

Watching Toy Story (1995), the first entirely computer-animated feature film, was a revelation for him.

“I knew then that that was what I wanted to do.”

After finishing polytechnic here, he spent a year in Canada, graduating with a post-grad certificate in digital character animation from Sheridan College in 2004.

He worked briefly in Japan with technology giant Casio in 2006, but returned to Singapore to be with his late father, who was ill then.

Today, Ho’s wife, who is Japanese, takes care of their boys, now 10 and 12, full time. His mother, who still lives in Bedok, travels often to the US to visit them.

In July, the family of four returned here for a visit, their first since Ho left nine years ago.

He was impressed by how much old neighbourhoods in Singapore have changed for the better, but he has no regrets about moving away.

“In terms of personal growth, I wouldn’t have done as much if I had not left Singapore.”

What Plan B? It’s music or nothing

As a boy, Alex Hooi started out slinging toy guitars on music-based video game Guitar Hero, but now he is shredding on the real thing on stage in Singapore, Britain, Australia and China.

“My dream is to perform in arenas and stadiums,” says the aspiring rock star, who is studying for a diploma in music and audio technology at Singapore Polytechnic.

The 16-year-old performed at The West Australian Guitar Festival earlier this month, together with musician and Timbre Group co-founder Danny Loong.

Their gigs, which saw them perform with acclaimed guitarists such as Grammy-winning Larry Mitchell from the United States and John Butler from Australia, were part of the Singapore-Western Australian Music Exchange initiative, which encourages cultural and artistic exchange between the two countries.

Last year, Hooi travelled to London to compete against other junior guitarists from around the world and ended up as runner-up in the Young Guitarist of the Year 2018 contest.

Earlier this week, he was invited by the Chinese Embassy to perform at an international cultural exchange programme in Hunan, China.

Classically trained on the piano and violin since he was six, he picked up the guitar at 12.

I’ve spoken to enough people to realise that it’s not worth a life of misery thinking, ‘Oh man, I could have been a superstar, but I chose a safer route.’

“The guitar opened me up to music. I could fully express myself and not be restricted to just following sheet music,” says the child of restaurateurs, who lived in Shanghai before returning to Singapore to sit the PSLE and enrol in Bukit Merah Secondary School.

Hooi, who has a younger sister, grew up learning to appreciate a wide variety of music. At home, his parents played The Cranberries and U2, while his grandparents favoured both Chinese and Western opera.

In his teens, he and his friends devoured everything from metal bands such as Behemoth to electronic music artists such as Avicii.

Hooi’s first public performance, set up by his businessman father Chris Hooi, was jamming with a group of buskers at Changi Village in 2016. He played Led Zeppelin’s Rock And Roll to deafening applause.

“I was really shy, I was an introvert and he thought that it would be a good start for me to perform in an open space,” he recalls.

As his performing chops improved, his father got him to jam with the musicians in live music clubs such as Barbershop By Timbre and Crazy Elephant, and at events such as Beerfest.

“Being surrounded by players whose standards are miles ahead of me inspired me to be a better musician.”

He plans to enrol in either Berklee College of Music in Boston or Musicians Institute in Los Angeles in the future.

“I don’t want to be just a guitarist. I could do audio engineering or be a composer of soundtrack for Hollywood films.”

Budding playwright Shayna Toh wrote her first musical at 17 and, to date, it has been staged in Singapore and the United States to acclaim.

Firefly In The Light, about a schoolgirl who leaves her small town to pursue big dreams, was an official Selection at the 2017 New York Musical Festival and was staged at Brown University in March this year. It premiered in Singapore at The Arts House in 2014.

Now 22, Toh is working on her second play, The Olive Trees, while finishing her final year at Brown University in Rhode Island, where she is reading international relations and music.

The former Raffles Institution student started composing her own music at age six and was writing lyrics by the time she was 12. A staging of The Phantom Of The Opera that she saw when she was 10 got her hooked on musicals.

“It was the first time I had seen such a spectacle which was unlike anything that I’d ever seen before,” says the only child.

As she grew older, she realised that the arts have the power to make a big impact.

“Whether we tell stories in a way that investigates the shortcomings of society, or projects a view of society we want to work towards, we are using it as a model and as a goal to alter hearts and minds, seek social change and alter the way we see the world ,” she reflects.

I’ve never been discouraged from pursuing theatre simply because not as many people look to it as a path.

“One thing I’m more aware of after coming to the US is the whole idea of how we can consider and comment on social and racial dynamics through our stories.”

Her first musical, Firefly In The Light, went through several rewrites to reflect those dynamics. The Olive Trees is centred on a young girl living in an authoritarian state.

“I realised that art is really a tool for opening dialogues and to start social change. You also can’t underestimate how emotive art can be.”

She says she is still working out her long-term plans and does not rule out a career in theatre. But being pragmatic, she has also applied to study law after she graduates from Brown.

“But no matter where I end up, I still want to do theatre,” she says.

Disney theme parks are branded “the happiest place on earth” and one Singaporean, Mark Lim, is part of the team that keeps visitors in high spirits.

Lim, 25, is a story artist and concept designer at Walt Disney Imagineering in California.

“We are responsible for the creation, design and construction of the Disney theme parks and attractions worldwide,” he says of his job, which he took on in June.

He helps conceptualise ideas for projects such as animations and roller-coaster rides, a dream come true for the former Singapore American School student, who was weaned on Disneyland and Disney animated films such as Peter Pan.

“I’ve now realised how much thought and how much details go into creating an atmosphere that guests can enjoy themselves in, how to take what’s impossible and make it possible,” he says.

He has been an avid doodler since he was a child.

“During national service, I would draw anything, from my boots to jerrycans, whenever I had free time. Drawing also led me to think about why things are designed a certain way.”

After serving NS, he left Singapore to pursue a degree in computer animation at Ringling College of Art and Design in Sarasota, Florida, honing his skills as an animator and storyboard artist.

I see a lot of professionals who do well in life, they have the 5Cs, but I ask myself, ‘Will I be happy when I come home from work?’

MARK LIM, 25, who works for Disney and helps conceptualise ideas for projects such as animations and roller-coaster rides

As an intern, he was attached to Disney Television Animation, where he worked on Disney animated series such as Ducktales and Amphibia.

He assiduously built up his portfolio and contacts, eventually getting a job offer from Walt Disney Imagineering just an hour before he went on stage to receive his degree scroll.

He did consider working in Singapore to be closer to his parents and two younger brothers.

“Ultimately, they encouraged me to do what would be best for my career,” says Lim, who chose to remain in the United States, in the epicentre of the animation and feature film industry.

It is early days yet, but Lim says his time at Disney so far has taught him to always be curious, take risks and to never be afraid to try new things.

“It does not matter if you are the best, it matters if you have a unique artistic voice and are genuinely a good person to work with. Bring something new to the table and make yourself irreplaceable, that has been my focus since,” says the bachelor, who is in a relationship.

“Seeing Disney cartoons on screen and then getting to experience them in real life at the theme parks is an ethereal experience. I am happy to be able to help bring the magic into the physical world.”