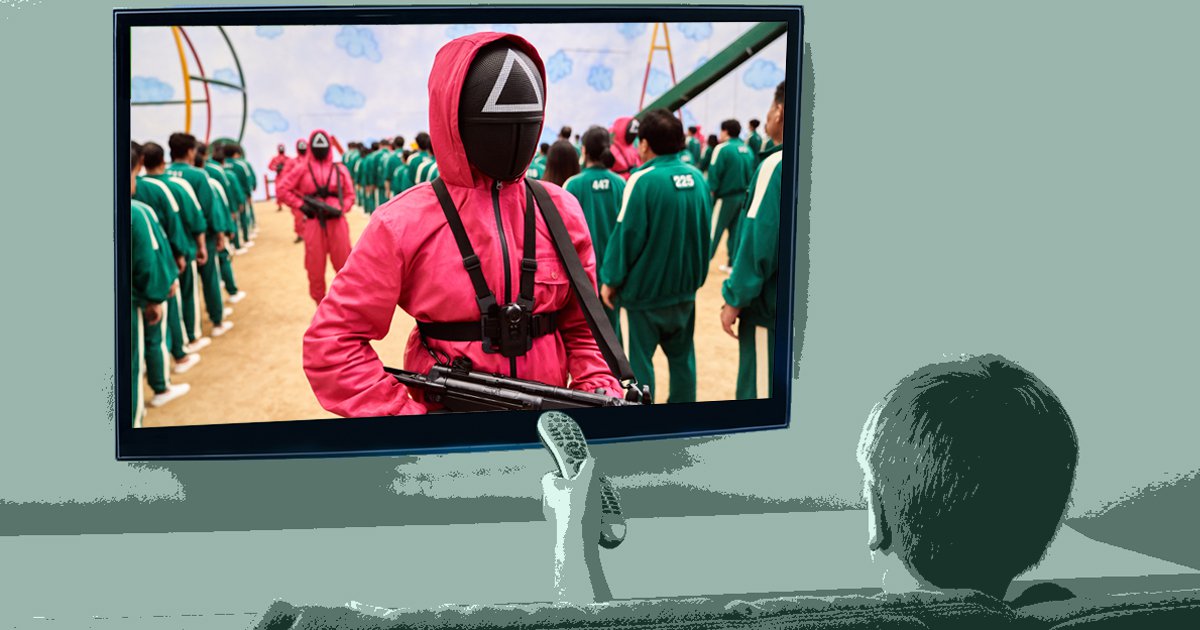 ‘Can I watch Squid Game?’

When you hear your child say those words, it’s easy to say a speedy ‘yes, fine’. After all, it sounds like something for kids, perhaps to do with marine biology.

But there’s one problem: The hit Netflix show that everyone’s talking about – from children in the playground to critics on TikTok – is a 15 rating, covering very grown-up topics such as gambling, sex, violence, murder, and drug use.

The South Korean series may be based on children’s games, but they’ve been made dark, sinister, and spattered with blood.

Squid Game is the hyped-up show of the moment. Not only is the series trending on Netflix, but, like most modern day phenomena, it’s also plastered over TikTok.

All that means being able to say you’ve seen it is the hottest social currency for tweens – making ‘but all my friends have watched it’ a tricky plea to resist.

No wonder ‘age rating of Squid Game’ is zooming up the Google search rankings, as worried parents try to work out if they should say yes or no.

What age rating is Squid Game?

What age rating is Squid Game?

Squid Game is the new South Korean TV series gripping Netflix viewers across the globe, following the plight of several individuals who are in dire debt and desperate for a way out.

The group are offered the chance to win a huge jackpot of money if they take part in a series of survival challenges based on children’s games.

However, don’t let the mention of children’s games fool you, as this show is anything but targeted at kids.

Squid Game is brutal and violent, with Netflix stating on the UK site that it has a rating of 15.

The BBFC emphasises that this means that this ‘particular form of media is suitable only for persons aged 15 or over’.

As you ponder this decision, it’s worth getting to grips with what Squid Game actually is.

So what’s it all about? Set in South Korea, it focuses on the sinister premise of vulnerable people being given the chance to play children’s games for a great deal of money.

Of course, it’s not as simple as that – when they agree to take the opportunity they are abducted and drugged, and wake to find themselves in a huge warehouse with floor-to-ceiling bunks, in matching numbered jumpsuits. They quickly find out in the first game that losers aren’t just eliminated – they are shot dead. They are playing for their lives.

So far, so not sounding ideal for children.

But whether or not you should allow your kids to watch Squid Game depends on more factors than just its age rating.

I was one of the parents being pestered about the show, and I took the controversial decision to say yes.

My daughter is 12 this month and has watched a few 15s. She did a great job on me, saying that ‘all her friends had watched it’, but I would much rather she watched it with me, rather than furtively in her bedroom on her own.

Here’s what I did to make sure what she was ok:

I involved her in the decision

I only said yes to watching episode one and I made it clear to her that I hadn’t seen it, but that the themes it covered sounded very grown up.

I framed it as something we could watch together, and decide together if we thought it was appropriate for her.

Giving my daughter some input into a decision like this seems to help her feel more involved and listened to, and more able to accept it even if the decision doesn’t ultimately go her way.

The completely out of sync lips make the action seem far less real and, frankly, a bit silly.

I asked her what she had seen online

While we were watching Squid Game, I asked my daughter to tell me about the videos she’s seen on TikTok about it.

It’s always good to take an opportunity to show an interest in what your child is looking at online and to talk about how they might know when something is inappropriate for them, or if they need to talk to an adult about it.

We talked about peer pressure

This is a good learning opportunity to talk about peer pressure and how they deal with it.

Would her friends really think any less of her if she told them she wasn’t allowed to watch Squid Game? Or is it just a fad that will be over and forgotten in a few days?

While I have agreed to this, there will no doubt be other things that all her friends are doing that I say no to in future. Would she understand that this was because I have her best interests at heart?

We approached the show as critics

While we watched, my daughter and I pretended that we were movie critics. I asked her how she would describe Squid Game and, crucially, what she’d say to her friends about it. ‘Weird, gory, crazy and tense’ were the words she used.

I highlighted that the blood is fake

Yes it was gory, but we made a joke out of covering our eyes and peeking out of our fingers. Given her love of vet and medical shows, I know that my daughter isn’t bothered by blood – especially when it’s fake, which I emphasised.

Would I let my 9 year old son watch it? That’s a hard no.

Will I be letting my daughter watch the second episode? She hasn’t asked yet. The good thing about having let her watch it with me, is that she now has that valuable social cache – she can chat about it confidently with her friends and know she’s not missing out.

Maybe she doesn’t need to watch any more because she’s also realised that most things don’t live up to the playground hype.

Tracey Blake is a parenting blogger and author and founder of affordable tutoring platform Swotties.