Senior Nationals politicians say ANZ's push for its 100 largest carbon-polluting customers to reduce emissions is virtue signalling, warning the bank it is not society's moral compass.

A new climate policy outlined by ANZ during its results announcement on Thursday said the bank's biggest emitting customers in energy, transport, building, food and agriculture were expected to work with it to develop a plan to "establish or strengthen low carbon transition plans". 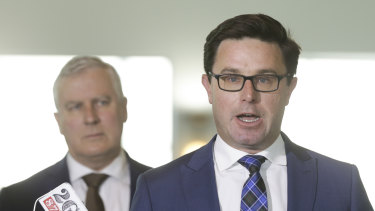 Federal Agriculture Minister David Littleproud, a former executive with Suncorp Bank, said issues of policy and morality should be left to representative government.

"Banks are not, and should not try to become, society's moral compass and arbiter – the Australian people decide that by who they elect," Mr Littleproud said.

"We can't let unelected, profit-driven financiers from Pitt Street dictate to society how to produce food and fibre or how we run our economy."

"The banking sector's entire focus should be on supporting our agricultural producers, not adding an extra layer of administration," Mr McCormack said. "Transport, fertiliser and fuel companies snared by these new rules could have no choice but to pass on costs along the agricultural supply chain, only to have farmers pick up the bill at the end."

But ANZ chief executive Shayne Elliott said the bank's policy was "progressive and appropriate for the time" and would impact only "the really big companies in Australia".

"I know some farms in Australia are pretty big but I'd be really surprised if the 100 largest emitting customers included mum and dad farms. So no, it's not going to impact them," Mr Elliott said.

"We're working with the really, really big food manufacturing companies, all of whom, in our experience, are fully engaged in that conversation. It's just about us working together around a just transition, and a transition towards that lower carbon future."

Australia's largest farm representative groups have set themselves emissions reduction targets. The National Farmers' Federation has set a target for net-zero emissions by 2050. Industry peak lobby group GrainGrowers has endorsed the NFF's plans and committed to develop a grain-specific target for 2030 within the next 18 months. The red meat sector set a goal in 2017 to reach net zero by 2030.

Multinational food companies are investing millions of dollars in Australia to measure agricultural greenhouse gas emissions, which analysts say is a move to avoid being stung with trade tariffs or charges by countries that have set global warming goals.

Australian Farm Institute managing director Richard Heath said there was "no moralising about it" when agribusiness committed to emissions reduction.

"It's a result of having a cold hard look at the short-term business environment as well as a longer assessment of business sustainability that is driving the change," Mr Heath said.

Mr Littleproud was critical of ANZ, but acknowledged its policy was limited to large agribusiness.

"While ANZ has confirmed with me this morning that this will not impact family farms, this policy is disgraceful," he said.

ANZ also announced it would exit thermal coal by 2030 and immediately stop funding for new coal mines and power stations.

Labor agriculture and resources spokesman Joel Fitzgibbon said he'd spoken to ANZ and had been "assured the bank's policy will do no harm to our farmers".

"Banks make money by lending money and I'm sure if they don't want to lend money to our profitable coal mining sector, the mining companies will find someone else prepared to do so."

The most important news, analysis and insights delivered to your inbox at the start and end of each day. Sign up to The Sydney Morning Herald’s newsletter here and The Age’s newsletter here.