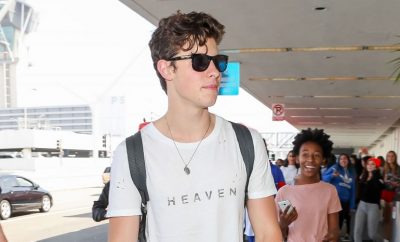 Shawn Mendes has a great relationship with his fans, but a video making the rounds right now is showing how a few people took their enthusiasm over meeting the “In My Blood” crooner a little too far.

As you can see in the video above, the 19-year-old singer was more than happy to take pictures with supporters who waited for him outside an airport…until he became visibly overwhelmed as more and more people demanded his attention, that is.

According to a fan named Nicole who was there for the incident, Shawn hit a breaking point after girls stopped listening to him as he attempted to get to his car. She explained, “For people who weren’t there yesterday and are very confused on what happened…just take a look at Shawn’s facial expressions and his words and overall how stressed and anxious he was getting.”

She then followed up on her tweet by adding, “Hii!! I just wanted to say, this wasn’t what he was like the whole time. At first he seemed happy & maybe a little tired but he was fine with taking pics with ppl but closer to the end (this vid) his driver said they had to go, that’s when a lot of regulars & new fans mobbed him :(”

SM can clearly be heard telling fans, “The car’s gonna leave if I don’t take a photo now.” When he spots a familiar face in the crowd, Shawn explains, “I’m a little stressed,” before declining an offer of help to get through the mob.

This stress can be seen taking a physical toll on him as he was continuously asked for pictures and hugs while attempting to get to his car. Shawn then says, “You guys aren’t listening. I’m not gonna be able to get home…” before the video cuts off.

When the video surfaced, many fans were upset to see the “Lost in Japan” singer so stressed and anxious. A number of them spoke out about how important it is to make sure he has the space he needs, and how his love for his fans shouldn’t be taken advantage of.

Expressing concern for Shawn’s well-being isn’t unwarranted. The musician previously opened up about his anxiety, especially after he released “In My Blood,” which is all about dealing with the condition.

We know the teenager is one of the most famous people on the planet right now, but we have to remember that he’s a person, too, and deserves to have fans respect his space.