During the darkest days of the Second World War, my grandfather volunteered to leave his home in Jamaica to put on a uniform and join the British army and the fight to eradicate Nazism and intolerance from Europe.

Thousands of other boys and young men did the same, journeying from the Caribbean and many other parts of the British empire, answering an emotional summons to defeat the greatest evil of the last century.

Despite the heavy fire his unit took in Italy, granddad mercifully survived the war, and went back home to Jamaica.

He has since died, and in some ways I am glad he did not live to see the weekend’s shameful events in Whitehall and Parliament Square. 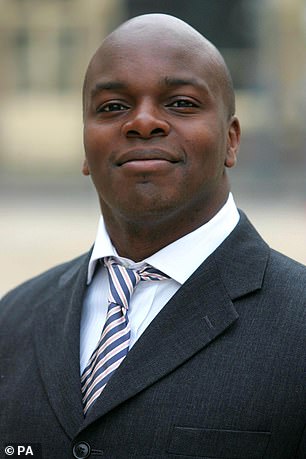 Pictured: Shaun Bailey who is the Conservative Party candidate for the 2021 London mayoral election

Like many Caribbean soldiers, he was proud to have fought under a government led by Winston Churchill, which is why I was so disgusted to see Churchill’s statue defaced, once again, by a historically illiterate mob attaching itself to the Black Lives Matter protest.

I am angered by the mindless vandalism, though of course statues can be repaired and spray paint removed.

Much worse were the violent assaults on police in London, the bottles and stones and bicycles hurled at police horses and officers who had already signalled their willingness for peaceful protest to go ahead.

In later years, my granddad would say he did not fight only to defeat Hitler, but in defence of the British way of life, and one of its central tenets, the right to protest.

But the corollary of that has to be respect for British institutions, including the law and the police.

It is both a tragedy and a disgrace that the Black Lives Matter campaign runs the risk now of having its agenda hijacked by violence.

I cannot absolve black protesters who resorted to violent thuggery, but I would point out that the vast majority of the crowds were entirely peaceful.

A lot of the trouble was coordinated by a rump of anarchist agitators. In fact, to give this mob the historical label of ‘anarchist’ flatters them and is not strictly accurate. 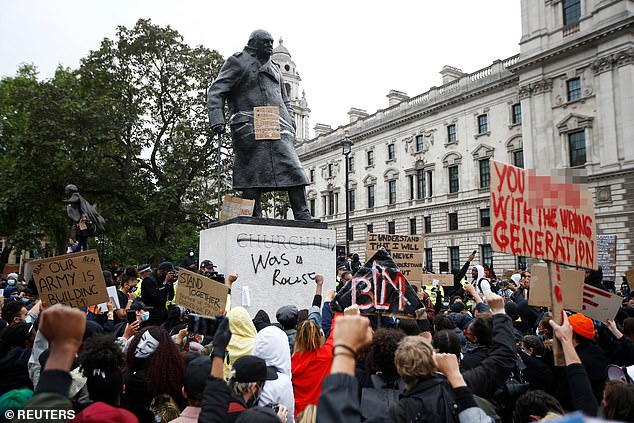 Like many Caribbean soldiers, he was proud to have fought under a government led by Winston Churchill, which is why I was so disgusted to see Churchill’s statue defaced (pictured), once again, by a historically illiterate mob attaching itself to the Black Lives Matter protest

You can see from their lack of imagination in repeating the same acts of vandalism at every opportunity that they are just a bunch of full-time hooligans awaiting the next opportunity to attach themselves, like ideologically crazed leeches, to legitimate protesters.

They are the same mob who infiltrate any protest rally. They were emboldened by Jeremy Corbyn’s election as Labour leader in 2015, and then indulged by the clique around the leadership that owed more loyalty to the far-Left campaign group Momentum than to the Labour Party itself.

The mob have no allegiance to any cause, least of all to that of the black lives they were pretending to speak up for at the weekend.

This presents an immediate challenge to black Britons and the leaders of the Black Lives Matter movement. The agenda has been hijacked, and if they don’t wrest it back from the mob, and restore focus among their supporters, the cause will be fatally undermined. This fight cannot be ducked.

To declare an interest, I spoke out before the weekend supporting the right of protesters to show their disgust at the killing of George Floyd in Minneapolis.

As the Conservative candidate in next year’s delayed London mayoral election, I was criticised by some who questioned how anyone could join a mass march while maintaining strict social distancing.

I thought I should speak out, and I am astonished that my opponent next year, Sadiq Khan, seems to have largely absented himself from these turbulent events in the city of which he is supposed to be mayor.

My view was that with feelings running high, and many young people already suffering the effects of weeks of lockdown, it was better to allow some emotional release while urging everyone to take basic Covid-19 precautions. It was clear from the television footage that many did not do so. But I still believe it was right of the police to take a relatively low-key approach towards the protest. Any attempt at all-out suppression would have triggered much, much worse levels of violence.

Equally, though I know it makes many people uncomfortable, I welcomed some of the officers ‘taking a knee’ before protesters as a nod to the long-standing principle of British policing being based on consent, not coercion. Unfortunately, the violent hardcore seem to have taken this as a sign of weakness and used it to further their own agenda of spreading mayhem and confusion.

These spoilt, entitled would-be crusaders might ponder their fate had they mounted such violent protests in Russia, China or Venezuela.

The tragedy of the weekend violence is that it shows how easily a cause can be subverted. Destroying or defacing statues of dead men does not resolve awkward matters arising from our history, it merely distracts us from discussing them in measured terms. I wish that years ago sensible negotiations could have led to the agreed removal of the statue of the 17th century slave trader Edward Colston from a prominent position in Bristol. But I cannot endorse its violent, uncontrolled destruction in an empty, nihilistic spasm of rage.

For we do not have ‘white’ history or ‘black’ history, but a shared British heritage, with all its wrinkles and imperfections.

I am a proud black man who is equally proud to be British, and there is no need to feel there is any contradiction in this, even if the mob wants me and others like me to believe there should be. We also need to maintain a sense of proportion here. While there have long been ethnic disparities in Britain in deaths in custody and stop and search, these injustices are being addressed.

More crucially, whatever the promoters of violence say, it is simply untrue to suggest that ‘things are just as bad here as in America’. All the data shows that American police forces are much more likely to shoot or discriminate against black people than is the case here.

Before I became involved in politics I was a youth worker in a very disadvantaged and ethnically diverse part of West London. I learned from that experience that it was perfectly possible for a new shared national identity to emerge from racial diversity. 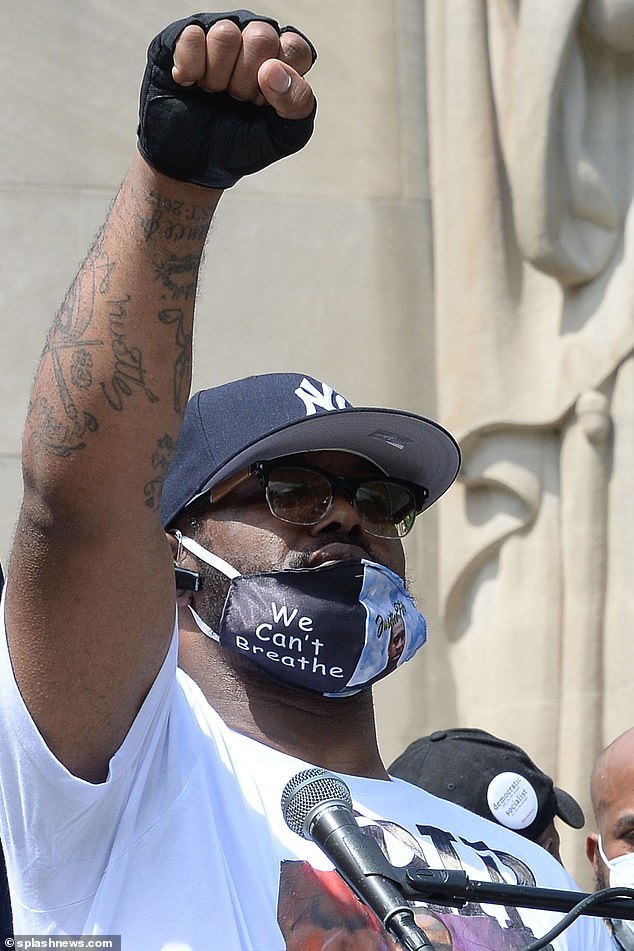 Despite everything, Terrence Floyd (pictured) is prepared to trust in civil institutions and the rule of law over surrendering to the mob. I know my grandfather would have seen it the same way

But this can only work if civil institutions function correctly, and are respected. These institutions – the police, the Army, the law, the civil service – are our guardians and we need the most disadvantaged in our cities to aspire to be part of them.

Those who hijacked the weekend’s protests are acting not out of despair or temporary psychosis. It is worse than that, and more cynical. It is a deliberate attempt to enforce a permanent grievance culture of suspicion and pessimism, and to shut down debate and discussion over the things that divide us and occasionally enrage us.

Contrast that with the spirit of George Floyd’s brother Terrence in America. He has lost his brother in the most traumatic way imaginable. Yet he stood and told the angry protesters: ‘Don’t tear up your town… justice will be served.’

Despite everything, Terrence Floyd is prepared to trust in civil institutions and the rule of law over surrendering to the mob. I know my grandfather would have seen it the same way.