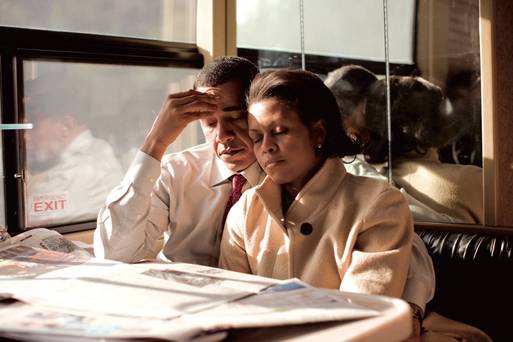 This week, Michelle Obama, visiting the UK to publicise her memoir Becoming, admitted marriage isn’t easy. “There are going to be huge chunks of time where you want to push him out the window,” she said to tremendous applause because, as she well knows, everyone thinks the Obamas have the perfect, most enviable marriage.

They have date nights and look at each other when they dance – not to mention the work-life balancing trick. Now everyone is hoping that the sequel to Becoming will be ‘Everything They Don’t Tell You About Marriage,’ and we’re so ready for it.

We’ve even got a few ideas of our own, for example:

1. Early on (year two) you will come across the list of things they will not discuss with you

…which coincides exactly with the list of things you urgently need to discuss. “Can we talk about this later?” they will ask. But there is no “later” – this is what they don’t tell you. Marriage starts off super chatty and then you have to get them in the car, on a long drive, and hit them with your top line issues.

This is well known. Because they’re flailing around in the night, flinging pillows around, making a sound like an anxious hyena, so we are permanently exhausted and we’re also tired out trying to make them eat better, exercise more, drink less, breathe properly blah blah. They’re always saying: “Why don’t you go to the gym, too?” Shut up, we are TOO TIRED keeping you alive.

3. There is a lot of stuff in a marriage that men do not notice being done

They may notice if we disappear for a week, but then they will be unclear as to why everything has fallen apart, and they’ll think it’s a coincidence. It’s too late to save ourselves but for pity’s sake, if you are raising boys, do not condemn their wives to the world of married-man blinkers.

He will say: “Well I was busy, I didn’t have time”, and you will feel a roar building in your chest and steam accelerating out of your eyeballs… and then you’ll see the neighbours discreetly shutting their windows.

Nobody tells you about a) the frantically picking up of things he has “not had time to do” or b) that you will be capable of throwdowns (for this reason and others) that make Regan in The Exorcist look like a grouchy Labrador puppy.

5. You will need to talk about money

Specifics. You will need to not keep it at all vague, or someone is going to get cheesed off and start withholding.

6. You have an impression of ‘Him’

…and he has an impression of you that is roughly 78pc accurate. At some point, you are both going to see the other 22pc and you might not adore it the way you adore the other 78 (but you’ll get over it).

7. You’re on your own with the menopause

8. You’re in charge of disciplining the kids

9. You will start out finding everything ‘He’ does charming

And you will end up, 10 years down the line, ganging up with the children about his 28-yolk, inedible scrambled egg.

10. He will have a friendship…

…which will make you seriously question his judgement.

11. Other people’s marriages will look like well oiled shiny machines compared to yours

You will notice that he did all the cooking, was charming with the kids and very knowledgeable about the latest Brexit stuff. He will notice that she is super laid back and efficient and she looks great in jeans (or was that you noticing). Anyway, you will get couple envy. But then later, you will discover that he’s gone off with the gardener and she’s ‘become a yoga teacher’ (nervous breakdown) and it will be like an endorsement of your marriage. Because those perfect marriages are the worst of all. That’s another thing they never tell you.