Nothing says spring quite like Shake Shack’s new Cherry Blossom Shake. The frozen treat just so happens to be making its debut right in time for the annual National Cherry Blossom Festival in Washington D.C. this March. Based on what I know, the flavor and color of the newly-released Shake Shack flavor mimic the beloved springtime bloom. And, not only does the new spring milkshake sound totally delicious, but it also happens to be the prettiest shade of pink. I haven’t tried a sip of this one just yet, but you can definitely find me at my local Shake Shack as soon as I’m done writing.

Shake Shack’s new Cherry Blossom Shake was released on March 20, it is made with vanilla frozen custard and cherry blossoms, per an email from Shake Shack. And, no, Shake Shack isn’t using actual cherry blossoms to make this frozen treat. The creamy dessert is flavored with cherries for a tasty sip. Now, like most good shakes, this one is topped with chocolate curls. These aren’t your standard chocolate curls, though. These are pink and totally add to the gorgeous light pink color of the Cherry Blossom Shake.

Now, custard is a bit different than ice cream. If you’ve had it before, you know that it’s richer, thicker, and creamier than plain ol’ ice cream. Shake Shack spins their own custard on a daily basis, per the company. That’s part of what makes Shake Shack’s Shake’s so distinguishable from any other fast food milkshake, IMO. I’ve got nothing against ice cream, but custard is on a completely different level of delicious. 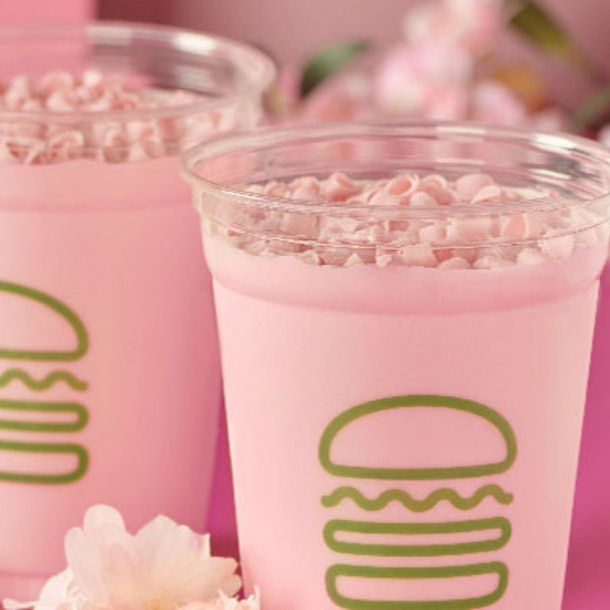 I haven’t tried the Cherry Blossom Shake from Shake Shack — yet. It’s definitely on my must-try list. But, I have tried some of Shake Shack’s other custard flavors like the Shack Attack. It’s made with chocolate custard, fudge sauce, chocolate truffle cookie dough, and Mast Brothers Shake Shack dark chocolate chunks, according to Shake Shack.

So, what’s with all the hype about cherry trees? The D.C. Cherry Trees were a gift from Japan back in 1912, according to the National Park Service. Per the NPS, the blooms represent the "evanescence of human life" and are a nod to Japanese culture. And, the blooms are absolutely stunning to look at. I’ve never checked out the National Cherry Tree Festival myself, but the pictures are exquisite.

The Cherry Blossom Shake will be available for a limited time, according to Shake Shack. To find the pretty pink frozen treat at a Shake Shack near you, check out the restaurant’s store finder feature. All you have to do is plug in your zip code and the page will populate with a list of nearby locations. Soon, you’ll be on your way to sipping on this delightful springtime treat. I’m not far behind you.