After a brief hiatus from the spotlight, a recent paparazzi photo of Selena Gomez indicates that new music may be on the way from the 26-year-old entertainer. On Tuesday, February 26, Gomez was spotted coming out of a music studio in Los Angeles, leading many to believe that she was working on a new project that could potentially be released sometime this year. The photograph, which, according to People, featured Gomez dressed for a comfortable evening as she walked to her car, left no clear indication on why she was at the studio location. However, many are holding out hope that she was there to put the finishing touches on her highly-anticipated third solo album.

Should a project be on the horizon from Gomez, it would come as amazing news for Selenators who have been waiting patiently for new solo music from the "The Heart Wants What It Wants" performer. While the idea of it all is extremely exciting, it really shouldn’t come as a total surprise to followers of the former Disney star. The singer, who has new song coming out on February 28 entitled, "I Can’t Get Enough" with Benny Blanco, Tainy, and J. Balvin, has been hinting at a new project for some time now. And her recent movements make it apparent that she’s starting to ease her way back into the music scene.

While no official announcements have been made, fans who caught a glimpse of the pop star’s most recent photo were completely overjoyed by the mere thought of hearing her new music.

One fan felt completely levitated over the idea of Gomez’s music being right around the corner.

This Twitter follower hopes that the new album is on the horizon, wondering in a tweet: "Is SG2 coming sooner than we think?"

Another social media user want Gomez to get it done.

Someone referred to the photo of Gomez’s studio trek as "great news."

This Selenator shared a simple "Forever" along with a crown to express their feelings about Gomez’s return.

This person offered well-wishes to Gomez on her future.

Meanwhile, this social media user had another important question for Gomez.

And this Twitter user claims to already see the future of Gomez’s next release.

This past January, Gomez blessed fans with a guest appearance on friend and frequent collaborator Julia Michaels’ tune "Anxiety." On the song, which became Gomez’s first new track since last year’s "Taki Taki" by DJ Snake featuring Cardi B and Ozuna, both Gomez and Michaels open up about the struggles of anxiety and how lonely it can feel. Prior to that, ELLE shares that Gomez teased that her next album will be "very honest but playful," during a chat on Instagram Live. While gushing about the album’s details with fans on IG in August 2018, Gomez revealed that her favorite song on the forthcoming project is called "Rare." She also added that "creatively it’s in a really great direction," and revealed that it would feature "tons of collabs."

Although there are no concrete details available about the potential album just yet, there’s absolutely no doubt that the project will be a total crowd pleaser whenever it does get released. People notes that her last album, Revival, which was released in October 2015, debuted at No. 1 on the Billboard 200 and featured many hits including, “Good for You,” “Same Old Love,” and “Hands to Myself.”

Regardless of the timeline for her new music, Gomez’s reemergence into the public eye is certainly a great moment for all. She’s kept somewhat of a low profile after Gomez had reportedly entered into a mental health facility in October 2018. (Bustle reached out to Gomez’s rep for comment at the time, but did not receive an immediate response.)

Though she hasn’t made any public appearances over the past few months, Gomez was more recently spotted at the wedding of her friends Courtney Barry and Sam Lopez in Los Angeles earlier this month. She also celebrated at Barry’s bachelorette party during a girls’ trip to Cabo San Lucas just weeks prior, according to E! News. 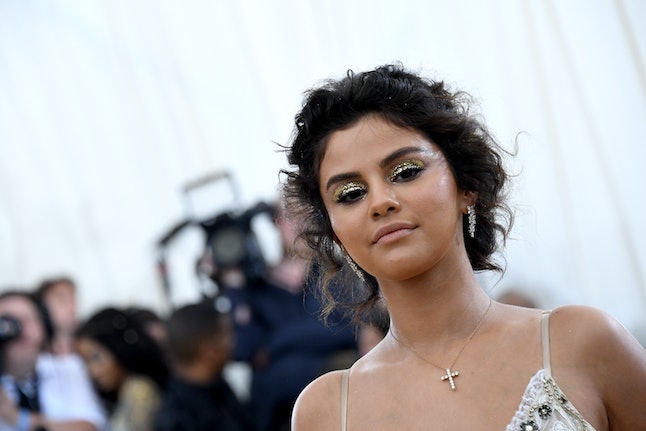 Just judging from the photo, it seems that Gomez is happy, healthy, and ready to rejoin the spotlight — and it’s certainly amazing to see.