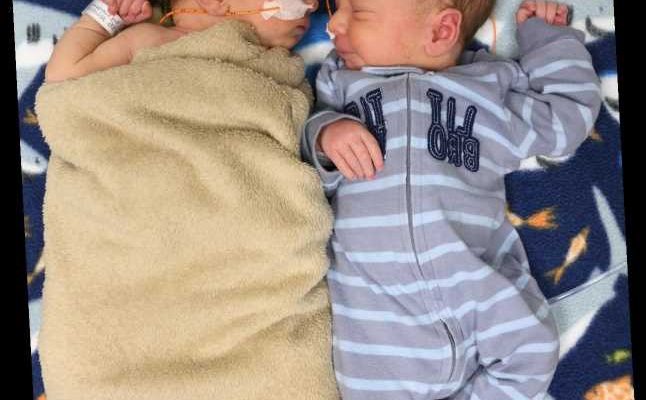 One Missouri hospital is seeing double!

In just this week, Saint Luke’s Hospital has welcomed 12 sets of twins, an amount the hospital says is the largest number of twins they’ve ever had at one time, and photographer Helen Ransom of Faces You Love captured precious images of all of them.

“We always see multiples in here, but not 12 sets at one time,” said Danielle Gathers, a nurse at the Kansas City hospital, according to CNN.

All 12 sets of twins were born between five and 14 weeks prematurely, and will all be sent home from the neonatal intensive care unit at various times over the coming weeks — but new mom Amanda Tollifer said that her “ultimate goal” is to have her set of twins home by Christmas.

The families who welcomed the twins came from all across Missouri and Kansas, the hospital said, including mom Jena Williams, who will likely stay at the hospital for another 11 weeks, until her original due date, ABC Action News reported.

While it might go without saying, nurse Kyla Anderson revealed that they’re all “very busy” taking care of all the little ones.

“We have 12 sets total, and it has been very, very busy. Lots of babies,” she added, according to ABC Action News.

But despite the hectic atmosphere, Jena’s husband Tyler had nothing but praise for the staff at Saint Luke’s.

“Everyone here at Saint Luke’s has been fantastic,” he said. “From the top down, I feel like we’ve had as good of an experience as we can expect dealing with our early birth.”

Anderson added that a sense of camaraderie has grown between the 12 sets of parents that have all welcomed twins.

“It’s really neat because these moms and dads have come in and they’re meeting other families with the same unique challenges that they have,” she added to ABC.

“It’s a really special opportunity that the nurses, the families, everyone around here at Saint Luke’s has really embraced and gotten to take on the challenge of having 12 sets of twins right now,” Anderson said.

While Saint Luke’s is experiencing a particularly high volume of twins, the Centers for Disease Control has actually reported that fewer twins are being delivered overall in recent years. Between 2014 and 2018, twin births declined by four percent, the hospital said.