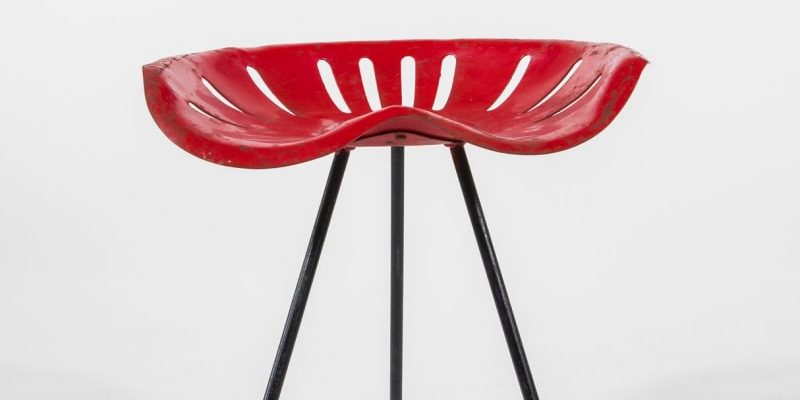 When the 1956 Olympics were fast approaching, Melbourne businessmen such as Ion Nicolades decided to spruce up their stores with the latest international style. To give his Anglo-American Cafe a makeover and transform the Bourke street landmark, Nicolades turned to Clement Meadmore, a rising designer in his mid 20s.

Meadmore's furniture had featured in magazines such as Domus and Architecture and Arts, and was recognised by local tastemakers such as textile designer Frances Burke and architects Robin Boyd and Peter McIntyre. 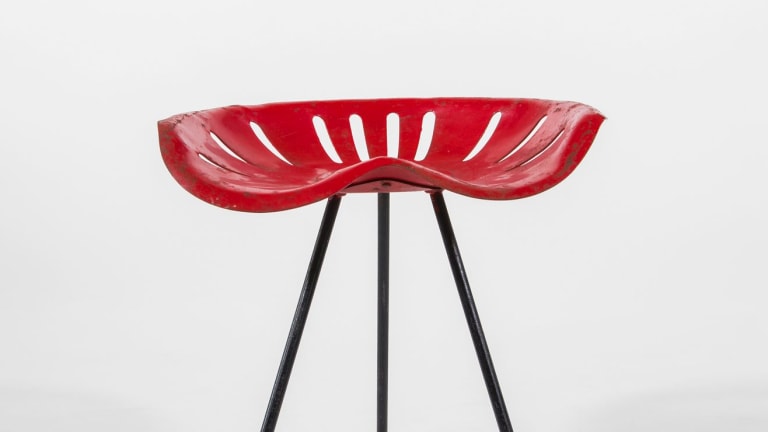 Nicolades knew him mainly as a fellow jazz fan. But from that partnership, the Legend Espresso and Milkbar was born. Another, the T house, would soon follow.

Much is made of emigre culture's influence on a more cosmopolitan Melbourne. But change came from within, too. Meadmore embodied the excitement and curiosity of post-war Melbourne. He thought big. Even before he became famous for his gargantuan, gravity-defying Corten-steel public sculptures, Meadmore had grand ambitions. 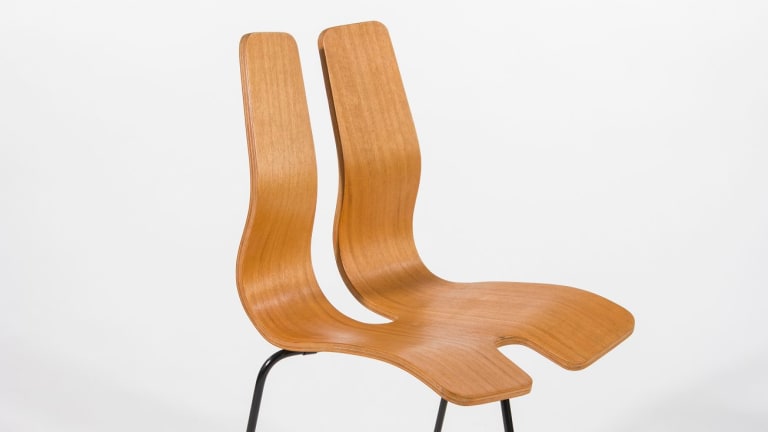 The three-legged plywood chair, 1955, plays on tension and suspense.

Without completing design school Meadmore embraced the gamut of design: furniture, graphics, textiles, interiors and storefronts. In the early 1950s, Meadmore quickly made a name for himself – then lost the right to use his name in a legal dispute with business partners. For a while he even worked under the pseudonym Anthony Crego. One thing Meadmore wasn't was a businessman. Disillusioned, he concentrated his efforts on sculpture, and in 1963 settled in New York City.

"Clem didn't really rate his design practice, he thought it was just something he did on the way to where he was going," says Dean Keep, co-curator of Clement Meadmore: The Art of Mid-Century Design at the Potter Museum of Art. "[But] his design practice is interconnected to his sculptural practice. They inform each other."

Alongside blown-up images of Meadmore's Legend and T house cafe interiors, the survey exhibition of his industrial design plays off the reductive palette established in his first Cord chair in 1951. Made from steel rod frames and simple colours, the Cord chair was Meadmore's attempt to translate the black lines and floating colour planes of Piet Mondrian's early paintings into three dimensions, according to Keep.

In a 1952 profile in Architecture and Arts, Meadmore declared that rather than "fill and obliterate volumes … furniture should enhance a feeling of space by its non-obstructing presence". With their thin sinuous steel black rods and coloured rope planes, Meadmore's chairs animate living spaces in the lightest ways. 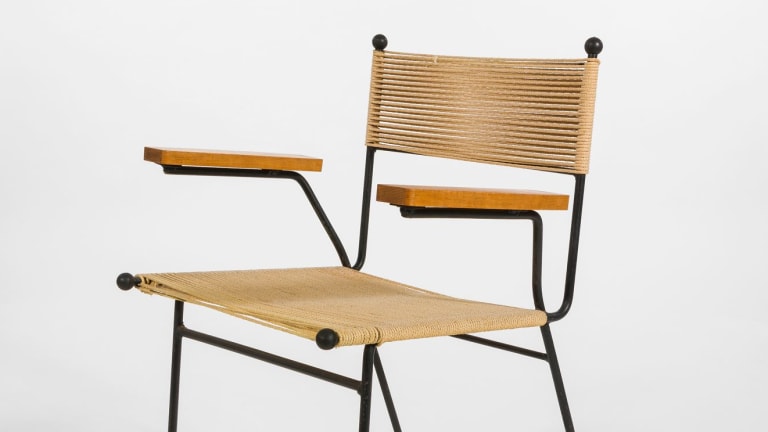 Starting and ending with inky plastic stoppers, his squiggly black rods also resemble line drawings, embodying Paul Klee's simple decree that "a line is a dot that went for a walk". The beauty of Meadmore's reductionism is that it allows multiple interpretations of his abstract designs. His glass table, for instance, also resembles a circuit board drawing.

The popular designs were readily copied. Actually identifying a Meadmore is one of the curators' ambitions for the show. "Anything made of steel rod has been called a 'Meadmore'," Keep says. "This is the first show with a definitive collection that says 'yes these were made by him'. They were designed by him and often made by him. It's the result of 10 years' research [including a State Library Fellowship]. For the first time ever we can say 'these are all by him'." Across five galleries, the Potter museum features more than 50 pieces of lighting and furniture, graphic design (including a decade of record cover design for Swaggie Records starting in 1954) and ephemera, including magazine profiles, his 1948-55 scrapbook and never-before seen sculpture dating back to 1948. 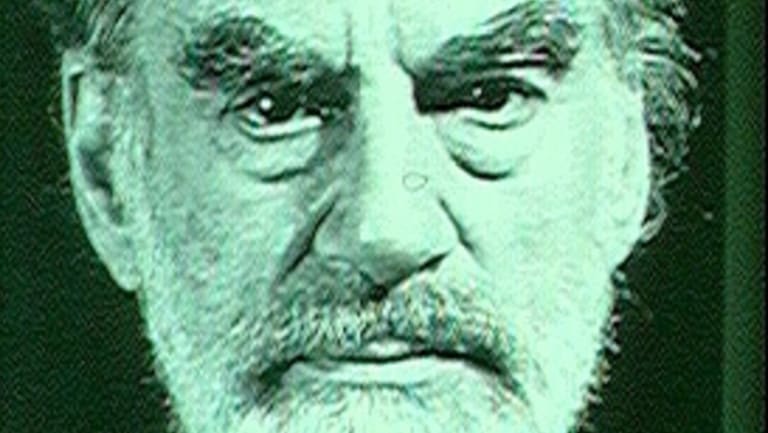 Clement Meadmore embodied the excitement and curiosity of post-war Melbourne.

"It's the first major survey of Meadmore's designs and a rare opportunity to see pieces that – with the exception of one table from the NGV – are from private collections," Keep says.

While the show's intent isn't to connect the dots directly between design and sculpture, "the art and design is inseparable", he says. Indeed parallels are inevitable. The fluidity of steelwork is readily evident across both art and design. Early signs of his more mature work can also be seen in the base of the Calyx lamps, whose angled steel contours allow it to lean forward attentively. Like his later more monumental sculptures, which play on tension and suspense in their sheer improbability, Meadmore's three-legged chairs also thrill – potential OH&S disasters in the making. 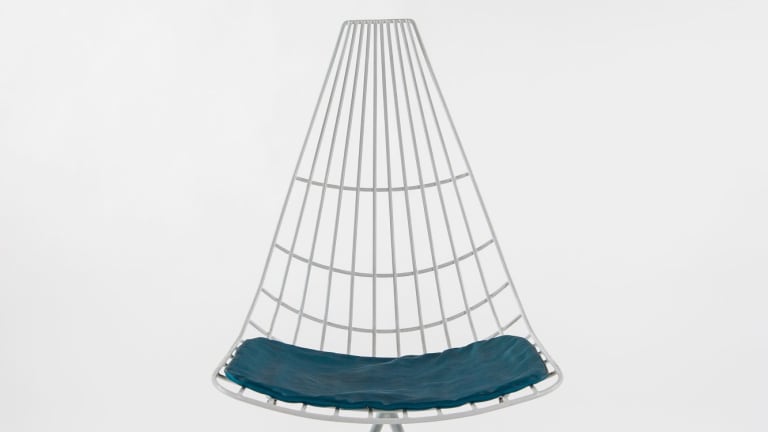 The show's main purpose is to recognise Meadmore's designs in their own right. From his first 1951 Cord chair to his last – the leather Sling chair – in 1963, co-curator Jeromie Maver encapsulates the work: "Meadmore's furniture is sculpture that you sit in." 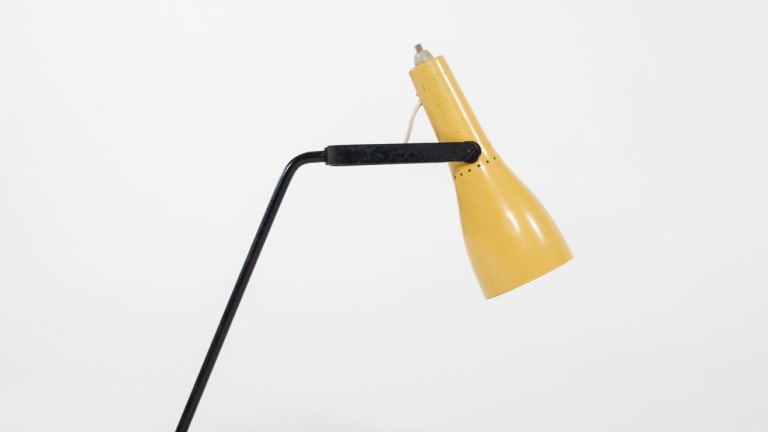 Calyx desk lamp, 1954. Early signs of Meadmore’s more mature work can be seen in the base of the lamps, whose angled steel contours allow it to lean forward attentively.