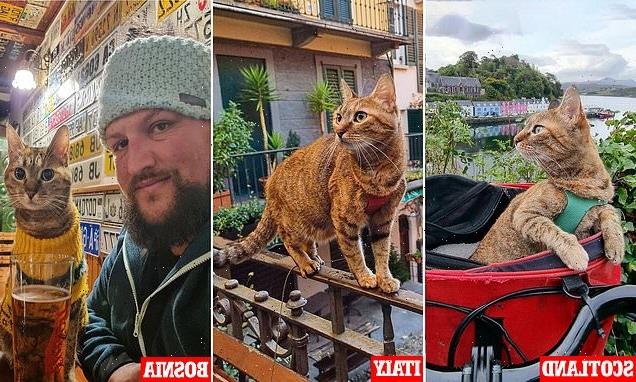 Feline adventurous! Scottish man reveals he’s taken his CAT to 29 countries – and is just one nation away from breaking the world record

A man and his cat have become a viral sensation since posting their worldwide adventures to social media.

Stacking up snaps from 29 countries in total, the adorable duo hope to break the world record for number of countries visited by one cat, which currently stands at 30.

Dean Nicholson, from Scotland, and his adopted cat Nala, have been inseparable since they met on a Bosnian roadside in 2018 when the tabby was just a kitten.

The Scot was on a solo bike trip and credits Nala with ‘changing his life’ after feeling uncertain at the start of his journey.

One of his long-standing fans is TV host Lorraine – who spoke to the cat lover today about his second book release, children’s book Nala’s world, which is an abridged version of Sunday Times Bestseller Nala’s world – the story of Dean and his companion on their travels – designed for adults. 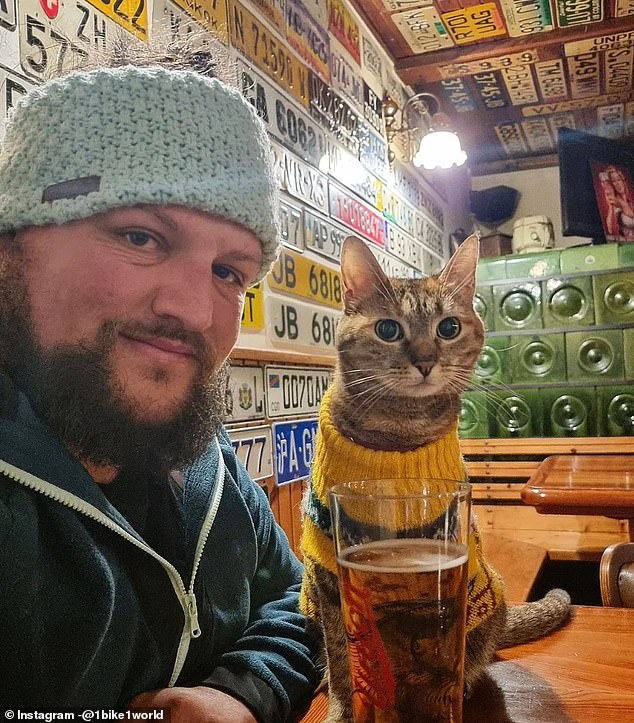 Nala and Dean in Bosnia, where they first met in 2018 on the side of the road. Dean enjoys a drink while Nala sits next to him wearing a winter jumper 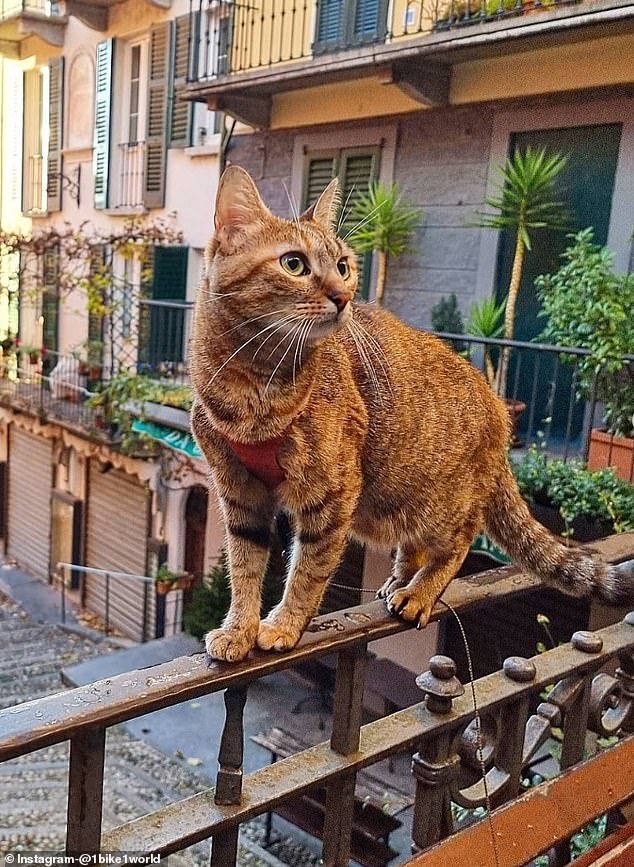 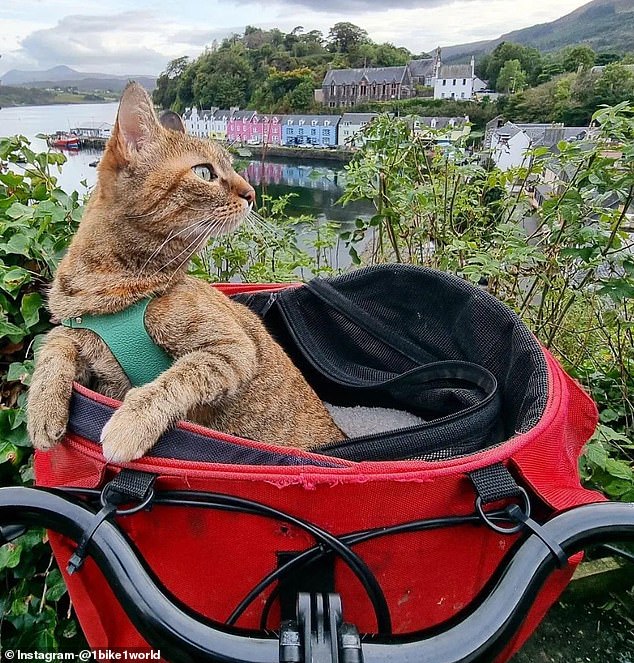 Back home in Scotland with Dean – the pair still travel by bike, enjoying the ambience of Scottish towns and villages

After bringing her back home to the UK, Dean decided he would take his tabby cat around the world with him, got her a feline passport and started up an Instagram called 1bike1world.

The page shows the man and his moggy, as they take in the sights of Greece, Albania, Italy and Slovakia – traveling mainly by bike and sleeping under starlight.

When staying at hostel, Dean revealed to his followers that having Nala with him can sometimes get them a room upgrade.

Dean posted to Instagram about their first encounter four years ago saying: ‘Vowed to Nala when I found her that I wouldn’t leave her no matter what and here we are, in the middle of a worldwide pandemic, away from home and not got a clue what’s going on but as long as she’s happy and healthy that’s all that matters.’

Speaking about when the pair first met Lorraine said: ‘I think you adopted each other!’

Dean explained how early on he didn’t think Nala was homeless – but very quickly she climbed atop his shoulder and would meow to get his undivided attention.

He said: ‘She loved being on the bike and in the fresh air all of the time, and now I’m just a full-time cat chauffer!’ 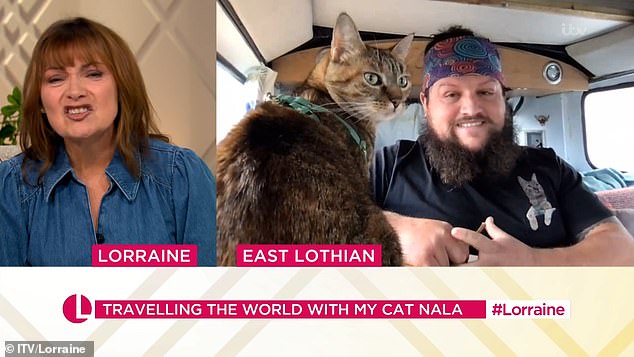 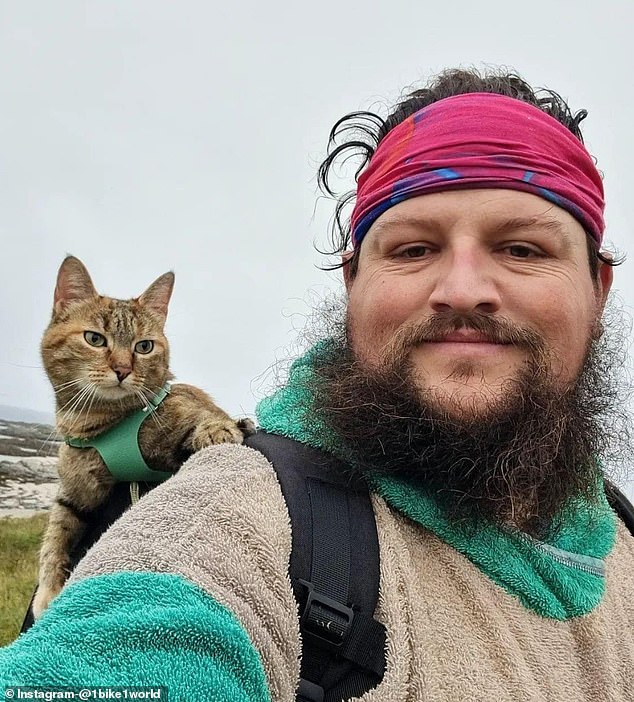 Dean and Nala travel the world by bike, and Nala’s favourite perch is on the top of her human’s shoulder 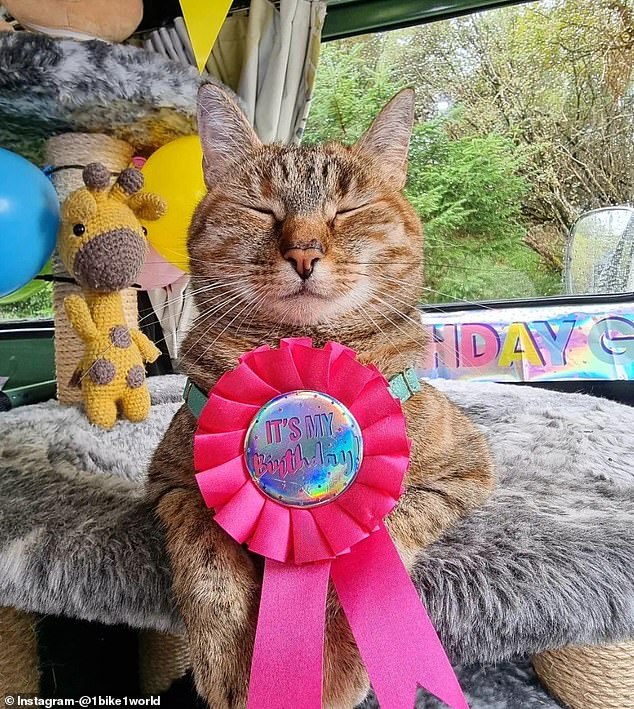 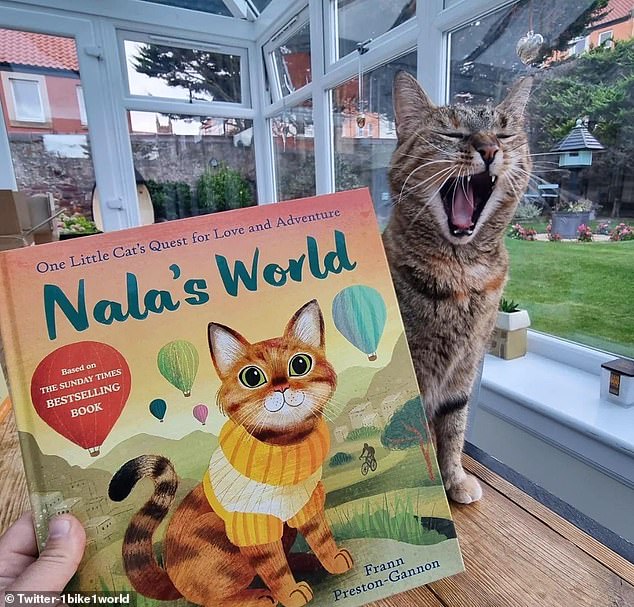 It’s not that boring! Nala yawns at her book Nala’s World – which is the latest book released by the pair, written by Frann Preston-Gannon

A worrying time for fans was Nala’s recent illness.

Lorraine said: ‘We were very worried when we saw that she was ill, she’s a young cat in the prime of her life.’

‘She’s four,’ Dean said, ‘We took her to the emergency vets for treatment and she had a wee swollen paw – thankfully she is fine now.’

The author also found another stray animal, a dog he named Baloo who he has rehomed and now lives in the forest of Dean in Wales. Helping animals is a passion of the traveller, and a part of his literary works about Nala.

He said: ‘There’s parts that tell you what you can do to help animals in need, and it’s something I’ve learned a lot about on this journey.

‘People love Nala and they send her stuff all the time, which is great, but instead they could make a donation to an animal shelter.’

After journeying 29 countries in total, Dean and Nala are back home in Scotland but have plans to get on the road again.

Dean said: ‘We are going to start travelling once more – we’ve done 29 countries and the world record is 30 so we have to beat that.’