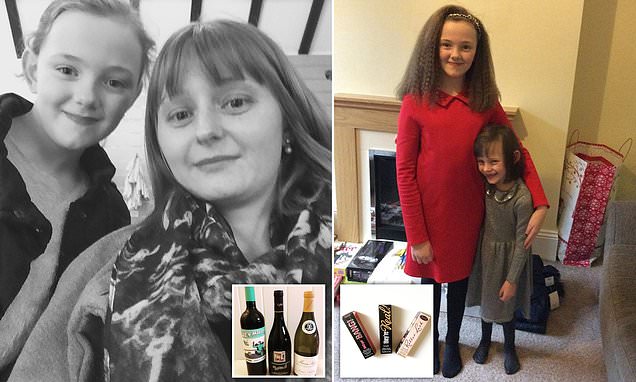 Savvy single mother is set to enjoy Christmas for FREE thanks to spending all year entering competitions, couponing and collecting freebies – after previously splurging £2K on gifts for her daughters

A single mother who previously got into debt by splurging up to £2,000 on festive presents for her daughters has managed to bag this Christmas virtually free – thanks to coupons and competitions.

Previously, Natasha Whitehead, 32, of Huddersfield, West Yorkshire, would spend the festive season feeling stressed about money, anxious to provide the perfect day for her girls, Bailey-Grace, 12, and Isabelle, nine.

But, after reading an online article about couponing – where someone collects discount vouchers to score as big a saving as possible – she decided to tackle this year’s celebration a little differently.

Beginning her preparations in January, Natasha stockpiled freebies or items she managed to blag for a fraction of the original price throughout the year – amassing presents worth around £600 for her family for next to nothing.

Natasha, who works at a junior school, said: ‘Christmas is difficult, as you want to be able to give your children everything and when they think it’s Santa bringing the gifts, they don’t understand why he can’t just make whatever they’d like in his workshop. 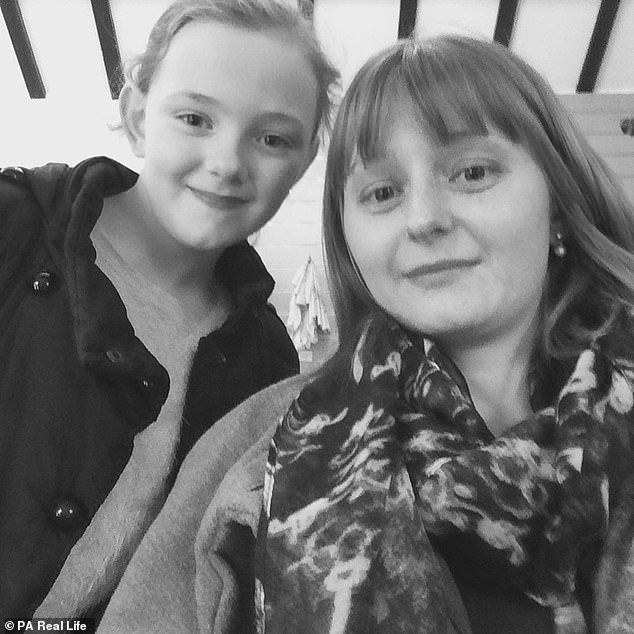 Natasha Whitehead, 32, of Huddersfield, West Yorkshire, pictured with her daughter Bailey Grace, has managed to bag this Christmas virtually free thanks to her love of couponing 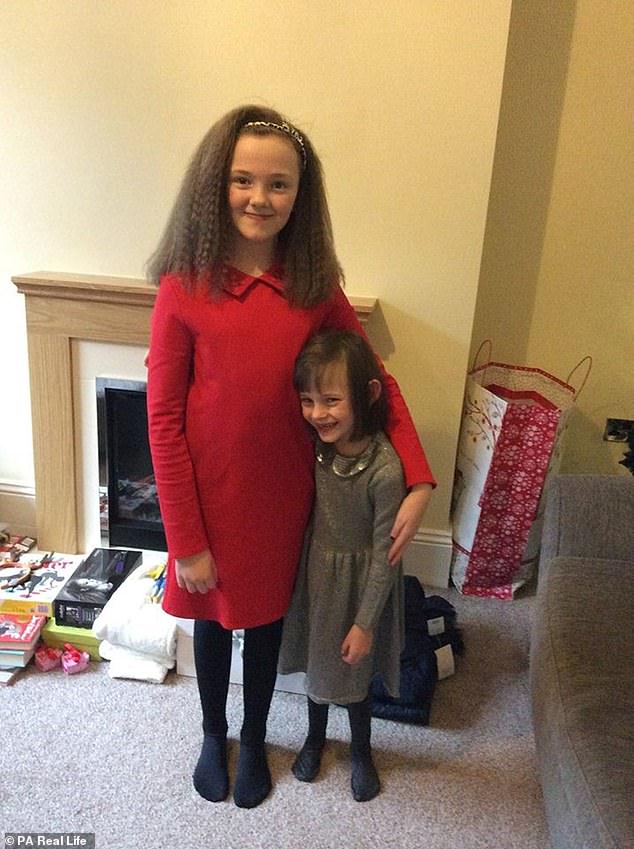 In previous years, Natasha got into debt splashing out £2,000 on presents for her daughters but this year she decided she wanted to spend less and focus more on the meaning of Christmas 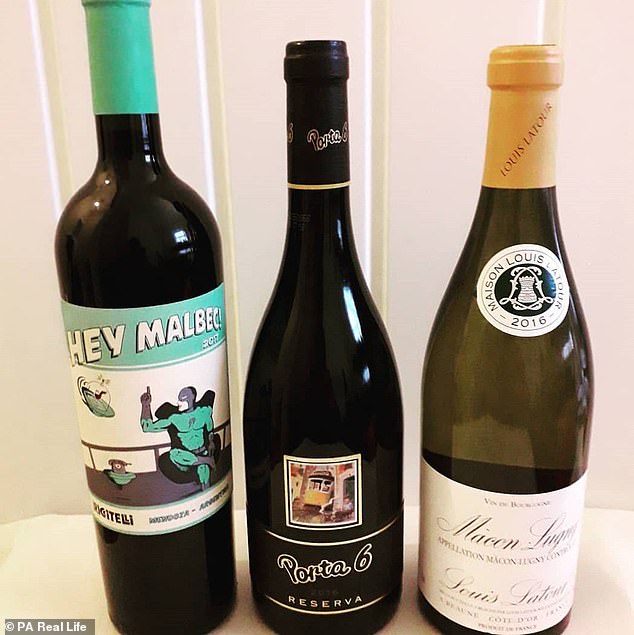 Free alcohol Natasha got with a Majestic Wine promotion, which would otherwise have cost well over £30 for three bottles

‘It’s easy to panic buy and spend far too much. In the past few years, I’ve ended up getting myself into debt, easily spending £2,000 on gifts that the kids get bored of opening half way through.

‘This year, I wanted to take things back to an old school family Christmas, and focus on appreciating the magic of the season, rather than stressing about money.’

While she had previously dabbled a little in money-saving tactics – using discount codes or entering online competitions – Natasha only decided to get serious about couponing at the beginning of the year.

Vowing in January to be as organised as possible, so her festivities would be close to free, she said: ‘When I first found out about the couponing world, it was by stumbling across a freebie that was being offered by a skincare company on Facebook. 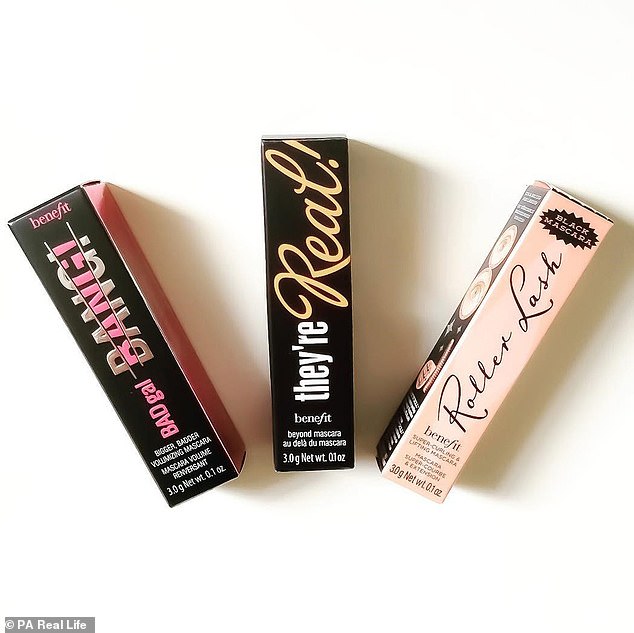 Benefit beauty freebies that Natasha scored. She first got into couponing in a serious way when she discovered a beauty company was giving away free products earlier this year

‘At the time, I didn’t understand why brands were just handing stuff out – but now I see that the savings are out there if you know where to look.

‘It gets almost addictive, seeing what else you can win or what other discount coupons you can find. It doesn’t just help me, either. I’ve managed to win food that I’ve donated to food banks.’

As well as entering online competitions – enabling her to buy some books as presents after winning a £50 WH Smith voucher, as well as food, thanks to a £500 Co-op voucher she scooped – Natasha also swears by cashback apps.

Soaring in popularity over the past couple of years, the apps work by inviting users to upload pictures of their receipts, which are then scanned, before money is given back on certain items. 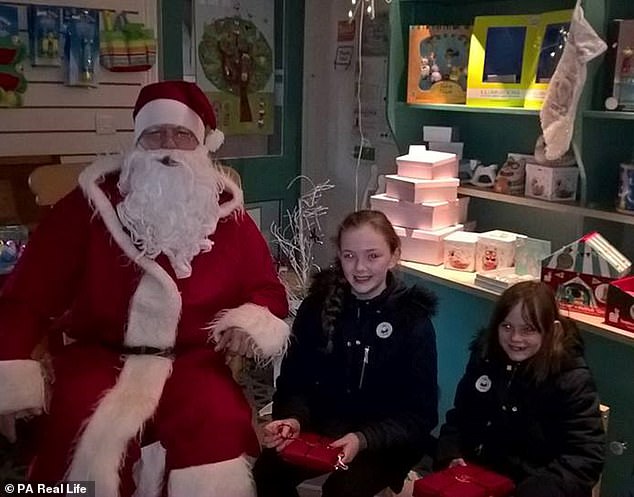 Bailey-Grace and Isabelle with Santa at Christmas 2016. Single mother Natasha said that she always feels pressure to make Christmas magical for her girl

‘If you’re smart and combine coupons with cashback apps, you can even make a profit,’ she said.

· Don’t buy for the sake of it. Just because something is in the sale, does not mean it is a bargain – especially if it is something you do not need.

· If you see a freebie, apply quickly. There are often a limited amount on offer, and they soon get snapped up.

· Be organised. If you put aside little bits here and there throughout the year, you will be totally sorted for Christmas by November.

· Be patient. Dedicate a little time every day to scrolling for coupons, and slightly longer for entering competitions.

· Don’t ignore your emails! Companies often send discount codes or vouchers for birthdays, or if you are newly registered to a mailing list.

‘You literally get paid to buy things you’d need to get anyway. Sometimes, they also offer freebies. I’ve managed to get some bottles of nice alcohol, which ordinarily would cost at least £20 each, and chocolates.

‘I’ve then put together little hampers as Christmas presents for people, made up of things I’ve been stashing throughout the year. I think it helps me to be more thoughtful in my gifts, as I’m not just grabbing something straight off the shelf in a panic. It’s more personalised.’

In addition, Natasha also has a number of store loyalty cards, which she has managed to build up enough points on to buy presents like beauty products and candle gift sets in shops she would have needed to use anyway.

And she regularly signs up to online mailing lists, to take advantage of the introductory discount codes they frequently offer.

‘The best is when there’s no minimum spend. I got a £5 Boux Avenue one the other day, which I got some really nice socks with. I also got a Jack Wills one, again for £5, which enabled me to get some lovely accessories for just 21p each,’ she explained.

‘I always opt to pick things up in store, too, to save on delivery. I’ll put aside one day when I go and collect everything, so I don’t have to go back and forth.’ 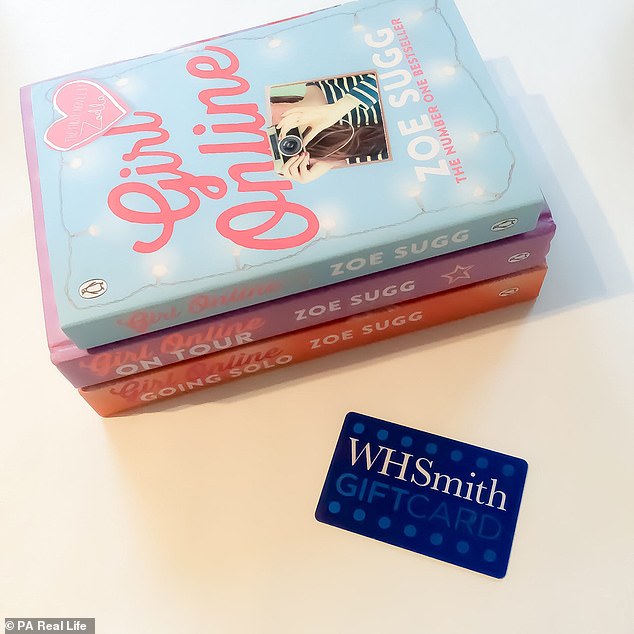 Presents for the girls: Books bought with a Â£50 voucher Natasha won in a competition 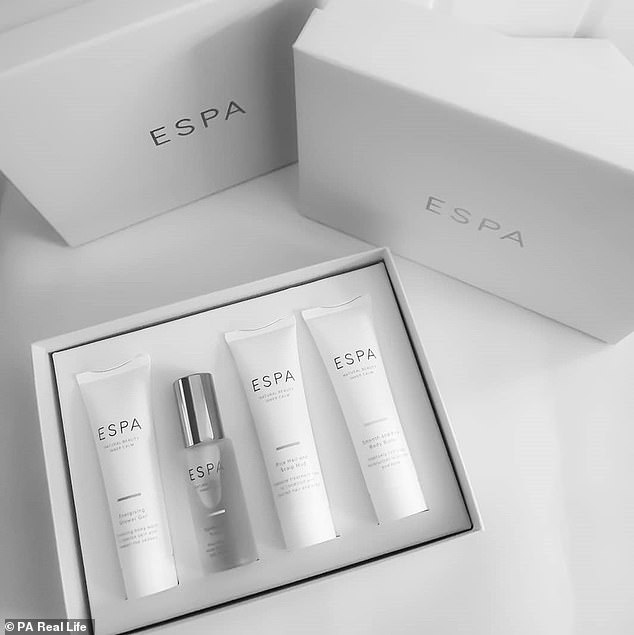 Luxury haul! £78 worth of beauty products that Natasha got for free via Simply Be Perks 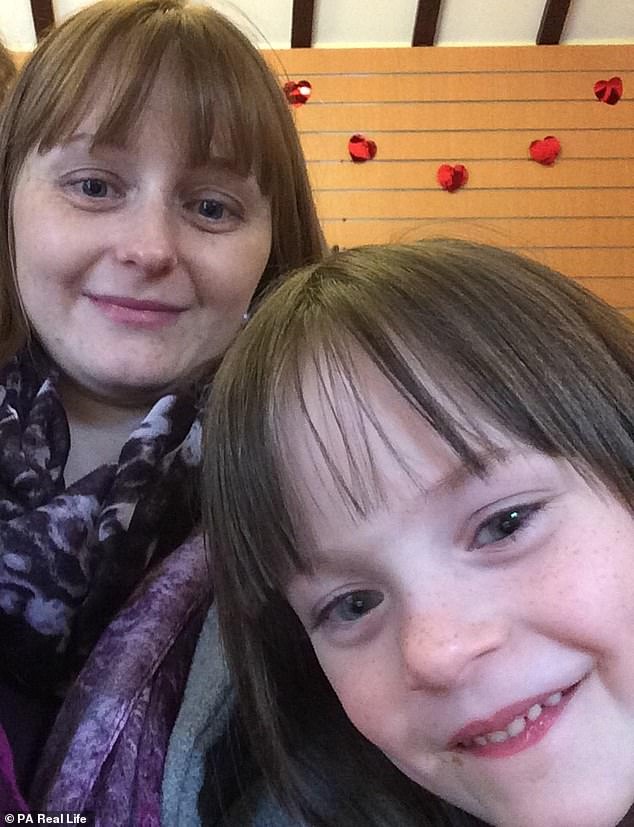 Natasha, pictured with Isabelle, devotes an hour every day to scouring the web for the latest freebies, competitions and money-saving offers

Explaining that, when it comes to money saving organisation is key, Natasha told how she sets aside time every morning to sit down with a cup of tea and scroll the web – in particular social media – for new deals.

She then checks again on her phone throughout the day, just in case anything new has sprung up, and regularly fills out online surveys in exchange for cash or high street vouchers.

‘I know lots of people can’t be bothered with sifting through emails, especially when you’re signed up to a lot of mailing lists, but it’s worth doing in case you miss a discount code,’ she said. 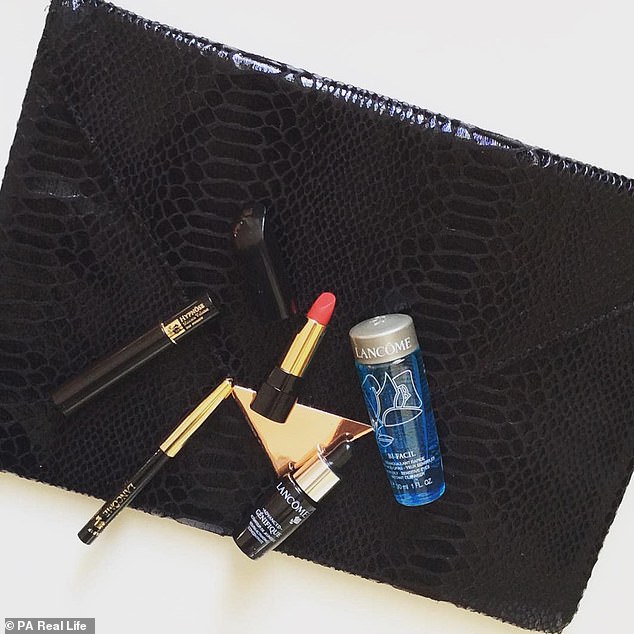 Lancome freebies Natasha won in an online giveaway. She’s been collecting items all year to gift to friends and family at Christmas 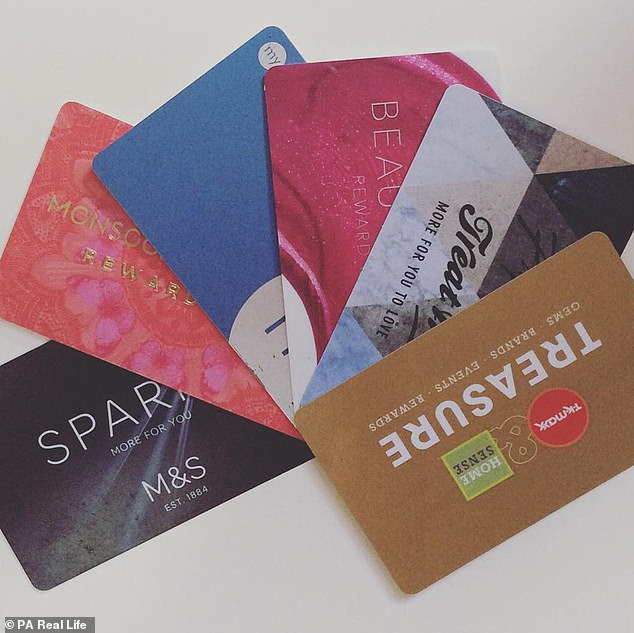 The savvy saver uses reward cards and shops she regularly visits to build up points, which she can then spend on Christmas presents 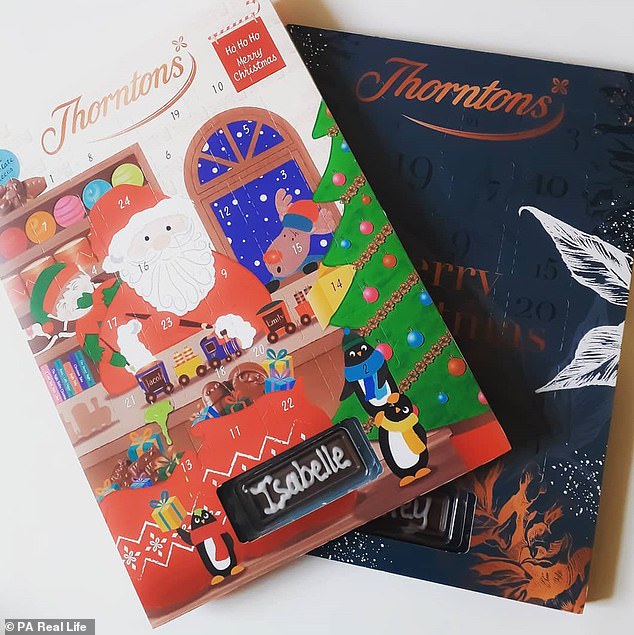 Free advent calendars Natasha got via O2 Priority, and had personalised with her two daughters’ names

‘The same goes for surveys, too. You can sit and fill them out in front of the TV in the evenings. It doesn’t need to take long, but it pays off.

‘I’ve even managed to get ahead with next Christmas and already have £40 worth of Love2Shop vouchers, which can be used in loads of different high street stores, to go towards it.’

Now, more or less finished with Christmas shopping before December has even begun, Natasha is looking forward to being able to properly relax and enjoy the season of goodwill with her daughters.

She continued: ‘If you can afford to splurge at Christmas then that’s fantastic, but that wasn’t me, and it was getting silly – the amount of stress I’d cause myself.

‘For the first time ever, I can actually sit back and enjoy it.

‘Christmas doesn’t need to break the bank – there are ways of saving money. You’ve just got to think outside the box.

‘This has also been a great learning curve for the girls. I like to get them involved, too.

‘The cost of living is going up, but wages aren’t. I dread to think what it’ll be like by the time they’re adults, so it’s important to learn now about being savvy.’