Zack Morris & Kelly Kapowski’s son, Mac, takes center stage in the new ‘Saved by the Bell.’ HL spoke EXCLUSIVELY with Mitchell Hoog about playing the child of a beloved TV couple, what to expect from Mac, and more.

There’s a new Morris at Bayside High when the new Saved by the Bell premieres on Nov. 25. Mac Morris is the son of the original show’s Zack Morris and Kelly Kapowski. Like his parents, Mac is one of Bayside’s most popular. HollywoodLife talked EXCLUSIVELY with Mitchell Hoog about how there’s more than meets the eye with Mac.

Mitchell revealed that Mac takes after both his mom and his dad. He admitted this his bond with onscreen dad Mark-Paul Gosselaar came about very “organically” as they filmed the reboot. Mitchell also teased Mac’s arc as Bayside welcomes new kids and the potential for a Mac romance in the first season. Read our Q&A below. 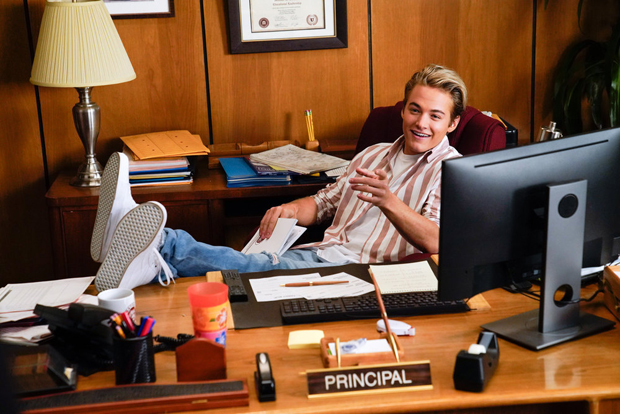 Mac Morris is the son of Zack and Kelly. Does Mac take after his dad or his mom?
Mitchell Hoog: I think he takes after both. His dad is busy a lot of the time, so I think Mac, through his pranks, is always trying to get attention from him. That’s what you’ll see when you watch the whole series that is congruent throughout it. And then with his mom, I think Mac has her soft side when the new kids from Douglas come in and an Achilles heel is shown. He kind of opens up and learns about himself a little bit.

You weren’t born yet when the show first premiered, but Zack and Kelly were one of TV’s most popular couples. Did you feel any pressure at all playing their son in the show?
Mitchell Hoog: No, I didn’t. When I got it, I didn’t feel any pressure. But then once we started filming and kind of getting into it and having people reach out and show their appreciation for the original, I think there was a little bit [of pressure]. But I never felt any big pressure that was hindering because the original cast and kind of my perception of it was I knew I was filling shoes, but I also wanted to make my own character and create what Mac would be like with a dad as a governor and what that privilege brings. I kind of created it myself, but I never felt this pressure to live up to anything.

The trailer shows a funny scene between Zack and Mac. What was it like working with Mark-Paul Gosselaar and trying to make sure you both seem like father and son, but you’re still creating your own character?
Mitchell Hoog: That came very organically, actually. We both had very similar interests. I think we hit it off on that. From there, once you get comfortable with somebody personally, it makes acting very easy. Of course, we had conversations on what he did in the original and his thoughts on that. But it was just very organic in how we formed that. Tracey Wigfield, our showrunner, wrote in a relationship that was very fluid and easy to comprehend, so there weren’t a lot of questions, except the ones that we kind of came up with our own imagination. 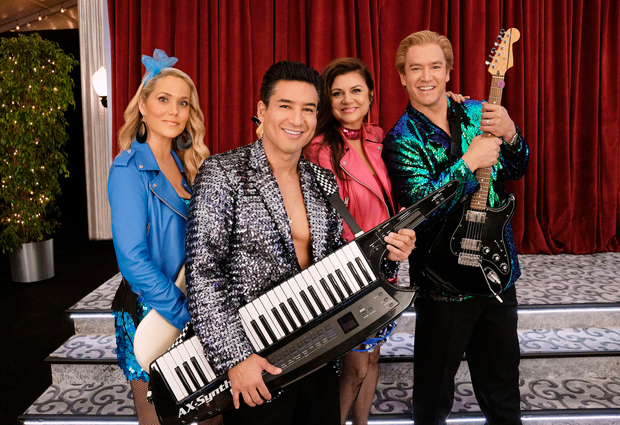 In the original series, there was Zack and Kelly, but also Jessie Spano and A.C. Slater. When it comes to the reboot, is there a potential for romance for Mac in the first season?
Mitchell Hoog: There’s always the potential for romance with Mac. But I also think that he’s constantly looking for attention from multiple people. So I don’t think he’s the relationship type because he needs attention from every set of eyes in the hall compared to just one.

When it comes to Jessie and A.C., what is Mac’s relationship like with them since they teach at Bayside but are also friends with his parents?
Mitchell Hoog: Mac has a very interesting relationship with everybody in this school because he’s in his own little Mac world. He does what he wants. He doesn’t go to class. If he doesn’t want to take a test, he just pulls a prank to get out of it. I don’t want to say everybody is scared of him, but I think a lot of the time, they know who his parents are. He’s always had the upper hand in some sense, especially with Slater. There are multiple conversations throughout the series about that, his relationship with Mac’s dad, and kind of how he relates to that and uses that to his advantage. 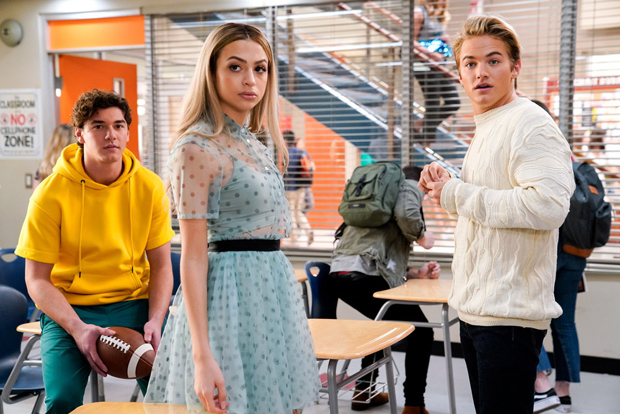 How does Mac take to the kids from Douglas who come to Bayside?
Mitchell Hoog: In the beginning, Mac tries to impress them. He tries to show them his privilege and flaunt his abundance of resources. He kind of goes through this whole thing of trying to almost prove himself to them. And then throughout the whole storyline, they show him that they really don’t care about that. It’s not that it’s wrong, but he could be doing better with what he has, the resources that he has, and using them for a better cause. They kind of pop that little privilege bubble that he lives in and show him that there are things outside of himself that he should care about.

On another note, you’re starring in and producing the anthology film After Masks, which was filmed in quarantine. What inspired this project?
Mitchell Hoog: So it started with a couple of friends who are all in the industry, and we just started having conversations about what we’ve been thinking about and going through. People started writing short stories, feature films, and different things. We all came together and said, hey, let’s join forces and make one thing. I wrote the logline that I narrate throughout the whole story. It’s six different stories all put together that don’t touch on just a pandemic or what’s going on kind of in the objective realm, but it touches on what we go through mentally, physically, spiritually, emotionally, because that’s not really touched on. Because when you are alone and life is not considered normal, things do come up. Different things from the past, or if you’re dealing with grief, shame, or any of that. So each story touches on that in a different sense. I think people will really relate to it because I think all of us went through a time in quarantine that may not have been the most joyful time.

Was this a cathartic experience for you?
Mitchell Hoog: Yeah. I learned a lot through doing the whole After Masks thing throughout quarantine, like dealing with certain things that come up, put it in story form, and be vulnerable to talk about it to other artists and see what they do with it. I think that’s a really interesting dynamic.

With so many people quarantining from home, production must have been very different. What was that process like for you and your co-stars?
Mitchell Hoog: It was a very collaborative experience because we did all the filming on our own because we couldn’t have a 100 percent film crew. So at one point, we had different people filming in three states in their homes, directing over Zoom, producing over Zoom, and having conversations throughout the day about how it’s going and what we can improve on. It was a very collaborative, hands-on process that I think everybody enjoyed. And then also feeling the weight of each actor being a director, EP, and all that for the day, I think people underestimate how precious each one of those jobs is.