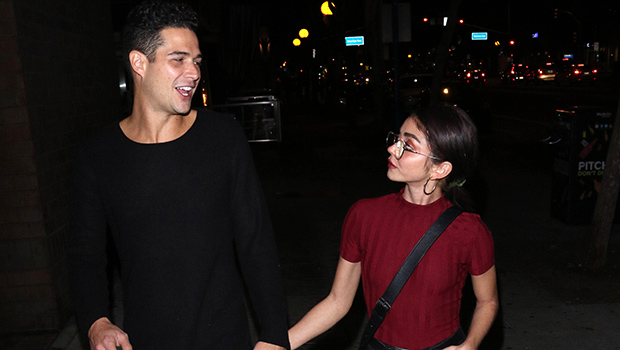 After Wells Adams’ sweet message to Sarah Hyland, fans want to know: when are they getting married? As we’ve EXCLUSIVELY learned, things have gotten serious and they both think they found ‘the one.’

Wells Adams, 34, left everyone swooning after his adorable message to Sarah Hyland on her 28th birthday. “You’re perfect and I love you the most,” he said, and many were wondering if he may have gotten her a diamond ring for her birthday. Such a gift may not be that far off, as a source EXCLUSIVELY tells HollywoodLife.com that Sarah “has truly never been happier than she is being with Wells. They recently moved in together in LA and they love to do things like cook for one another. He’s so nurturing towards her and coming off of her last relationship, she really values that.”

“He has the biggest heart and is so easy going and Sarah loves everything about him,” the source tells HollywoodLife.com. Because things have been going so good, the source says that they’ve discussed taking “the next step” in their relationship. “They’ve expressed to each other already that this is it and they’ve each found ‘the one’ in one another. They’re getting pretty serious.”

“It is a foregone conclusion that engagement is near,” another source EXCLUSIVELY tells HollywoodLife.com. They’re looking forward to being engaged, but the source adds that “she would like to get married after Modern Family ends because she wants to have her entire focus on the wedding without the emotions of the show she grew up on ending.” So, if Modern Family’s rumored Season 11 is a go, it might prolong their marriage dreams of becoming a reality.

Even with this potential wrench in their matrimony plans, the second source says that Sarah and Wells’ relationship is “very strong, very loving and there aren’t any problems. So their focus on continuing that is very important. Things just really work with them, so everything that is happening in their relationship has happened naturally and they are looking forward to riding that wave. They are very very happy!”

Sarah first developed a crush on Wells while watching him on The Bachelorette, the first source EXCLUSIVELY tells HollywoodLife.com. “She was actually the one who made the initial meeting happen.” It’s a good thing she did that because it turns out that they’re a perfect match for each other. “They’re total homebodies and love to just hang in and watch movies and cuddle on the couch together,” the first source says. “It’s so nice to see Sarah so happy after everything she’s been through. Wells takes the best care of her and she’s fully aware of how great this relationship has been for her.”