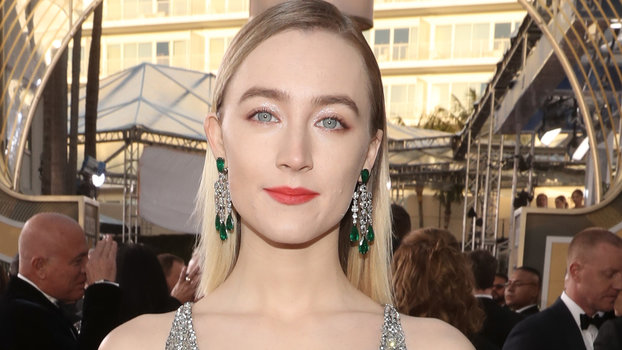 Saoirse Ronan’s no stranger to the red carpet — she’s been walkin’ ‘em like a pro since she was 13 (see adorable munchkin below).

Like most high-profile actors, the 24-year-old’s style has evolved considerably since she began slaying the awards circuit over a decade ago.

While Ronan’s not nominated for a Golden Globe this year (a grave mistake, if you ask me), Mary Queen of Scots’s titular lead is presenting at the ceremony.

As expected, Ronan proved she didn’t need to be nominated to make a sartorial statement at the awards show. Clad in a plunging silver chainmail halter gown, the Irish actress walked the red carpet with a quiet confidence and grace. With her platinum locks worn straight and her ears adorned by a pair of vintage-looking diamond and emerald chandelier earrings, Ronan gave us major Prohibition vibes.

After three nominations (in 2008, 2016, and 2018), Saoirse won her first Golden Globe last year for her performance in Greta Gerwig’s directorial debut, Lady Bird. In deference to the all-black dress code set by the Time’s Up movement, Ronan wore a sleek black Atelier Versace column gown with a single sleeve and glittering silver geometric patches at her opposite hip and shoulder. She wore her platinum locks in a slicked-back modern ‘do, which she complemented with a pair of diamond and sapphire dangling earrings.

When she was nominated in 2016 for her performance in Brooklyn, she took a more traditional approach in an ethereal white Saint Laurent gown with an empire waist and train trailing down the back.

We can’t wait to see what you serve up next, Sersh.