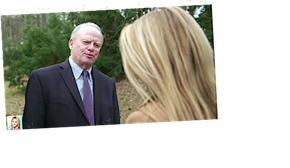 When all is said and done this primary election season, some Republicans will vote against Donald Trump — just like they did the last time.

Samantha Bee talked to one of them on “Full Frontal” last week while doing a mop-up of Super Tuesday. She found a 45-year registered Republican Never Trumper, a class of voters Trump has described as “human scum.”

“You gonna make me say on national television that for the first time since I was 21 years old I voted for the Democrat candidate for president?” the voter asks Bee.

Bee pretends to get hot.

“Just give me that moment,” she said.

“I voted for Hillary Clinton,” he said. “It was not a happy moment.”

Bee then predicted how she would feel if former New York City Mayor Michael Bloomberg had turned out to be the Democratic candidate.

Check out the voter angst in the video above.