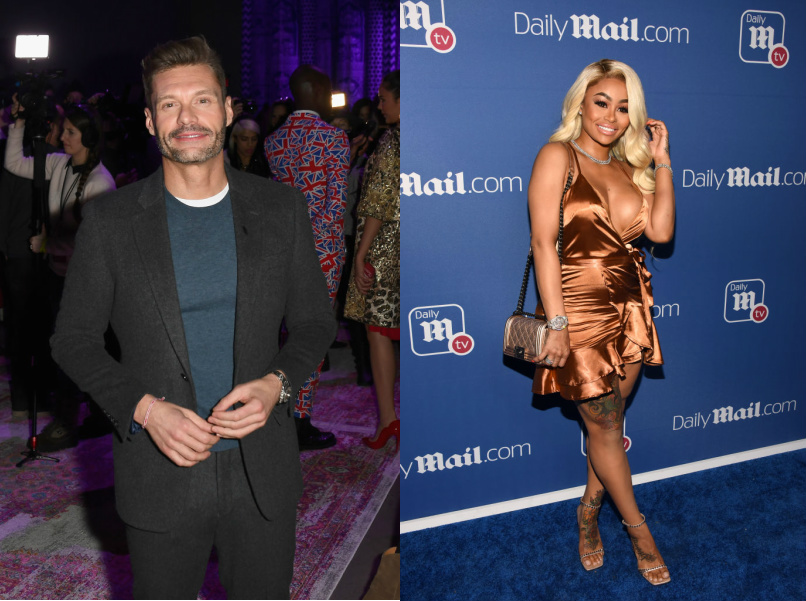 Blac Chyna is still in the midst of settling her lawsuit against the Kardashian family.

However, the model and reality star just added another person to this ongoing case.

Blac Chyna has recently asked the court to compel television personality Ryan Seacrest to submit a deposition in order for her to prove he played a part in the cancellation of her show, Rob & Chyna.

Seacrest was served with a subpoena

Over the past few months, Blac Chyna has been in a hefty court battle with the Kardashian family.

She claims that the Kardashian family purposefully got her reality television show canceled and is now including Ryan Seacrest in the mix.

The former reality star claims that Ryan Seacrest “had direct involvement in, and has personal knowledge of, the specific events that gave rise to this litigation.”

Since Ryan Seacrest was an executive producer of Rob & Chyna, Blac Chyna feels as though he, along with the Kardashian family, should be held responsible for the cancellation of her series that only ran for one season.

Days before Ryan Seacrest was scheduled to appear in court, the television personality revealed he had, “little to no direct involvement with the production of Rob & Chyna.”

Ryan Seacrest has yet to appear in court ever since Blac Chyna y served him with a deposition subpoena in December 2018.

The document read, “This Motion was necessitated by Ryan Seacrest’s ongoing and improper refusal to personally appear for his deposition,” the documents read. “Mr. Seacrest was an executive producer of the Rob & Chyna show and he is a percipient witness who was directly involved in and possesses personal knowledge of the events that gave rise to Ms. White’s lawsuit.”

Along with the subpoena, Blac Chyna is also asking the court to award her $3,255 in monetary sanctions from Seacrest.

Blac Chyna is suing the Kardashian family for defamation

Blac Chyna is currently in the works of taking Kris, Kylie, and Khloe Kardashian to court for getting Rob & Chyna canceled and publishing defamatory materials about her.

Chyna is also accusing Rob Kardashian of making defamatory comments about her, as well as assault and battery.

In December 2018, emails between Kylie Jenner and Khloe Kardashian surfaced as they discussed ending Rob & Chyna due to Blac Chyna’s ongoing drama with their brother.

Kylie Jenner wrote, “The only reason Chyna wants to be with my brother is for this show. She does not love Rob and their relationship is too fake and destructive.”

Khloe Kardashian felt the same way as her sister and wrote, “The sisters are clearly concerned and uncomfortable for our brother’s safety and the credibility of the brand at this point due to how they [Rob and Chyna] are both tarnishing it. … We are even considering not moving forward with our show if theirs continues. That’s how strongly we feel this is damaging to our family.”

Rob Kardashian dated Blac Chyna on-and-off for the majority of 2016. Since their split, the two celebrities have been in a lengthy custody battle over their two-year-old daughter, Dream.