For one night only, the Wild West went to the West Coast!

Clad in cowboy boots and wide-brimmed hats, the boisterous crowd cheered along as Runaway June delivered a powerhouse performance of their rich harmonies and chart-topping hits. The musical trio – consisting of Naomi Cooke, Natalie Stovall and Jennifer Wayne – are currently on Luke Bryan’s Proud to Be Right Here tour. All three vocalists gushed about sharing the stage with the American Idol judge. “He is just the best of the best. He makes us all feel so wonderful,” Natalie exclusively told Us Weekly. “It’s such a good vibe. It immediately felt like family.” 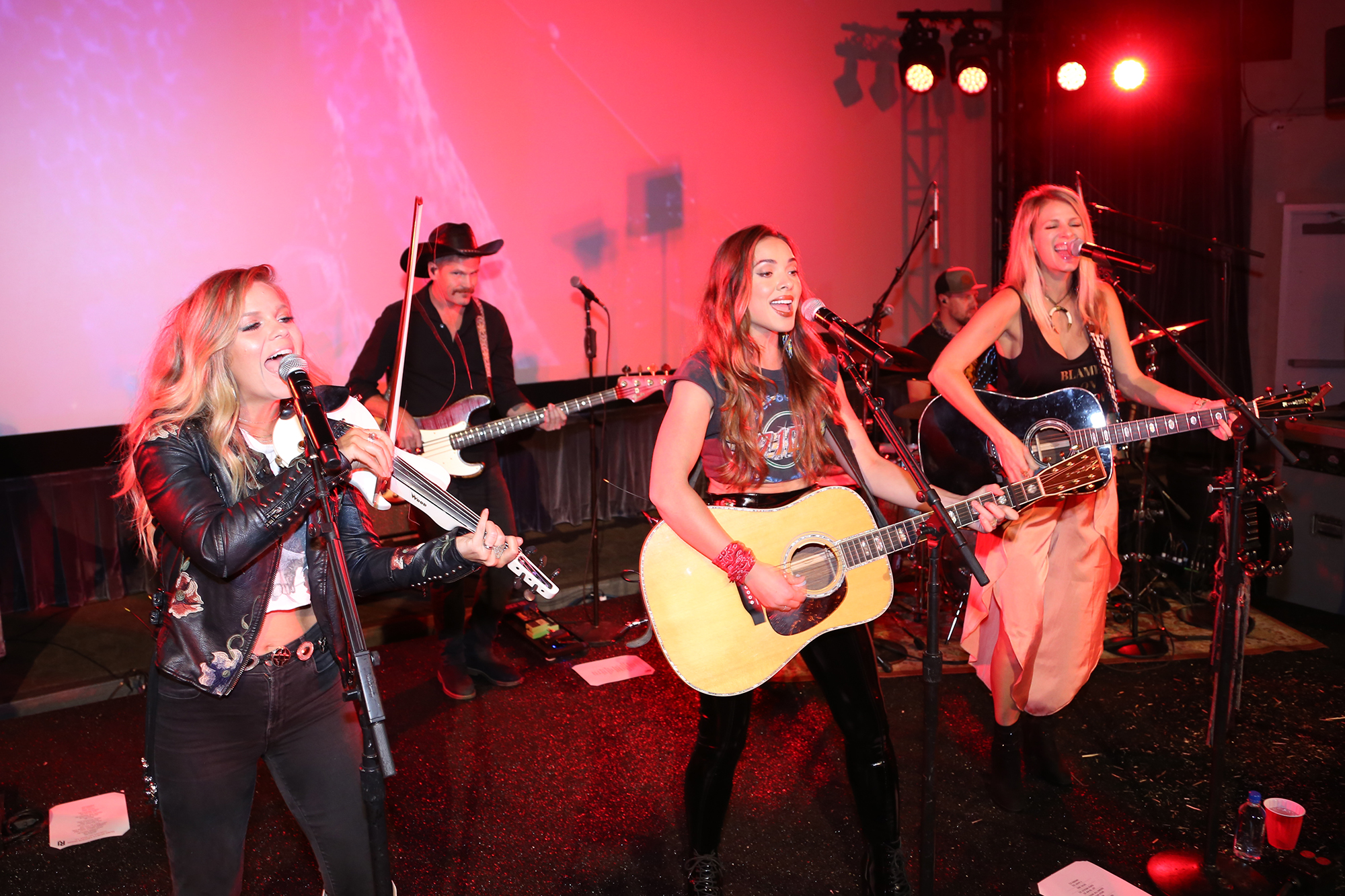 Thursday’s special concert event in Corona del Mar was truly a family affair – as a granddaughter of John Wayne, Jennifer said it’s the “best feeling in the world” to be upholding her grandfather’s legacy. (Runaway June’s song “Wild West” pays tribute to John Wayne: “Go out guns blazing just like ol’ John Wayne.”) Also in attendance was Ethan Wayne, Chairman of the John Wayne Cancer Foundation and the youngest son of John Wayne.

Ethan created Duke Spirits in honor of his father, who was passionate about sharing liquor with loved ones. Crafted authentically, this new tequila is a nod to The Duke’s favorite drink. And Duke Spirits gives back to the John Wayne Cancer Foundation, as the late actor suffered from lung and stomach cancer himself.

At the start of the evening, Duke Spirits founder Chris Radomski presented Ethan with a pre-donation check of $50,000 for the John Wayne Cancer Foundation. The contribution will continue to fuel cancer research, education, awareness and support. 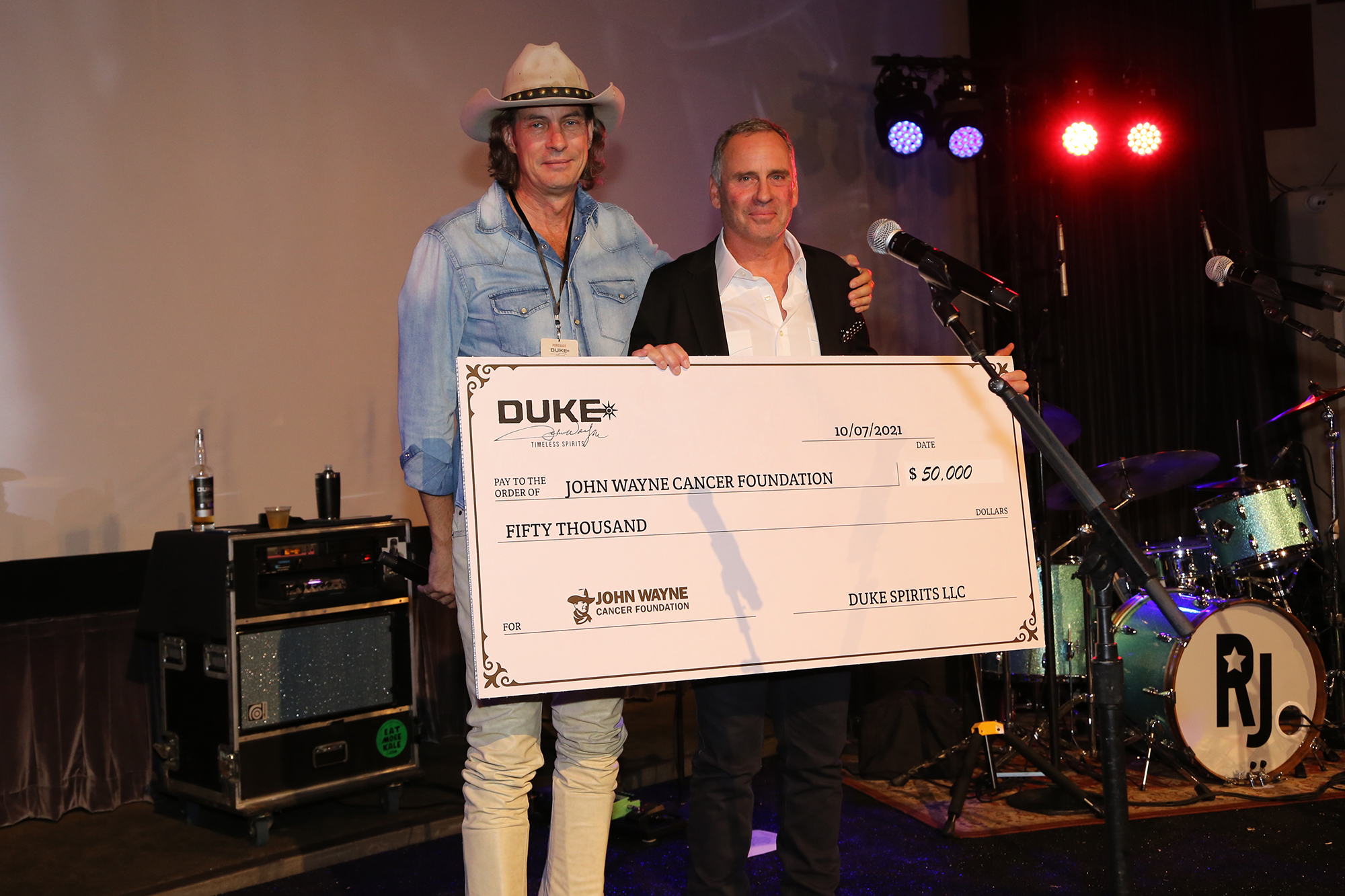 The philanthropic organization’s mission is to bring grit to the fight against cancer. John Wayne was the epitome of True Grit, which just so happens to be the name of the film that earned him an Academy Award for Best Actor. As the Oscar winner once said, “Courage is being scared to death and saddling up anyway.”

Ethan opened up about his father’s struggle with cancer, telling Us, “I saw a great strong man have to fight a disease that was very difficult.” Rather than spending his last days in the comfort of his own home, John Wayne battled cancer like the Western hero he was. “He let [doctors] try some experimental treatments on him, and it was not the easy way to go,” Ethan told Us.

“My father died 40 years ago. He probably thought people thinking about him would just fade away,” Ethan added. “I think he’d be shocked and humbled by the fact that we’re still gathering in his name and in his honor to celebrate a product that bears his name, image and likeness.”

On Runaway June’s tour bus prior to their performance, Naomi revealed that the “Buy My Own Drinks” singers sip Duke tequila almost every night. Raising a glass in spirit, Jennifer saluted her grandfather. “Toast to the Duke,” she said. “We’re in his hometown and playing the show for what he loved the most, helping people.”

“Toast to be beating cancer,” Cooke added. We’ll cheers to that.