The coin maker is giving fans a chance to get their hands on updated versions of the A to Z 10 pence pieces by releasing another 2.1million into circulation from today. 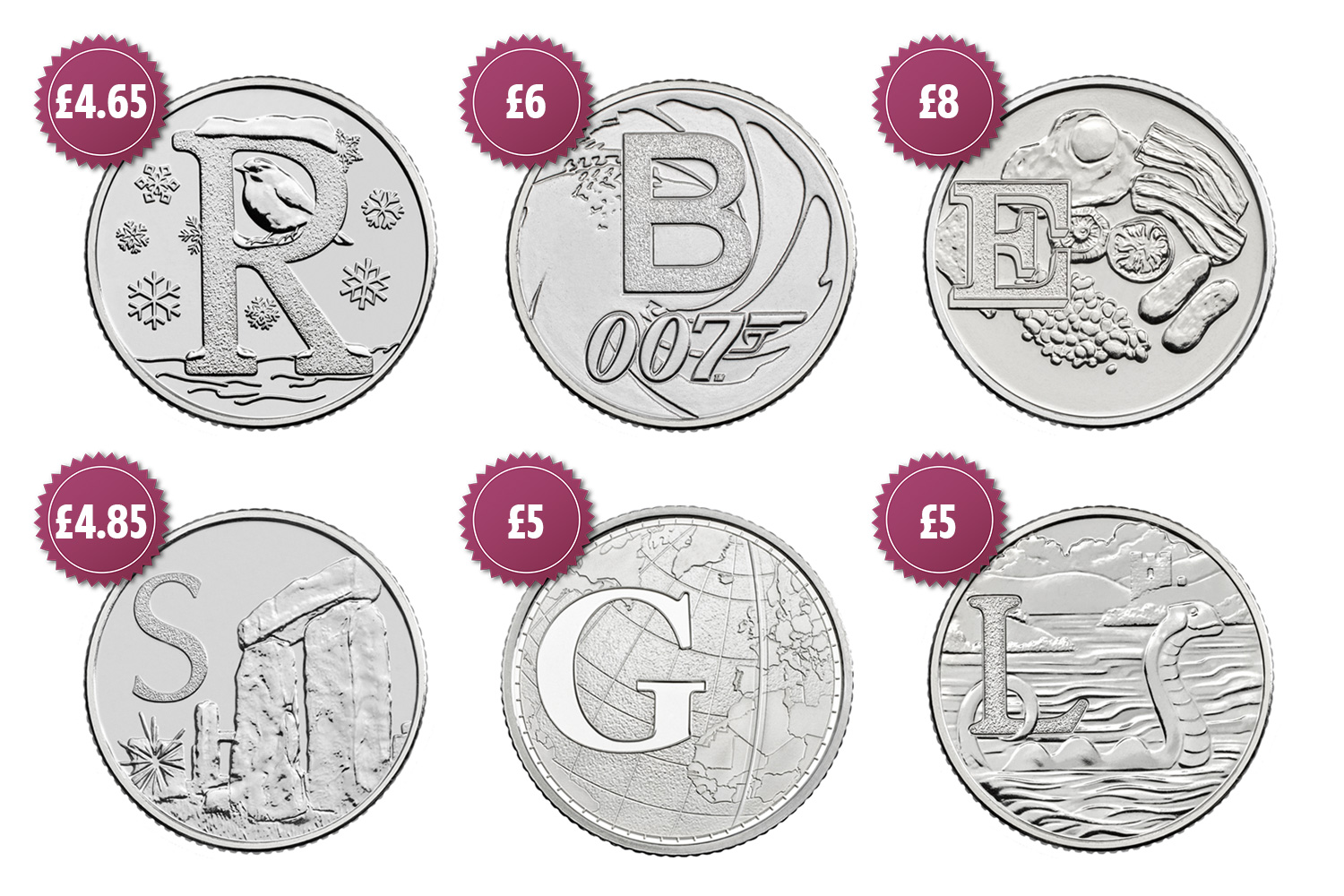 A full set features 26 coins – one for each letter of the alphabet – and celebrates the best of British with designs including James Bond, a game of cricket, fish and chips and a cuppa.

They were first launched into circulation in March last year, and even though there were 100,000 of each – 2.6million all in all – coin collectors still snapped them up for inflated prices online.

The coins will look exactly the same as the original batches from last year, only this time they will have a 2019 stamp next to the Queen's head.

Expert Colin Bellamy from Coin Hunter reckons that even though there will be more of each coin available, some collectors will be searching for two complete sets with both dates on them, meaning each coin could be just as valuable. 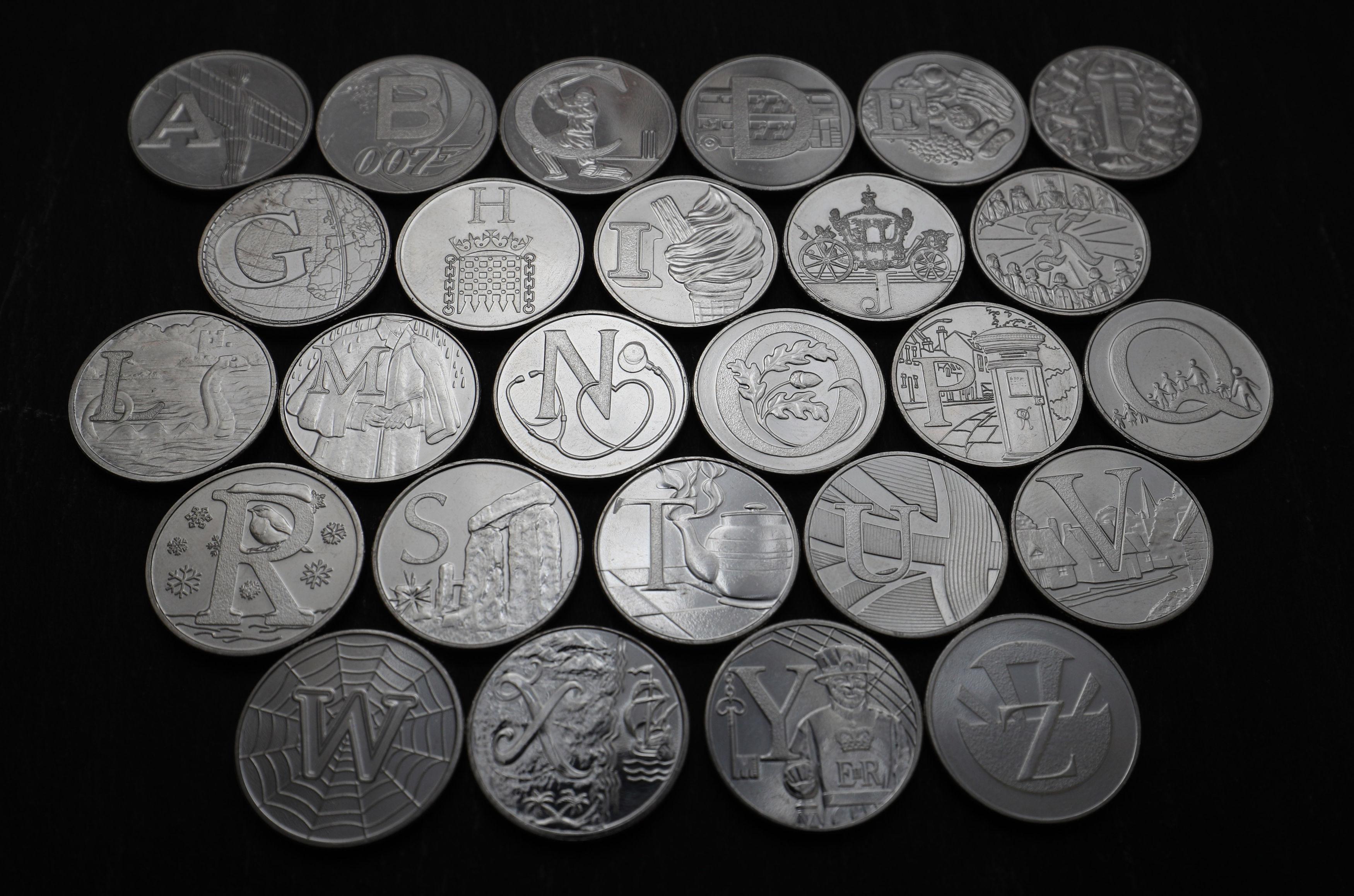 One year on, we've had a look online to see which coins are worth the most by looking at the highest price circulated ones recently sold for on eBay.

You should consider these figures more as a guide to what you can expect to get although it's not guaranteed.

E, for English Breakfast, still tops the charts – you can expect to fetch up to £8 for one on eBay.

The next best seller is B – the James Bond coin – and sells for around £6 at auction while the letters G and L – Greenwich Mean Time and Loch Ness Monster – sell for £5 each.

Of course, uncirculated versions of the coin sell for the most as their near-mint condition makes them even more valuable to collectors.

A-Z of Britain in coins – what do they represent and how much are they worth?

But they will also cost you more to get hold of – you can buy uncirculated versions directly from the Royal Mint for £16 each.

The coins will be rolling into circulation from today so you should keep an eye out should one turn up in your change.

Nicola Howell, from The Royal Mint said of the coins: "It will be one of the most limited issue coin designs for 2019 to be released into circulation, so to complete the collection we also have an exclusively designed 2019 A to Z collector album."

But Colin added: "It's frustrating to see that the Royal Mint has released even fewer of the coins than they did last time.

"You're already very unlikely to find one in your change, let alone one of each letter.

"Even if you do find one in your change though, it may only be worth around £1.50 so it may sound great but you're not going to be a millionaire."

Last time, the demand to buy the new 10ps was so fierce on the morning that they launched that the mint website actually crashed.

Ahead of the release and with the help of a letter-expert, we predicted that the letters E, T, I, O, A and S would be worth the most and we weren't far off.

Coin mad collectors can also now get their hands on a brand new 50p coin celebrating the children's book character, The Gruffalo.

The Royal Mint celebrated half a century of the 50p coin with a set of five collectable coins launched last month, including the Kew Gardens design worth up to £160 online.

A new Brexit coin has been announced by the Chancellor and it could end up being worth hundreds of pounds.

The dangers of selling your coins on eBay

The most valuable coins are usually those that have low mintage numbers or those with an error.

These are often deemed the most valuable by collectors.

Once you’ve found out whether the coin is real or not, you have a number of options – either selling it through a coin dealer, at auction or on eBay.

Sell it at auction

If you’ve got a coin that you would like to sell at auction then you can contact a member of the British Numismatic Trade Association.

They usually deal in very old coins but they may be able to help you assess whether it’s worth selling your coin at auction or whether it would be valuable to collector.

Sell it on eBay

If you want to sell the coin you’ve found in your spare change on eBay then you need to know the risks.

Remember to set a minimum price that is higher or at the very least equal to the face value of the coin.

Even if your coin “sells” on eBay for a high price there’s no guarantee that the buyer will cough out.

It its terms and conditions, the auction website states that bidders enter a “legally binding contract to purchase an item”, but there’s no way to enforce this rule in reality.

The most eBay can do is add a note to their account acout the unpaid item or remove their ability to bid and buy.

This is because in order to sign up to the website users do not need to put in valid bank or PayPal details before making a bid.

If a bidder refuses to pay, then the only option for sellers is to give “second chance offers” to other bidders or relist the item.

For items of a high value eBay recommends that sellers put a limit on their listing to approve bidders.

It means bidders must email you before placing a bid but NOT that they must pay out the cash if they win.