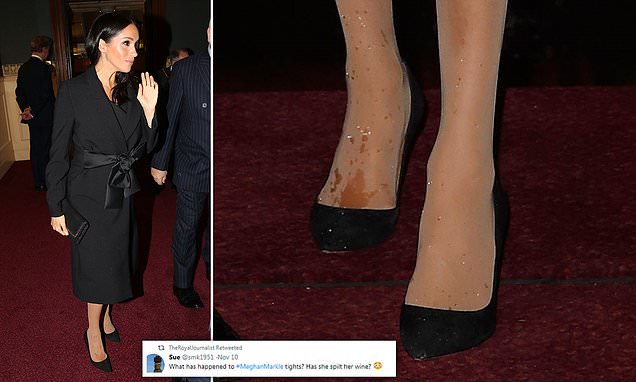 ‘What has Meghan spilled on her tights?’: Royal fans speculate over mysterious stains on the Duchess’ foot – as she’s criticised AGAIN for her choice of hosiery

The Duchess of Sussex has divided royal fans who were left confused by the tights she wore to the Festival of Remembrance over the weekend.

While the pregnant royal, 37, looked stunning in a belted Stella McCartney coat, some were not impressed by her nude tights, declaring them far too shiny.

Others were confused by a mysterious splatter on the hosiery, visible on her right foot and up the lower part of her leg.

‘What has Meghan Markle spilled on her tights,’ one asked, while another said it looked like she’d painted them with clear nail polish to stop laddering.

However, others pointed out that her tights had clearly got wet in the rain and the glare of the flahbulbs left the resulting watermarks more obvious.

The Duchess of Sussex, 37, paired her Stella McCartney coat with nude tights for the Festival of Remembrance in London at the weekend, but her hosiery left some royal fans confused 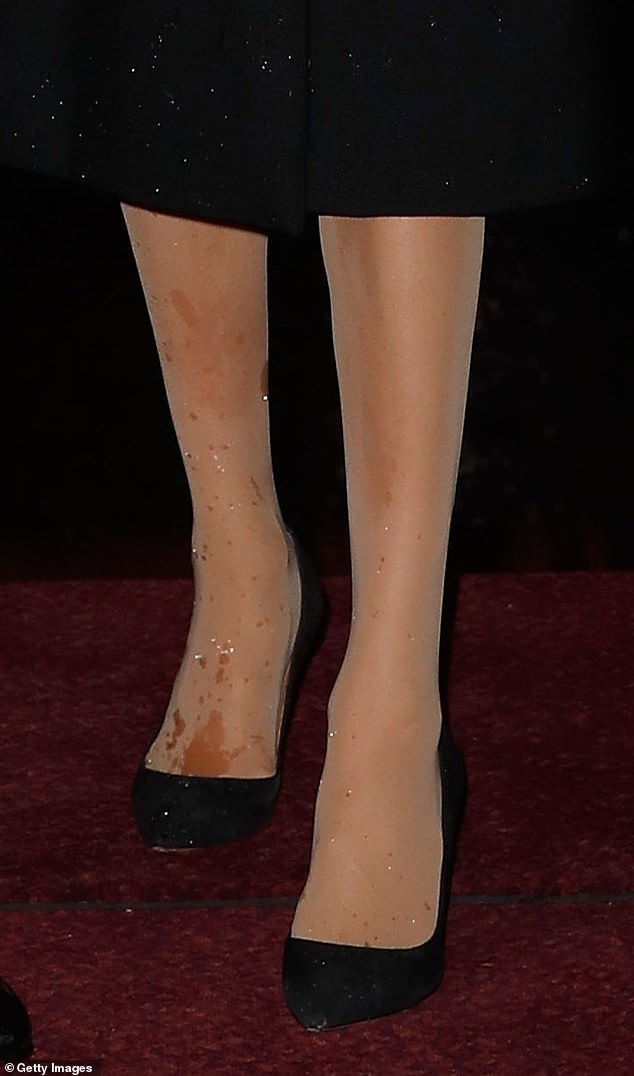 Eagle-eyed royal watchers spotted a mysterious watermark on Meghan’s right foot and splatters on the legs, but many pointed out that she had just been caught in the rain

On her first official engagement as the Duchess of Sussex, just days after her wedding, she was criticised for wearing tights that were far too pale for her skin tone.

This time round, others seemed to feel the hosiery was too shiny with one saying: ‘I cannot get over the flare of these tights.’

Another simply wrote ‘Meghan’s tights’ with a woman clapping a hand over her face emoji, while another asked: ‘Why do they keep making Meghan wear those tights?’

However, others were quick to defend the Duchess with one commenting that nude tights can look outdated on anyone, adding that finding the right shade for her skin tone may be difficult.

Brands such as Pendeza, Own Brown and Bianca Miller, set up by a former Apprentice candidate, specialise in tights for darker skin tones.

However, ‘natural’ tights from many high street brands are firmly aimed at white women and don’t come in a wide range of shades.

Others were quick to defend Meghan pointing out that it was just a bit of rain on her tights, and adding that it’s likely a challenge for her to find the right shade for her skin tone due to lack of options on the high street

When she attended a garden party at Buckingham Palace in May, days after her wedding royal watchers on Twitter argued that her sheer hosiery did not match Meghan’s skin colour with one saying her tights looked ‘dreadful’.

‘If you could find both Meghan and I tights in the correct shade, that would end a 30 year search for me,’ one said. ‘Or perhaps implore a designer to remember us biracial ladies’.

‘Why can’t her stylist actually find the right skin colour tights for her? Those tights are pale for her,’ another added.

Royal fans complained that Meghan’s nude tights did not match her skin tone, and called for manufacturers to offer more choice after she wore flesh coloured hosiery to a garden party at Buckingham Palace days after her wedding to Prince Harry in May