Dusty – real name David Kirkpatrick – was Australia’s most prolific recording artist, with more gold and platinum albums than any fellow countryman or woman, and has his own superbly maintained museum outside Kempsey, near his birthplace.

Dawson – born Herbert Brown – is remembered as “Australia’s singing cowboy” and the “ranch” he built (once one of Sydney’s most popular tourist attractions) no longer exists, destroyed by bushfire in 1979. 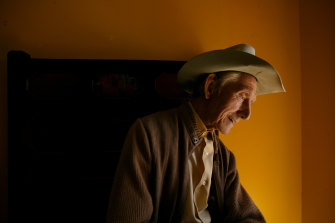 Smokey Dawson in 2005 when he was given an ARIA lifetime achievement award for services to the music industry. Credit:Steven Siewert

On the other hand – says Glenn T, multi-media performer, filmmaker and author of the 2015 play An Audience with Smoky and Herb – if you were going to have a meat cleaver thrown at you, you’d choose Smoky over Slim any day.

“Smoky was both a rodeo and a radio star,” explains Glenn T (a childhood nickname he continues to use professionally).

“As far as I can tell, Smoky was the first Australian to be invited to play at Nashville’s legendary Grand Ole Opry. That was in 1951 when he recorded two albums in Nashville. 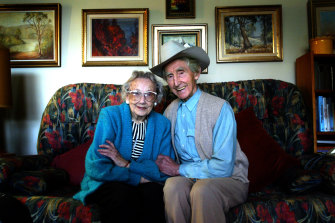 Smokey and Dot at their Lane Cove home in 2003.Credit:Jacky Ghossein

Glenn T – an unlikely friend of a man old enough to be his grandfather (“I have one of his meat cleavers on my wall and about 50 of his whips. Smoky wanted me to throw them out, but I couldn’t.”) – has updated Smoky’s 1985 autobiography, written when the entertainer was already 74.

The new version, with added photographs from the Dawson family collection and an added chapter covering Smoky’s final years (he died in 2008, aged 94), will raise money for two of his favourite causes.

Dusty and Dawson (both recipients of AO and MBE medals) had much in common, Glenn T says – not least strong wives who shaped their careers: country singer and songwriter Joy McKean in Slim’s case and Smoky’s beloved “Dot”, a radio star herself.

“Smoky and Slim had a professional rivalry, but not a personal one. Slim signed a record contract early, and he and Joy did their regular organised tours of Australia in their tiny caravan.

“Smoky never signed a record contract because he wanted to control what he did and performed in circuses, rodeos and country shows as well as recording.

“They were as different as their hats. Smoky always wore a Stetson, while Slim wore his Akubra.”

Dawson’s big break came in 1951 when the former Snowy Mountains drover narrated a documentary about Australian “rough riders” shown on US TV.

In it, he sang a self-written song praising Australian stockmen, adding “Rodeos and rough riders are just as much part of our national heritage as symphonies and seascapes.”

Consequently, he and Dot were invited to the US, with Dawson billed as the Australian equivalent of Roy Rogers, the “singing cowboy” whose adventures with horse Trigger featured on radio and film.

Unlikely though it seems, Dawson also played Petruchio in a New Jersey production of the musical Kiss Me, Kate.

“Smoky was also offered a role in Paint Your Wagon, starring opposite Burl Ives,” Glenn T says. “But at the same time he got a phone call telling him Kellogg’s (the cereal company) wanted him to star in an Australian radio series based on The Roy Rogers Show.

The Adventures of Smoky Dawson ran for 10 years, with more than a million Australian children (including Paul Keating and Jack Thompson) signing up as Smoky’s “deputy sheriffs”.

But there was a problem. “Until 1953, Flash – Smoky’s horse – was just a radio character. Smoky was brilliant at sound effects. He could replicate a horse’s gallop by tapping his fingers on a coaster.”

But Dawson’s popularity led to personal appearances. “That’s when Flash became real. Smoky bought a beautiful palomino. Roy Rogers had numerous Triggers, but Smoky only ever had one Flash, who lived until he was 31.”

Glenn T accompanied Dawson to his last appearance at Tamworth in 2007, when he and Joy McKean were inducted into the Galaxy of Stars walkway.

Quite an accomplishment for a man who grew up in an orphanage after being regularly beaten by his alcoholic father, left school at 13 and changed his name from Brown to Dawson to reinvent himself.

Smoky Dawson – A Life is out now.