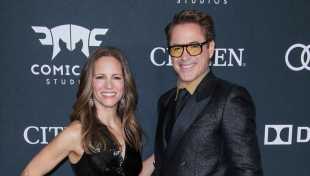 The Marvel Cinematic Universe is not only responsible for Robert Downey Jr.’s comeback — so is his wife, Susan Downey, who helped keep him ‘on the straight and narrow path.’

It’s hard to imagine Robert Downey Jr., 54, as anyone but the beloved Iron Man and one of the MCU universe’s most prolific stars, an image that his wife Susan Downey, 45, helped cultivate. “Susan is an incredible producer but an even better wife. She has definitely kept Robert on the straight and narrow path for years and has helped build his career to where it currently is at as he deals with a lifetime of recovery,” a source close to the couple EXCLUSIVELY tells HollywoodLife. Robert’s past drug addiction and arrests is far behind him now, largely thanks to his wife of nearly 14 years.

“With her help, Robert has been able to get to this point in his career and forever be known as Iron Man,” our source explains. Now, Susan is celebrating right alongside Robert as Avengers: Endgame beat out Star Wars: The Force Awakens with an opening day record valued between $140 million to $150 million. “[Robert] has only an amazing future in Hollywood with her and she is beyond proud of him and feels this weekend is the culmination of all his hard work,” our source says of the record-breaking weekend.

Almost two decades prior to this successful weekend, Robert was arrested on drug and weapon charges in 1996. Police had found an unloaded .357 Magnum and “small amounts of heroin and cocaine in his car,” according to The New York Times. More probation violations led to a sentencing of three years in prison in 1999, but the actor was released on parole after a one-year stint in the California Substance Abuse Treatment Facility and State Prison. He was hit with two more arrests in 2000 and 2001, which led to seeking treatment at the court-ordered drug-treatment facility, Wavelengths International. He has been sober since 2003, and went on to star in his career game changer — Iron Man — in 2008.

Susan and Robert met on the 2003 set of Gothika, a film that Susan was producing and Robert was starring in. They have since welcomed two children: son Exton, 7, and a daughter, Avri, 4. Robert also shares a 25-year-old son, Indio, with his ex-wife Deborah Falconer, 53.