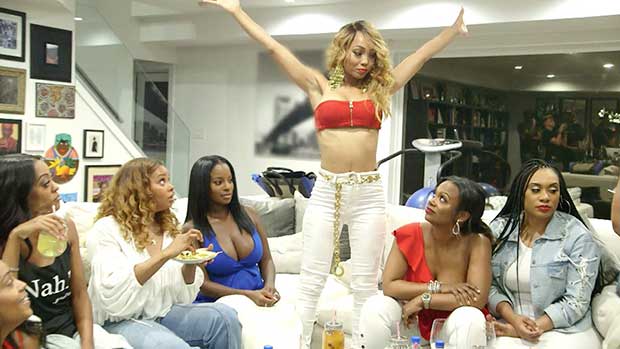 One lady was deemed a liar, another got called out for her terrible fashion, and another revealed she once had an open marriage during a game of ‘Pass The Peach’ on the Nov. 25 episode of ‘RHOA’.

It must have been a cloudy day when the Real Housewives of Atlanta filmed the Nov. 25 episode of the series because a lot of shade was thrown when the ladies played a game of “Pass The Beach” at Cynthia’s “Bailey-Cue”. Cynthia hosted a BBQ at her house and invited all the ladies — they were even allowed to bring a plus one, as long as they brought some food — so the event quickly became interesting. And by interesting, we mean dramatic. We must note though that before Eva showed up, Cynthia told NeNe and Co. that she heard Eva was telling people she paid Will to date her. Anyway, after everyone arrived, Cynthia suggested they all play this game of hers, during which you pull a question out of a bowl and if you don’t want to answer it, you pass the peach to someone else who should. It seems more complicated than it was, but essentially, it led to a few ladies spilling some major tea about themselves and each other.

For example, Marlo Hampton was asked who she thought was a liar, and she said Porsha used to be, but now the only liar in the group that she knows is Eva. Eva was offended, but didn’t get too upset over it. (Watch that interaction in the video below.) Later, Eva was asked who was dressed the worst and she said it was newbie Shamari. And speaking of Shamari, she told the group that she once had an open marriage with her husband, and during that time, she had relations with two different women. Finally, when Kandi was asked who she thought was the freakiest of everyone, she named Porsha. And then she put Porsha on blast for having anal sex. Fortunately, they all seemed to get a laugh out of it, but so much shade was thrown in the midst of all the giggling.

Before the BBQ, Porsha and Dennis took their relationship to the next level by having dinner with his mom. And almost immediately upon meeting, she grilled them about whether or not they were getting married anytime soon and how they felt about prenuptial agreements. It was super awkward, but Porsha and Dennis survived. As for whether or not they’re getting married anytime soon, they kind of dodged that question.

Also, Kandi and Todd met with Dr. Jackie to see what sort of surrogacy options they have for fertilizing the two embryos they have. They want to try to fertilize both, but only time will tell if that actually happens. They were quite shocked to disover that surrogacy could cost between $90K-$135K. Yikes!