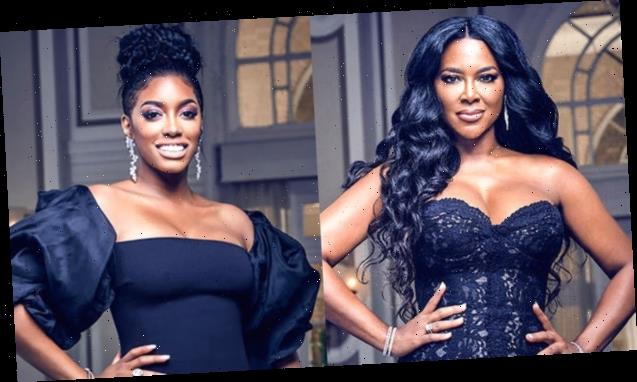 The entire cast of ‘RHOA’ was caught of guard during the March 7 episode of ‘RHOA’, when they discovered that someone had leaked info about Cynthia’s bachelorette party to the press.

Well, it looks like what happens in the dungeon doesn’t always stay in the dungeon. The cast of The Real Housewives of Atlanta learned that the hard way during the March 7 episode, when they realized that someone had leaked sensitive information about Cynthia Bailey‘s bachelorette party to Page Six.

While Cynthia and her sister, Malorie, were on their way to fetch a wedding dress for their mother, they came across an article with the following headline: Two ‘RHOA’ stars allegedly had sex with stripper at Cynthia Bailey’s bachelorette. Cynthia immediately told Malorie that she didn’t have sex with the stripper named Bolo, but the same couldn’t be said for her co-stars. As for who leaked the story — well, Cynthia wouldn’t say, but she did know who was the most “pressed” about what went on the night of her bachelorette party. So does that mean Kenya Moore — who was previously trying to figure out who had sex with the stripper — was the one who leaked the story? Porsha Williams definitely thought so.

Then, in a private confessional, Porsha added, “It seems like a Kenya leak. It seems like a low-down, ‘ehh this bitch’ type of leak. You might as well put it right there [at the top of the article] — written by Kenya Moore.”

Drew Sidora also agreed with Porsha and said she didn’t like how Kenya was conducting an “investigation” to try to find out who allegedly had sex with the stripper, but Marlo Hampton suggested that Porsha talk to Kenya and try to hash things out. Porsha, however, said she didn’t want to. “I don’t f*** with” her, she said.

Porsha also said that the “timing” of when Kenya decided to forgive Marlo for everything she had ever done to her was “suspicious”. Porsha insinuated at the move was a calculated attempt to get people on her side amidst the leak of “strippergate”.

In other RHOA news, Cynthia started bugging out this week after learning that she had hit major setbacks leading up to her wedding day. Not only did her mom’s dress get lost in the mail, but she learned that a hurricane was heading towards Atlanta. Oh and a few wedding party people dropped out of her and Mike Hill‘s big day, but if we’re being honest, Cynthia kept her cool throughout most of it. This time around, she doesn’t seem to be a bridezilla, but she did surprise her friends when she said she hadn’t asked Mike to sign a prenup yet. Instead, she said they’d do a post-nuptial agreement.

Who do you think leaked the story to Page Six? New episodes of The Real Housewives of Atlanta air Sundays at 8pm on Bravo.