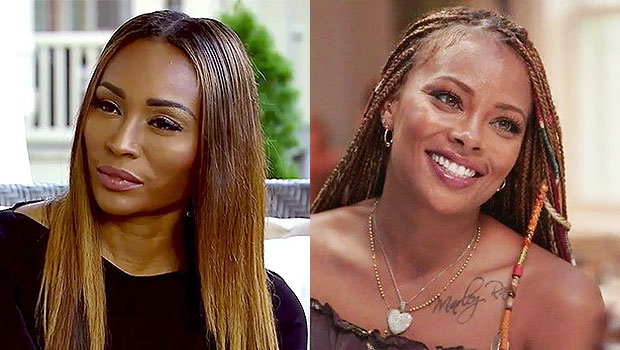 The drama is already brewing ahead of ‘The Real Housewives of Atlanta’ premiere on Nov. 4! And, Cynthia Bailey kept it real with us about what’s really going on between her and the newest cast member, Eva Marcille!

The Real Housewives of Atlanta are back! And, things are getting pretty chippy down in the ATL. Ahead of the season 11 premiere — November 4 on Bravo — there’s been major buzz about a rumbling feud between veteran cast member, Cynthia Bailey, 51, and the show’s newest housewife, Eva Marcille, 34. Both stars are models, so a foreshadowing feud got RHOA fans riled up. But, what’s the tea?

“What you can expect to see is a very different season and that’s what I’m excited about. Eva kind of changed the dynamic of the group to be honest,” Cynthia told HollywoodLife.com EXCLUSIVELY! “I don’t think people want to see us arguing about the same things and they want new conversation. And, this season is about new conversation, which was much needed.”

Despite the drama, Cynthia explains how when something serious goes down in the ATL, the true sisterhood of the housewives comes out. “Once we all found out about Gregg’s cancer, everyone kind of rallied around NeNe [Leakes],” she said. Gregg Leakes went public with his cancer news back in June, but has yet to reveal the what type of cancer he has. “That kind of set the tone for more of a sisterhood this season,” Cynthia admitted. She also noted that Gregg is “recovering very nicely,” and that NeNe has been his rock through it all.

However, that doesn’t mean there will be a shortage of drama this season. “It’s just a different kind of drama,” she revealed, adding, “Everyone’s in a pretty good place.” — “There’s a lot of fun, shady drama which I think is the best kind of drama, personally.”

As for her storyline? — “Mine is just going to be fun to watch. I’m an empty nester. My daughter leaves for college. Just when I empty my nest, I had another bird come in, my new boyfriend who I’m completely crazy about,” Cynthia gushed. “We’re together, we’re happy and we’re in love. My nest wasn’t empty for long. Things kind of took a huge turn for me.”

While there is a new fierce female joining the women in Atlanta, there’s a familiar face that will not be back for season 11 — Kenya Moore. The former Miss USA isn’t returning to the show after reported drama involving contract negations. And, she will certainly be missed, especially by Cynthia.

“Kenya is a good friend of mine. I do miss having her around this season, but you have to realize Kenya is close and I see her outside of filming anyways, so I still get to see Kenya, I just don’t get to see her on the show,” she said. “But guess what? Surprise, surprise, surprise — Kenya does make an appearance!”, Cynthia teased! Season 11 of The Real Housewives of Atlanta  premieres Sunday, November 4 at 8 PM ET/PT on Bravo.