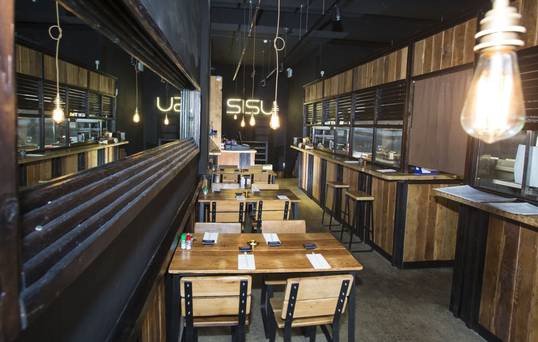 In Japan, ‘izakaya’ is the word used to describe a bar that serves a range of drinking snacks, but although Sisu Izakaya in Dublin city centre, which opened last year, has the look of downtown Tokyo about it, the food offering is a little more comprehensive than that.

The menu has everything from bento boxes to sushi to ramen and donburi, and there’s a touch of ‘fusion’ to some of the dishes.

Most importantly, though, I ate one of my favourite dishes of the year so far at Sisu Izakaya a couple of weeks ago. It was unadon, an abbreviation for unagi donburi.

As anyone familiar with episode 17 of Season Six of Friends (which first aired in February 2000) will remember, unagi is not, as Ross claims, a state of total awareness essential to self-defence, attained after years of studying karate. Rather, it is a Japanese freshwater eel.

At Sisu Izakaya, the unadon is a thing of beauty. It is also, at €20.50, one of the most expensive dishes on the menu, but it is what I will order the next time I eat there, and probably every time after that.

What is this unadon of which I speak? Essentially, a large bowl of steamed white rice topped with fillets of eel glazed with a sweetened soy sauce and grilled to the point of caramelisation in a style known as kabayaki, not a million miles away from teriyaki. The dish is finished with fine slices of scallion, and that’s it. The combination is wondrous and I urge you to try it.

Anyway, I’m getting ahead of myself.

I should really have begun this review with an apology to our smiling waitress. She deserves a special shout-out for putting up with my grumpiness and indecision when four of us stopped by for Wednesday lunch a couple of weeks ago. We sent the poor woman away at least three times before finally making up our minds about what to order. There’s no excuse, other than that the menu is long and some of the items on it perplexing.

I’ve come to the conclusion that I’m a sushi purist. In my defence, what would you make of a sushi roll containing crispy prawn, cheddar cheese, avocado, tobiko (flying fish roe) and teriyaki sauce? (I can’t tell you, because we couldn’t bring ourselves to order it.)

But enough of what we didn’t have.

We did order ebi (prawn) tempura, in an impeccable, light batter with a tentsuyu (dashi, mirin and soy) dip, and tender ‘seven spices’ calamari, presented on an unnecessary bed of limp leaves that brought nothing to the party.

Next, some pleasant but rather bland yasai gyoza – vegetable dumplings with a rice wine and soy-based dipping sauce flavoured with ginger and garlic, and – the unexpected star of the starters – agedashi tofu: deep-fried tofu (I know), delightfully crisp, with grated radish, scallions and big flakes of bonito (dried tuna) served in a bowl of dashi broth with a note of sweetness.

(I never expected to see four members of my family fighting over the last bit of bean curd, but there’s a first time for everything).

Tuna tataki – seared on the outside, and then finely sliced – was disappointingly dull, its ponzu sauce over-sweet.

An ebi tempura and avocado roll was simple and fresh, but a spicy tuna roll rather strange, with too much sweetness again in the chopped, almost jammy, tuna piled on top of the roll.

I was disappointed to see no sourcing or provenance information on either the menu or the website, and didn’t order any chicken or pork dishes because of this.

It’s time for the food service industry to be open and transparent about where the key ingredients in the food that customers are being offered comes from.

The bill for lunch for four, with sparkling water and one soft drink, and a portion of kimchi that was rather good, came to €101.90 before service.

I’d go back in a heartbeat for the unadon and the agedashi tofu; next time I’ll have some sake to accompany it.

The lunchtime bento box costs €10 and comes as a vegetarian option as well.

Two people sharing a selection of sushi followed by a wagyu sirloin steak each would run up a bill of €102, and that’s before wine, sake or service.

The unadon. If you think that eel is not for you, think again.