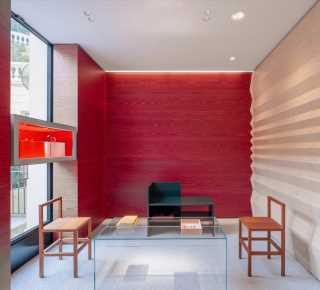 PARIS — Repossi has finished its second major store revamp in Monaco, unveiling an uncluttered space outfitted in raw wood that plays with geometry and color — offering a different flavor of modernity than the label’s futuristic Place Vendôme flagship known for shiny, metallic surfaces.

“The original idea was a space that was warm and welcoming but on the darker side,” said Flavin Judd, noting they experimented with striated walls and unusual colors.  “Each room has its own context and purpose,” he added.

Repossi, who noted the pair share an interest in a certain modern aesthetic, said the project came together “very naturally.” She has known Judd for several years, and has purchased furniture from the foundation which sells minimalist, boxy-shaped chairs, tables and desks designed by his father Donald Judd in the Seventies, Eighties and Nineties.

Clients of the jewelry house, which belongs to LVMH Louis Vuitton Moët Hennessy, will relate to the store’s concept, which offers an elevated experience, suggested Repossi. She observed that some would know Donald Judd’s work as collectors of his art — rather than the furniture, as in her case.

First Ladies Fashion Through The Years

“I fell in love with the wood,” she said, noting an appreciation for the functionality of the objects “as a way of living, rather than an art work, which is more democratic in a way.” She added: “It has a timeless aesthetic that will never age — at least not for a while. So that’s really a value that I relate to.”

The Monaco store was the label’s first, established on the Monte Carlo promenade in 1978 by her father, creative director at the time.

“Everything sort of becomes a tribute,” remarked Repossi, discussing how she and Judd have both carried on their father’s legacies. “When you carry such a thing, you have to carry it with respect,” she added.

Repossi, who has been creative director since 2007, cites Richard Serra and Cy Twombly as influences on her work, as well as the Brutalist movement. She is known for her multiband Berbère rings, which take inspiration from the tattoos of Tuareg nomads in North Africa, as well as ear cuffs and exploration with asymmetry.

The label is releasing its new collection of Berbère Chromatic rings, which come in wide bands of pink gold and lacquer — in a nude pink, red and a dark navy.