Many single women dread being asked about their love life at a family get-together or social event, even if they’re perfectly happy without a partner.

This is because many of the phrases and questions they are asked subtly imply there is something wrong with being alone, an expert has explained.

Speaking to FEMAIL Hayley Quinn, the UK-based dating expert at Match.com, told how even seemingly innocuous, well-intended phrases and questions can leave single women feeling frustrated, angry or a little put out.

Phrases including ‘have you met someone yet’ and ‘there must be queues of people wanting to date you’ can lead to a feeling of being ‘single-shamed’ because they indicate that listener should be trying their best to get into a relationship.

Here, Hayley reveals the five commonly spoken phrases and questions that are best avoided when speaking a single friend or family member about their love life – and the steps you can take to avoid causing offence. 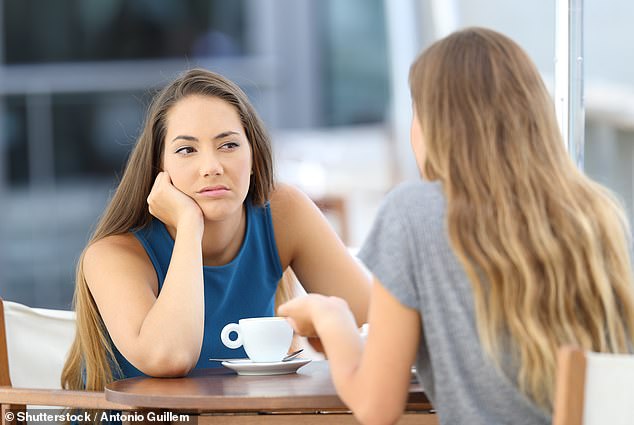 Many single women dread being asked about their love life at a family get-together or social event, even if they’re perfectly happy without a partner. Stock image

‘So have you met someone yet?’

The key word here is ‘yet’. It implies that if you haven’t already got your skates on to find a partner, you really need to hurry up. It also suggests there’s no optionality around whether you want a relationship, or not.

The reality is that whilst many people will want to find a partner, there are also more content singles out there than you might think.

Recent research from Match has shown that 59 per cent of singles interviewed were happy with their lives as they are, and whilst 61 per cent would like to find someone, they are not going to rush into a relationship with the wrong person.

If so many people are happy with their own company, then why do we feel the need to constantly question that?

There’s certainly more than one way you can be happy, and our lives don’t all revolve around relationships.

‘There must be queues of people wanting to date you’

Whilst we all might like a bit of flattery, flattering someone about how many admirers they must have may also strike the wrong tone.

Plenty of people are happy being single, however others may be actively looking without any success yet.

If this is the case, then the idea that there’s ‘plenty more fish in the sea’, when they’ve been trying really hard to find one, may hit a sore spot.

Instead of taking comments like these as a compliment, it may make someone feel even more like they’re lacking something, ‘but I’ve tried everything!’.

Remember, even if you can see why someone is a catch, they may not always be feeling that way about themselves.

If they’re really looking for a partner, and are having a hard time dating, comments like these may draw uncomfortable attention to what they don’t feel like they have.

‘I know just the person to set you up with’

Like so many single-shaming statements, what’s tough about this one is that it is laden with assumptions.

It assumes that the person you’re speaking to must be unhappily single, in need of help, and ready to take whoever’s being offered to them.

Of course, when most people play matchmaker, it comes from a good place. They want to help. Before you start thinking of potential matches though, make sure you check in that this is actually something someone wants.

There are few things worse than being arm twisted into a date that you’re not in the right frame of mind to go on, only to spend a couple of torturous hours in a bar with someone you’re not attracted to at all.

If you want to help a friend out, try throwing a party instead, invite a great mix of people single and coupled up, and if people make new connections great, if not it’s not all on you.

‘Are you seeing anyone special?’

When most people ask this question, they’re probably just trying to find the right way to ask about your love life.

However, there are a couple of big problems with asking this question to a single person.

First of all, most single people will have plenty of ‘special’ people in their lives. Being single isn’t a barren wasteland of social contact.

In fact, singles will often have strong platonic relationships that they really value.

Unfortunately though, having a best friend to laugh with, just doesn’t quite have the same wow factor as a romantic partner.

In prioritising asking about someone’s romantic relationships, you may forget that they have plenty of other connections in their lives that are valuable to them.

Secondly, there’s a slight implication here that more casual relationships don’t cut the mustard either, this question is essentially asking, ‘so is there anyone in the running to be The One?’.

‘Why do you think you’re still single?’

You don’t want to ask someone to self-diagnose why they’re cursed with the disease of being single.

Again, this single-shaming question implies that the only way we can be ‘right’ is to be in a relationship, and if we’re not there’s a problem to fix here!

Rather than seeing being in a relationship as the natural end destination for everyone, it’s high time we gave people the opportunity to be individuals and choose their own destiny.

Another reason why this question can feel crazy frustrating is that even if someone is looking for a partner, there may be no real reason why someone’s single.

Being single doesn’t mean you’ve got something wrong with you, or something you’re not doing right. We are all on our own paths in life, plus luck and timing play a role in finding love.

So when you’re next speaking to a single friend, by all means check in on them, but don’t assume they’d want to change a thing about their single status.