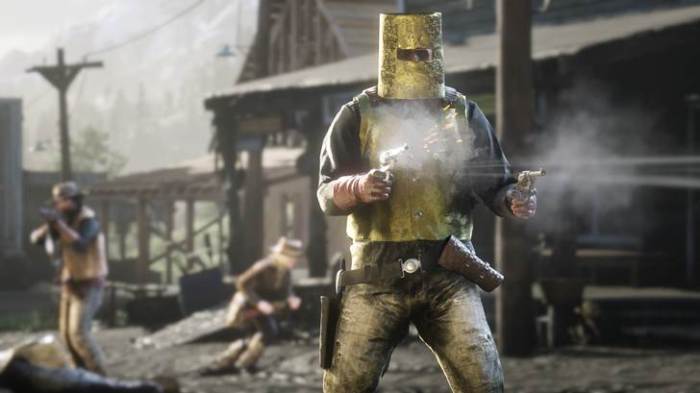 On Feb. 26, the beta will be adding new Free Roam events, Showdown Modes, and races as part of its first official title update. Along with this content, Rockstar is adding new weapons, clothing, and emotes for your character in addition to balancing changes, improvements, and other enhancements.

In terms of gameplay modes, players will be able to jump into the Fool’s Gold Free Roam event, where outlaws compete to control a suit of Golden Armor. Those who emerge victorious from various tussles and eliminate those wearing the armor will earn points and put it on themselves, then earn points for kills earned while donning it.

Competitive Challenges freshen things up with Fishing Challenges. They’re sorted by type, and when you choose which one you’d like to complete, you’ll be outfitted with everything you need to compete, including a rod, lures, baits, and other equipment. All you need to do is head out to a lake of water to start fishing. You’ll be kept safe from any wandering enemies who happen to take shots at you while you’re competing, as well. The highest weight total of fish wins the contest.

Showdown Modes will also be coming to the game, where players compete in teams to capture and deliver bags, steal loot from other players, and survive as long as possible. Up in Smoke, Spoils of War, and Plunder will be getting additional details further down the line.

A new race variant in the form of Target Races will be available in the near future as well, where players shoot targets while riding on horseback during a race to the finish. PlayStation 4 players will get early access to Open Target Races, as well as the Jawbone Knife melee weapon as well.

New weapons, including the Evans Repeater rifle and Rare Shotgun will be up for grabs via the Wheeler & Rawson Catalogue and gunsmiths. There’s a selection of new clothing like the Diamondback Hat and Rutledge Vest on the way as well. This new update does include Emotes, too, with greets, reactions, and taunts on their way.

For now, players can enjoy the “Red Dead Online” beta all week to earn 20 percent more XP on various activities ahead of Feb. 26. There will be additional announcements to come in terms of content for the still-in-progress multiplayer mode.