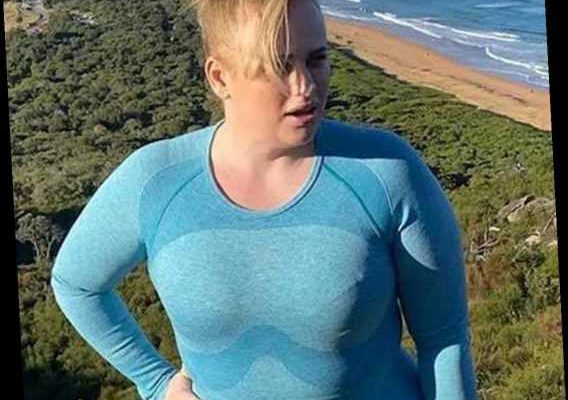 From tackling emotional eating to dating Jacob Busch, Rebel Wilson has filled her year with change and progress. Read on for E!'s exclusive interview with the Pitch Perfect alum.

It's been a year of love for Rebel Wilson—that is, self-love.

On Jan. 2, the Pitch Perfect alum revealed to fans  that she was embarking on what she had declared "the year of health." Now, in the 11th month—and amid an ongoing coronavirus pandemic—Wilson has stuck to her word and is steadily approaching her goals. In October, the star revealed she was "only 3kg's away" from her goal weight, which amounts to roughly 6.6 pounds. However, as the actress exclusively shared with E! News, the journey has been about more than a number on a scale.

"This year, I really kind of psychically knew I wasn't going to work that much and I was like this is going to be the year of health," Wilson—she has partnered with Uber Eats, Chipotle and Hinge for an epic cuffing season menu—said. "So, I'm going to take it easy for a bit and really focus."

In addition to hiring a nutritionist, setting a protein-heavy diet and exercising, the 40-year-old has also honed in on her eating habits. "For me, the big thing was looking at my emotional eating and why I was doing it, and working on the mental side, which for me comes down to self-love really," she explained. "It's so hard to teach someone about that…I don't think I've arrived at some final destination yet."

While loving yourself sounds innately simple, Wilson acknowledged it can be easier said than done.

When waves recently knocked her into rocks in Mexico, leaving her scraped and bruised, "I'm like, 'Oh, I'm just gonna eat the cupcake.' I'm slowly trying," the star said. "Even though, I'm such a confident person, I just wasn't treating myself with the same respect and love and kindness that I would probably treat other people with."

In the process of tacking her habits, she looked at how she would treat a child to help better her perspective: If she wouldn't feed them sugar and junk food all day, why would she do the same to herself? "Occasionally fine, but like to give them that every day is not loving and so, why do I do that to myself?" she told E!. "Why aren't I valuing myself the way I would value another person? It's not like you wake up overnight and go, 'Oh, now I love myself more.' It's a hard thing and you got to look at why you might have inherited those behaviors or total things that happened in your life."

Between overhauling her lifestyle and her budding romance with Jacob Busch, Wilson's 2020 has certainly been life-changing. Read on for more of what she had to say about her one-of-a-kind year:

Carrie Underwood's CMA Awards Wink Sparks Debate: Who Was It For?

On skinny vs. healthy:

"I don't want to project the message that being smaller is better because I don't really believe that. I was just engaging in pretty unhealthy habits, like eating a tub of ice cream every night and stuff, that wasn't actually helping me. It just felt good in the moment."

"I just really relate to anybody who is overweight…Whether you want to lose weight or you don't, that doesn't bother me. I just always like those people and I just feel so empathetic towards them because I've been there, and I don't know how my journey is gonna finish."

On her past and future health:

"I've been overweight for about 20 years. I started gaining weight when I was about 20. I had something called PCOS—polycystic ovarian syndrome—and I gained weight rapidly. It's just a hormone imbalance and you gain a lot of weight usually and that's how it manifested in me. Sometimes, I feel sad, but then at the same time, I worked my body to my advantage. I like being all sizes. It's just now turning 40, I am more health conscious and thinking of starting a family."

On the most rewarding part of her health journey:

"As you get older, you realize, oh god, I just don't want to get trashed and wake up and feel tired…I got more energy, and I'm sure like when I was doing Pitch Perfect, there are some nights I didn't go out with the other girls because I would probably be a bit more tired after dancing my as– off. And now, you just have better energy about you. I feel sad that I didn't learn this earlier, but also this was my journey."

On starting a relationship before her weight loss:

"Some people on social media say, 'Oh, well you lost weight and then you got a hot boyfriend.' But, what I do want to say to those people is that I actually dated Jacob when I was at my heaviest as well. So, it's not like I suddenly lost weight, and then you're like, oh, you get a hot boyfriend—that's not how it works. This guy liked me at 100 kilos and now 75 kilos. I just want to clear out that. There's something really comforting in that to me because you're like, oh, it wasn't necessarily of what my body type was. He really likes me for me."

On the quality she learned she needed in a partner:

"The one thing I realized in doing all the emotional work…what I actually needed is sweetness in somebody, instead of sweetness in like ice cream and brownies…If you're meeting someone over an app, you can't tell how sweet and genuine they are as a person. And you've agreed, you've actually got to just give it a go and flesh it out in real life, I think. But that, to me, that quality of sweetness is just something that I was really after and that's what Jacob brings to me."

On being with Busch as "cuffing season" approaches:

"Our plans are just to keep going and everything is so fun and nice. We will see! We're talking about a few getaways, but I don't know exactly. He is such a sweetheart and I adore him. We will see what happens."

On taking her heath one day at a time: "It definitely is a daily journey. You are never really finished with it. If I'm stressed or under so much pressure, I probably will always lean back on that emotional eating. So, you got to manage all that. I hope everybody out there tries to get a bit healthier and especially the pandemic, you want a good immune system and to be as healthy as you possibly can."

The Chipotle cuffing season menu is available exclusively on Uber Eats from Nov. 13 to Dec. 5.