Prosecutors lacked sufficient time and evidence to obtain an order under Indiana’s “red flag” law that would have prevented the gunman who killed eight people in a FedEx facility from purchasing firearms, a top prosecutor said Monday. The order would have forced Brandon Scott Hole to appear before a judge to determine if he should be allowed to possess firearms.

The FBI said Hole, 19, legally purchased two rifles used in the shooting rampage on April 15 — even though police seized a shotgun from his home last March after his mother said he might try to commit “suicide by cop.”

Ryan Mears, the top prosecutor for Marion County, said the occurrence wasn’t enough to pursue a warrant from a judge to prevent Hole from purchasing more weapons and said the law’s 14-day hold isn’t enough time to investigate potential risks.

“I’ve been very vocal about my feelings about this particular law, I think it’s a good start but it’s far from perfect, but I think there’s a lot of room for improvement and I hope others are open to that,” Mears said in a news conference Monday.

Police seized the shotgun on March 3, 2020, and Hole was evaluated by mental health professionals, according to Deputy Chief Craig McCartt of the Indianapolis Metropolitan Police Department. The case was sent to the Marion County Prosecutor’s office, where it stopped.

“For us, the risk if we move forward with that proceeding and we lose — guess what happens? That firearm goes back to that person,” Mears said. “I think people hear, ‘red flag’ and they think it’s the panacea to all these issues — it’s not.”

At least 19 states have “red flag” laws, which allow police or family members to petition a state court to temporarily remove a firearm from a person presenting a danger to others or themselves.

Indiana’s “red flag” law passed in 2005 and was nicknamed the “Jake Laird Law” after an officer who was fatally shot the year prior. The law allows police to seize weapons from someone they believe poses a risk to themselves or others. Within 14 days, a court holds a hearing to determine whether firearms should be retained.

John Feinblatt, the president of Everytown for Gun Safety, said an analysis from his group shows that “red flag” laws are “extremely effective at saving lives” but, like any law, “they are only effective if properly implemented.” 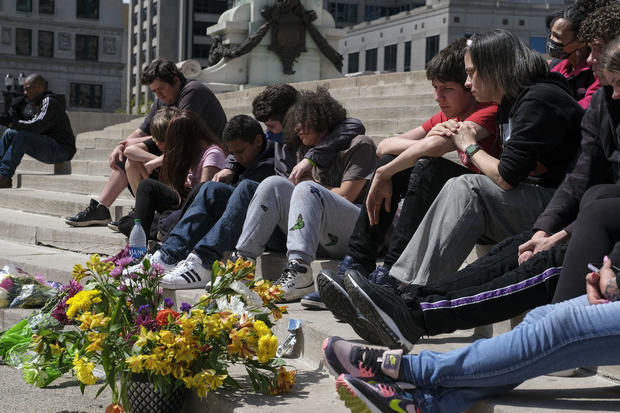 A spokesperson for Indianapolis Mayor Joe Hogsett said in a statement that his office is monitoring the investigation and “what breakdowns in the “red flag” law processes may have come into play.”

Hole’s family recently issued an apology to the victims’ families. “We are devastated at the loss of life caused as a result of Brandon’s actions; through the love of his family, we tried to get him the help he needed,” the statement said.

“Our sincerest and most heartfelt apologies go out to the victims of this senseless tragedy.  We are so sorry for the pain and hurt being felt by their families and the entire Indianapolis community.”

Karen Smith’s 19-year-old daughter, Karli, was among the eight victims killed. “She was just fun to be around. She just made everything happy… Made you smile,” Smith said. “She was the light of my life.”