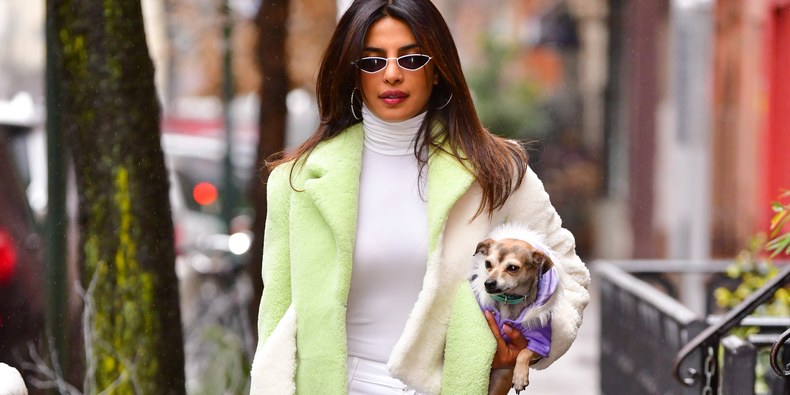 Perhaps you heard Priyanka Chopra has something of a busy month. She got married in a massive multi-day celebration to Nick Jonas in India, and then found time to attend her friend Isha Ambani's wedding alongside Beyoncé and Hillary Clinton as well. The newly minted Mr. and Mrs. Chopra-Jonas also chiseled out a bit of time for something of a "mini-moon", but had to postpone a full tilt honeymoon because, well, they were both just too busy.

As such, Chopra is now back on the streets of New York City and back to life as usual. Official promotion for her upcoming film Isn't It Romantic will begin soon enough, and she's attached to two more films as per IMDb. She also has more mundane duties to attend to as well, like walking her adopted dog Diana.

Chopra was spotted this morning wearing a mostly all white outfit with a furry jacket that included some pops of neon-green. Diana was clad into a contrasting purple doggy raincoat with a fuzzy collar (note: this does not appear to be the same doggy raincoat that Chopra included on her Amazon wedding registry, but we suppose the dogs of Bollywood royalty need several sartorial options for a rainy day).

Last night, Chopra was also spotted leaving her apartment building in a similar silhouette, but this time done in all-black. Diana wasn't present for this excursion, but likely because Chopra was headed somewhere not pet-friendly. We assume that if Diana had gone she would have had the perfect doggy raincoat to match.