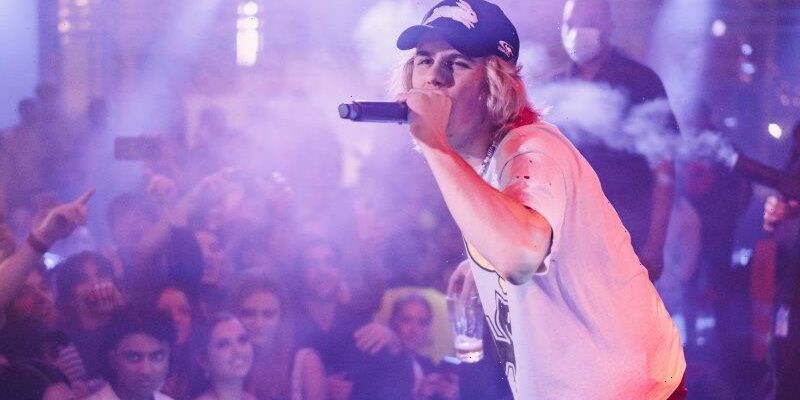 Last week saw a heartfelt reunion for Jeffrey and Mary Dunn when they were reunited with their grandson, Australian rap export The Kid Laroi.

After three-and-a-half years apart due to COVID-19, the proud Broken Hill couple weren’t about to miss seeing the music prodigy, born Charlton Howard, kick off his world tour and were proud guests at his second show on Friday night. 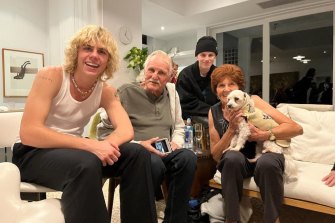 Jeffrey and Mary Dunn have been reunited with their grandsons The Kid Laroi and brother Austin Howard.Credit:

Emerald City understands the 18-year-old megastar from Sydney’s Waterloo chartered a Falcon 900 18-seater jet from Melbourne to collect the couple from the outback mining town and fly them to Sydney, with his mum Sloane in tow.

Laroi has spared no expense in making sure his grandparents are comfortable during their stay in the big smoke.

The couple are staying in a luxury home at Dover Heights with a chef and nurses on hand due to Jeffrey’s ill health.

It’s clear that fame and success hasn’t seen the hitmaker forget where he is from or who was by his side before chasing international success from his base in Los Angeles.

It’s rumoured Laroi and girlfriend Katarina Demetriades are staying at the Four Seasons hotel in The Rocks with the entire top floor of the hotel occupied by his tour team, security and several friends from his youth.

On Wednesday night the loved-up couple enjoyed a night to themselves at Crown’s $40,000-a-night Villa 88, where they had a romantic dinner surrounded by red rose petals. 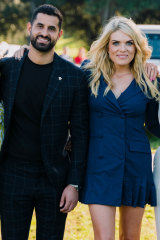 Ladies donning fuchsia and floral frocks turned out in droves for the Mercedes-Benz Sydney 2022 Women’s Luncheon last week. The annual event at Centennial Homestead is dedicated to inspiring, connecting and empowering women.

It was a ladies-who-lunch dress code as guests celebrated the achievements of 2022 Young Australian of the Year and founder of Street Side Medics Dr Daniel Nour.

Nour, the guest of honour and only male panelist, raised more than a few eyebrows when he posited that domestic violence doesn’t discriminate by gender and referencing actor Johnny Depp, who is locked in a defamation trial against former wife Amber Heard.

“Firstly, it’s something I feel passionately about; domestic violence, sexual violence, harassment is not gender-specific,” he told Emerald City when contacted for comment last week.

“In a room full of women, my focus is obviously on domestic violence against women, that was the reference that I was trying to make.”

Depp and Heard have accused one another of domestic violence in the $100 million defamation trial.

“I’m not a judge, I haven’t watched most of the proceedings. Point is, obviously, there’s many questions to be asked in the case but there could be domestic violence on both sides,” Dr Nour added. 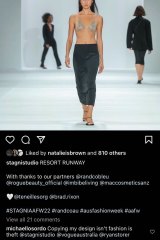 For as long as design has existed, creatives have had to fight hard to protect their intellectual property. In the social media age, fed up fashion designers are going straight to the public square and calling out copycats on Instagram.

The comment remained on the image for days but miraculously disappeared hours after Lo Sordo was contacted for comment.

“I pride myself on my unique designs and I understand we are in an industry that carries inspiration from each other, past and present,” he told Emerald City. “As they say, imitation is the greatest form of flattery.”

It seems the line between inspiration and imitation has become increasingly blurred. Earlier this month Nagnata co-founder and design powerhouse Laura May Gibbs called out Marcs over a merino wool jumper similar to the unique designs of Nagnata.

St Agni did not respond to Emerald City’s request for comment.