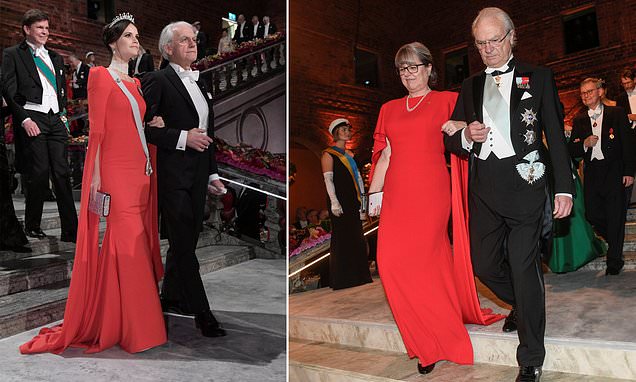 Ladies in red! Princess Sofia of Sweden inadvertently twins with a Nobel Prize winner at glitzy banquet in Stockholm

She’s one of the most stylish royals around, but it seems Princess Sofia of Sweden has finally met her match in a glamorous Nobel Laureate.

Both dresses were an eye-catching shade of red with a fitted waist, fishtail skirt and statement flowing sleeves.

Former model Sofia, who attended the lavish meal with her husband Prince Carl-Philip, paired her Zetterberg Couture gown with a pearl choker, broach, silver sash, and a sparkling tiara.

Linking King Carl Gustaf of Sweden’s arm, physics laureate Donna looked equally regal in her floor-length gown which was a little more sparse on the accessories. 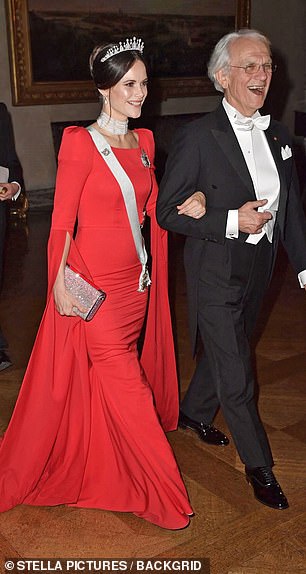 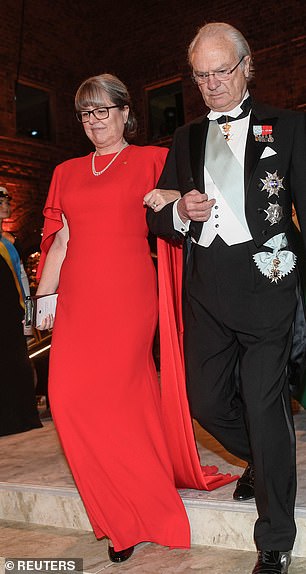 Twinning! Princess Sofía of Sweden (left) wore a dress almost identical to one worn by Physics Laureate Donna Strickland (right, with King Carl Gustaf of Sweden) at the Nobel Prize banquet which was held at Stockholm City Hall, Sweden on Monday evening

The event was also attended by her sister-in-law and Sweden’s future queen Victoria, 41, who looked every inch the fairytale princess in her pink and grey ballgown and similarly  spectacular tiara.

Accessorising with a matching pearl necklace and bracelet, she chose to complete the look with patent black heels and a clutch.

But physics laureate Donna Strickland had more important things on her mind than turning up in the same designer gown as the Princess of Sweden. 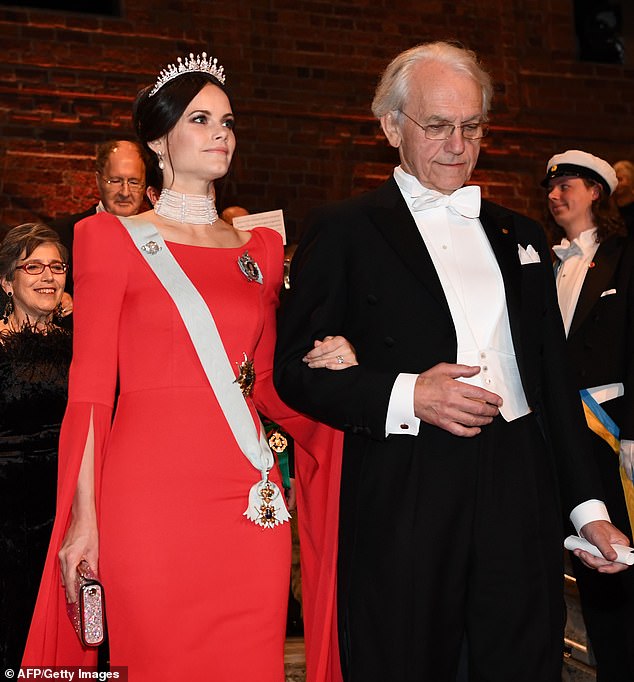 A vision in red: Princess Sofia of Sweden and French physicist Gerard Mourou arrive at the Nobel Prize banquet in Stockholm City Hall on Monday evening 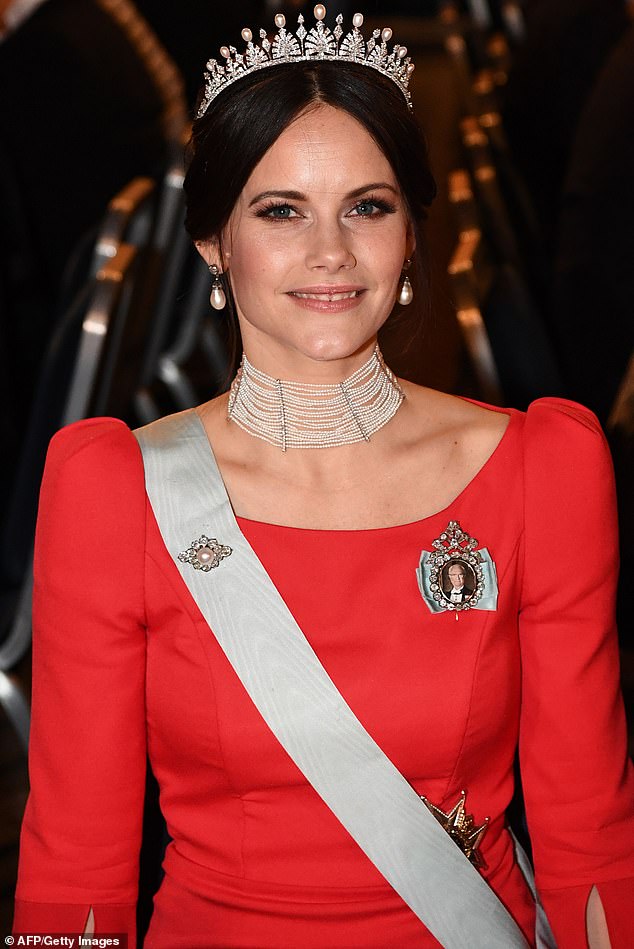 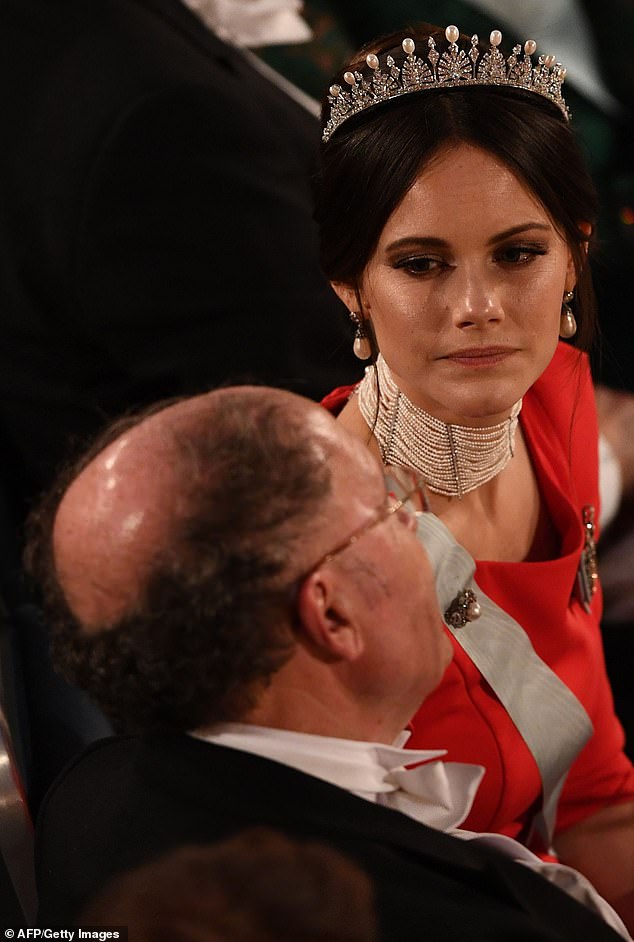 Princess Sofia of Sweden talks with British biochemist and co-laureate of the 2018 Nobel Prize in Chemistry, Gregory Winter, during the Nobel Prize banquet at Stockholm City Hall 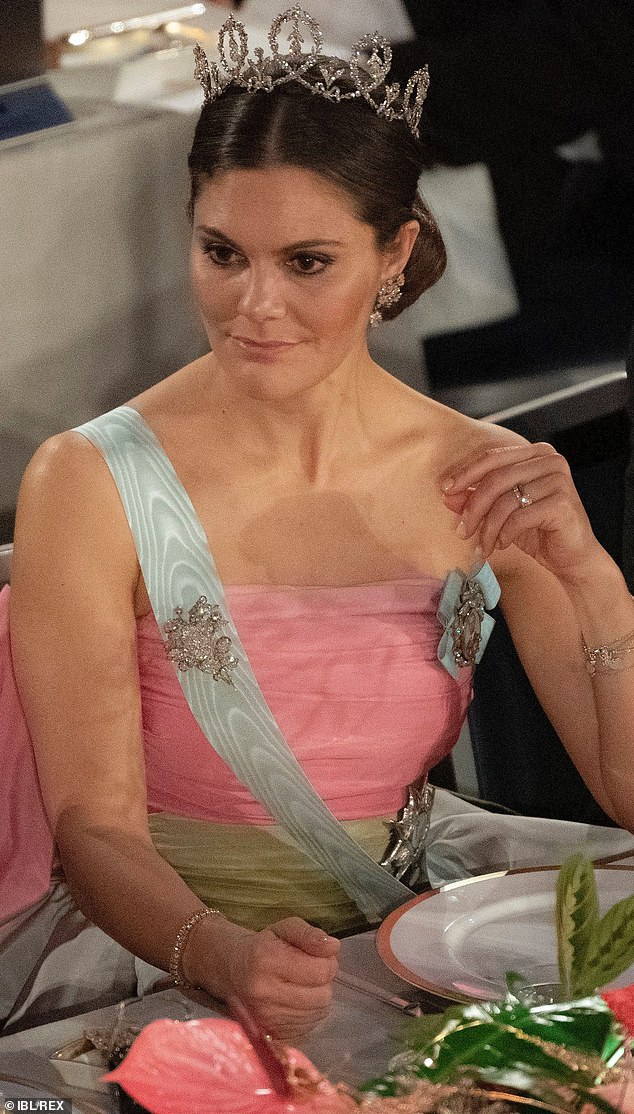 The future queen Victoria was seen joining in with the Swedish national anthem before attending the banquet at Stockholm City Hall, Sweden

The Canadian physicist learned she and two others had won one of science’s highest honours back in October.

Becoming one of just three women to win the Nobel Prize for Physics, proud supporters at her Ontario university cheered her on from across the globe yesterday.

It’s been over 55 years since a female physicist last one a Nobel prize.

Strickland joins the likes of Marie Curie, the first woman to claim the award in 1903, and Maria Goeppert-Mayer, who was recognised for her achievements in 1963. 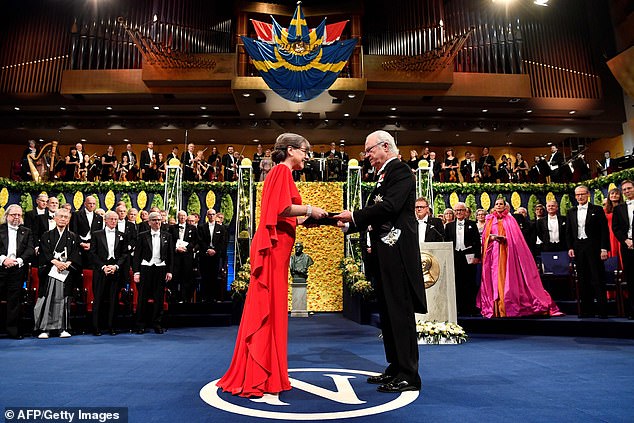 The award-winner was all smiles as she received her Nobel Prize from Sweden’s King Carl XVI Gustaf at the formal ceremony at the Concert Hall in Stockholm, Sweden 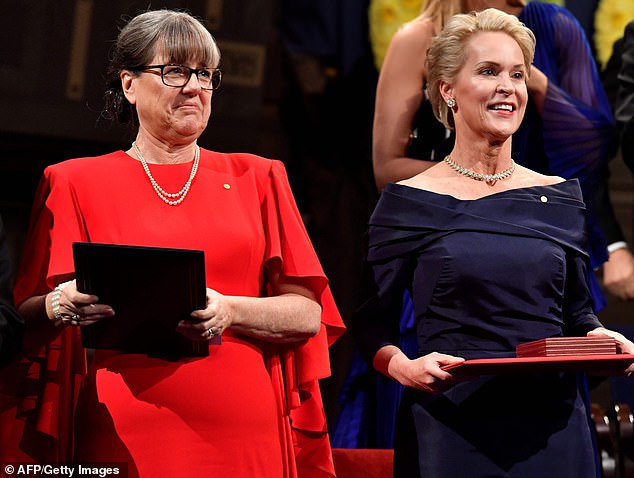 Canadian physicist Donna Strickland (L) and co-laureate of the 2018 Nobel Prize in Chemistry, US chemical engineer Frances Arnold, hold their Nobel Prizes at the Concert Hall in Stockholm, Sweden

The prize-winner was being acknowledged for being part of the team to invent Chirped Pulse Amplification, a technique that supports today’s short-pulse, high-intensity lasers and became the vital component to corrective eye surgery.

Her award-winning work was conducted in the early 1980s when she was finishing her PhD under French scientist Gerard Mourou’s close monitoring.

The other part of the prize went to American Arthur Ashkin, who was the third winner of the award.

The Nobel committee says Strickland and French scientist Gérard Mourou will each receive a quarter of the US$1.01 million prize for their joint work on laser physics.