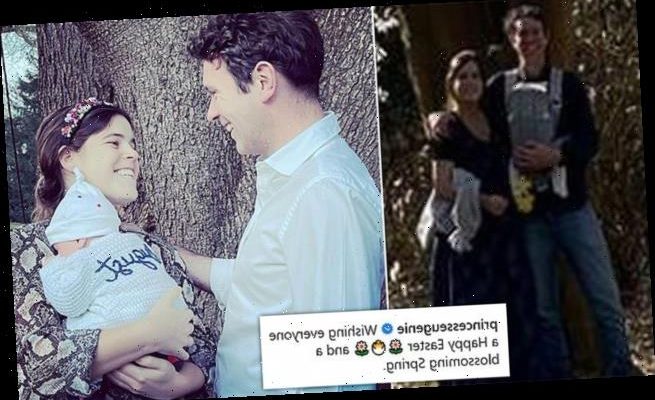 Princess Eugenie has shared a new picture of her son August to mark Easter.

The royal, 31, shared the picture on her Instagram page to mark the end of the Easter weekend at Frogmore Cottage, where the couple have been reportedly been living since the birth of their son.

The picture shows a beaming Eugenie next to her husband Jack Brooksbank, 34, who is holding their son August, born on February 9, in a baby carrier fastened around his chest.

In the perfect family picture, the couple are standing in front of a picturesque blossoming tree, capturing the beauty of the English countryside at Spring.

Royal fans swooned over the family snap and wished the couple a happy Easter. 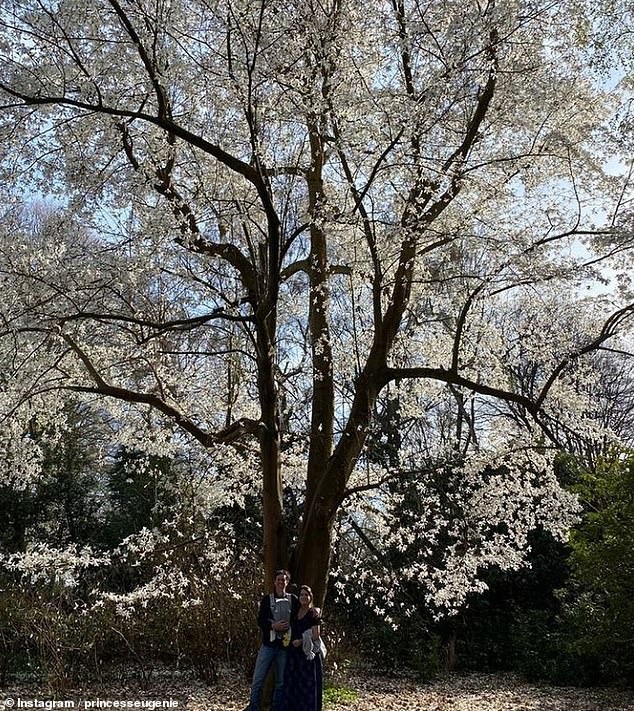 Princess Eugenie, 31, has shared a new family portrait of her with husband Jack Brooksbank, 34, and baby August, who was born on February 9, to mark Easter

‘Wishing everyone a Happy Easter and a blossoming Spring,’ Eugenie wrote in a caption accompanying the picture.

In the snap, new mum Eugenie is wearing a long dress with a sweetheart neckline, and a jumper rests on her arm.

Meanwhile,  Jack, who is holding Eugenie close, cuts a casual figure with a pair of jean trousers and a navy shirt.

The father-of-one beams as he holds a pair of daffodils in his hand, with his son resting against his chest in the  carrier. 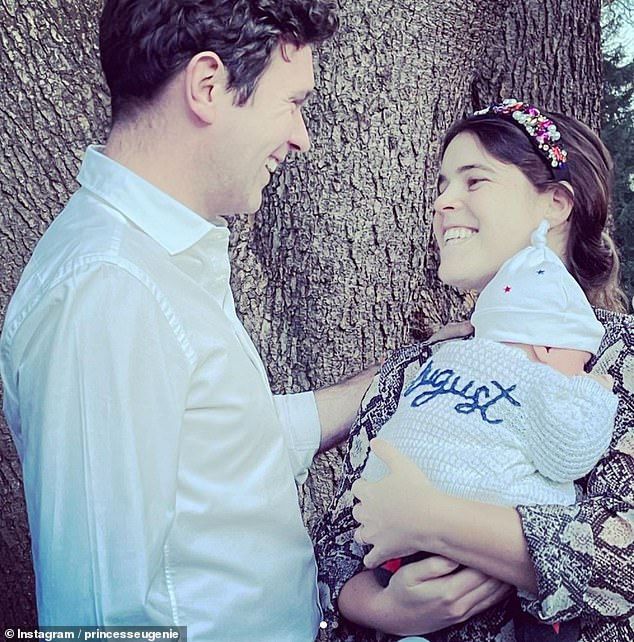 Eugenie has been letting royal fans into her family life with intimate pictures, including this photo she shared for her 31st birthday on March 23

August, whose face is hidden, can be seen wearing white pyjamas and a white hat.

Royal fans quickly swooned over the intimate snap, and sent their love to Eugenie and her family.

‘So much love to your family,’ one wrote.

The daughter of Prince Andrew and Sarah Ferguson welcomed her first child, who is 11th in line to the throne, with Jack on February 9 at London’s Portland Hospital.

The couple were pictured leaving the hospital three days later on February 12. 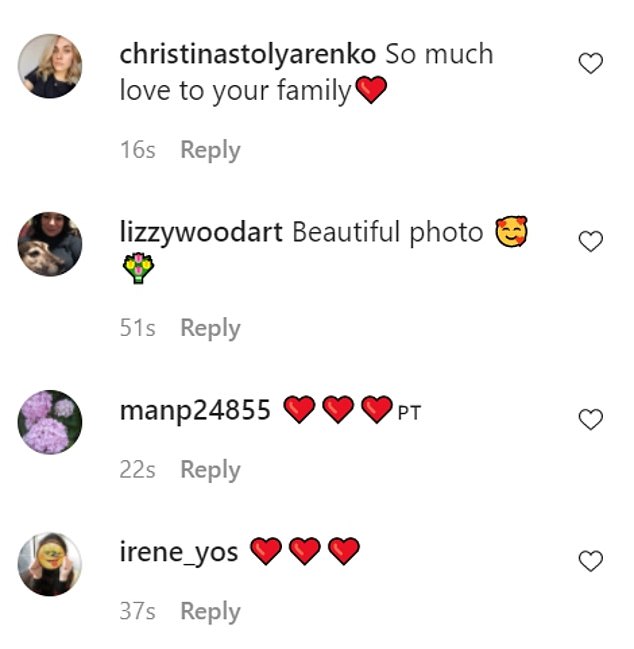 Last month, the new mother revealed the name and shared her first family picture with her son – the Queen’s ninth great grandchild – which is thought to have been taken in the grounds of Frogmore Cottage, where the couple are currently living.

Posting a series of photographs on Instagram, Princess Eugenie wrote: ‘Thank you for so many wonderful messages. Our hearts are full of love for this little human, words can’t express. We are excited to be able to share these photos with you.⁣’

Eugenie went on to reveal the name was a touching tribute to Queen Victoria’s Husband Prince Albert, whose birth name was Franz Albert August Karl Emanuel, and Prince Philip, who is currently in hospital, writing: ‘On his grandfather’s birthday weekend, thinking of my grandfather, we are introducing our little boy. 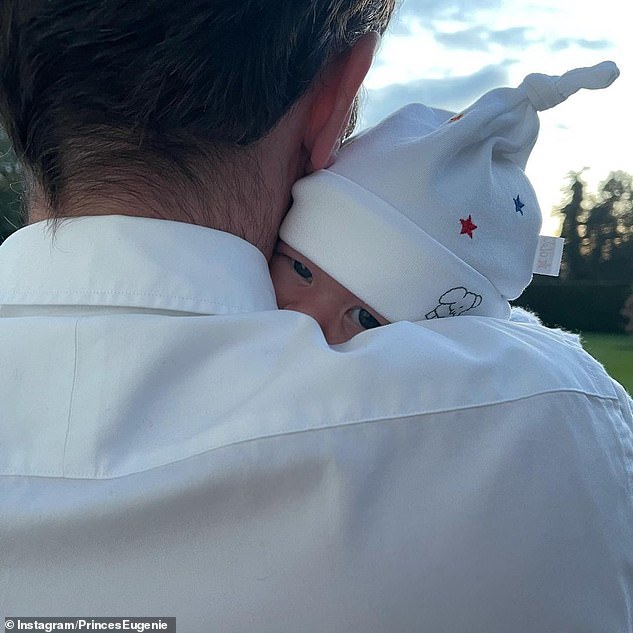 After celebrating her 31st birthday yesterday, the new mum took to Instagram to share adorable snaps of baby August, who was born on February 9 – before referring to him as ‘the best present she could ask for’

The new mum shared another look at her newborn while celebrating Mother’s Day on  Instagram earlier this month, with a sweet picture of her baby lying among some daffodils.

Although his head is turned away from the camera, the young royal can be seen donning a patterned babygrow adorned with whales, a knitted white cardigan, matching hat and fluffy rabbit slippers. 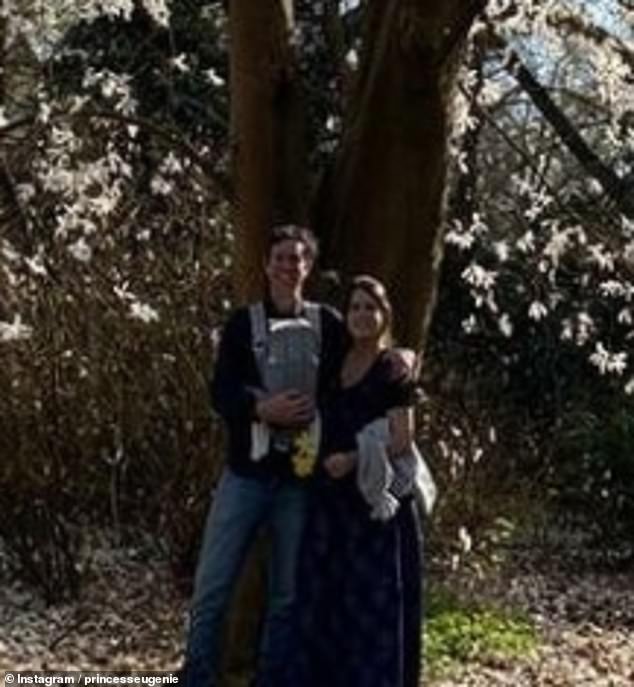 The picture shows a beaming Eugenie next to her husband Jack Brooksbank, 34, who is holding their son August, born on February 9, in a baby carrier fastened around his chest.