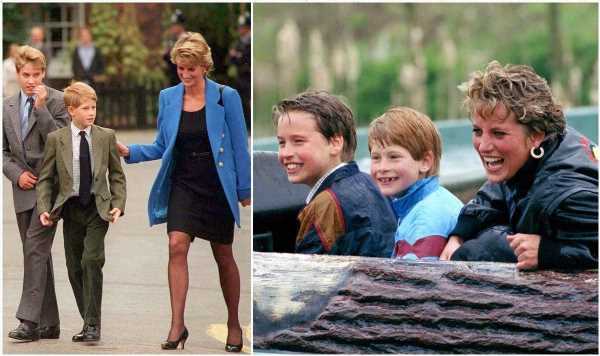 Princess Diana plays with Harry and William in 1986

Diana, Princess of Wales was famously devoted to her children, Prince William and Prince Harry. In a recently resurfaced video clip from 1986, Diana could be heard telling off a sulking Prince William who was aged four at the time. She said to William: “It’s time to go,” and the young Prince looked very sad about this prospect.

Diana then said: “All right, Harry will have all the fun then,” and William started screaming “no, no, no” as he ran after his mother and younger brother.

She said: “There are ongoing PR attempts to smear Diana by painting her as a ‘flawed’ and worse.

“But this cute clip of her acting like a very calm, caring but also smart and drama-free mother could be described as a timely reminder of the woman a whole generation fell in love with back in the day.

“She was carrying Harry on one hip in a gesture of utter confidence that left him clearly feeling safe.

“Meanwhile, she was also keeping her left hand free.

“This way, Diana navigated her older son William’s mini-rebellion with a firmness that prevented a sulk from upgrading into a full-on tantrum,” the expert noted.

Judi continued: “There are no signals of annoyance, impatience or exasperation from Diana.

“Neither her vocal tone nor her pace altered as she turned her back to let William know she was not going to engage with his rebellion.

“But instead she suggested the fun he would be missing out on if he stayed out there in the bushes.

“This is a trick that brings him out of his ‘hide’ and running in after her in record time.”

Earlier on in the clip, Diana could be seen playing with her sons on climbing frames and swings.

Judi commented: “She had also previously been playing with the boys on their slide and climbing frame.

“She used the kind of relaxed and synchronized mutually-tactile behaviour that suggested this playing was a normal part of the boy’s lives.

“Rather than an uncommon, performed display for the cameras before they were put back into the care of a nanny.”

When it came to parenting, Diana regularly broke from tradition.

The Princess chose to take William with her on her first overseas tour in 1983 when he was nine months old.

This was despite the Queen leaving a young Prince Charles in the care of nannies when she went on royal visits.

William and Harry also did not have any homeschooling as many royals before they had.

Aside from taking the boys along to formal engagements, Diana also made the boys do plenty of normal activities outside of their royal appearances.

They were once pictured leaving Kensington having watched Disney’s Jungle Book.

They also visited Thorpe Park, with a number of photographs from a trip in 1993 showing Diana laughing while aboard some of the rides.