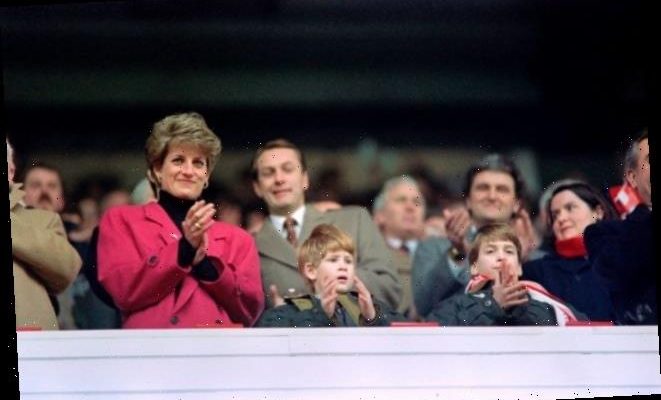 Prince Harry, Duke of Sussex and Prince William, Duke of Cambridge lost their mother when they were just boys. Following a tragic car accident, they found themselves at the ages of 12 and 15 without Princess Diana. Today, they continue the legacy she left behind and reminisce on fond memories they got to share with their late mother.

Diana once spent Easter weekend taking William and Harry on pony rides. On other occasions, she took her sons to an amusement park or made them laugh with her sense of humor. Ahead, we’re looking back on forgotten photos of Diana with William and Harry.

As members of the British royal family, Harry and William traveled a lot with their parents Diana and Charles, Prince of Wales. From vacations to official visits, they got to see many places around the world.

William and Harry went to Niagra Falls Diana. Not like a typical visit, the young princes were dressed up for the occasion.

They put on jackets to keep them dry. Judging by the look on William’s face he wasn’t too happy about the matching jackets or all the cameras.

William made an almost identical expression when he and his younger brother wore matching outfits to the airport with Diana.

Years later, Harry commented on Diana always putting him and William in the same clothes, according to Harper’s Bazaar.

“I genuinely think she got satisfaction out of dressing myself and William up in the most bizarre outfits – normally matching,” he said in a documentary marking 20-year anniversary of Diana’s death.

Yet again with the matching outfits, during a vacation to Majorca, Spain, Harry and William stood with Diana for a photocall. Not pictured is their father, Charles.

They had fun outings together

When they weren’t traveling, Diana took William and Harry on fun outings around London, England.

Look closely and see a young Harry sitting on the driver’s lap with William and Diana to his left.

And William and Harry waved to people in very similar but not matching outfits.

For what appears to be a more formal visit, William and Harry accompanied Diana on a trip to the Natural History Museum. It looks like Harry had his hands full with books from the gift shop.

Wherever they were going, it appears William and Harry were both having a good time.

Not exactly a fun time judging by the look on a young William’s face, he joined his grandmother on his mother’s side, Frances Shand Kydd, Diana, Harry, and his cousin, Alexander Fellowes, at a family wedding rehearsal.

Again, not necessarily their definition of fun but Harry and William appeared to be in good spirits on their way to school with Diana. Harry gave an adorable way while William grinned.

Even though Diana got taken from their lives far too soon, Harry and William had many great moments with their mother.