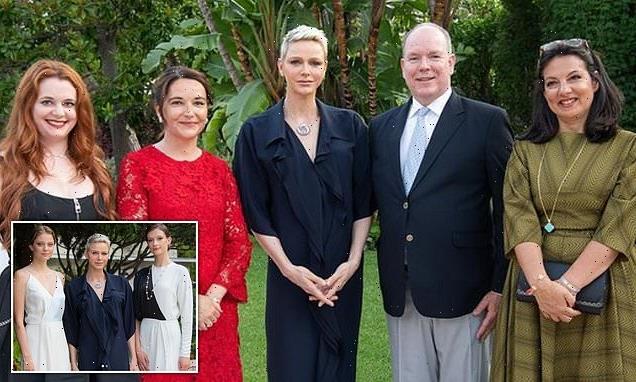 Princess Charlene of Monaco looked sleek in black as she enjoyed cocktails with her husband and guests in the palace gardens.

The Princess, who has recently returned to the public eye after months of absence due to ‘health issues’, joined her husband Prince Albert to meet with guests yesterday evening.

The Princess paired her black, frilled dress with a statement silver necklace, which complemented her signature pixie-crop.

Her dewy make-up made her complexion flawless, yet the Princess, who has been absent at many events due to ‘health issues’ seemed serious as she posed for photos. 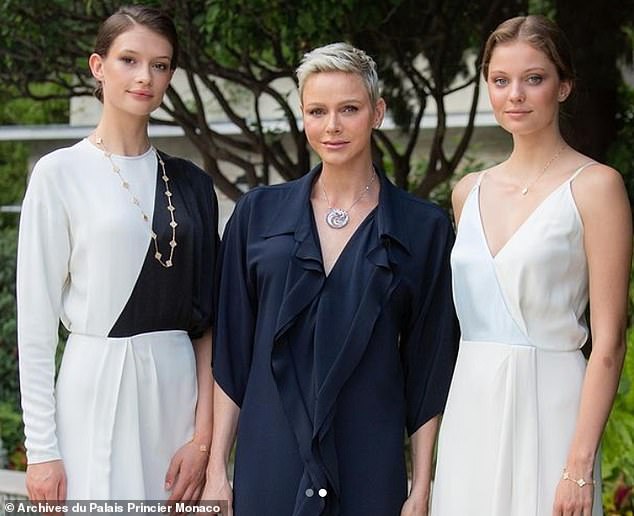 The caption read: ‘LL.AA.SS. Prince Albert and Princess Charlene received, in the gardens of the Prince’s Palace, some guests of the Van Cleef & Arpels House for a cocktail.

‘On this occasion the guests were able to discover the new Alhambra creations in support of the Princess Grace Foundation-USA.’

‘The foundation is an enduring link between Grace Kelly’s America and Prince Rainier’s Monaco, the Princess Grace Foundation-USA enhances her iconic legacy and builds upon the connection between the Principality of Monaco, the Princely Family, and the United States.’ 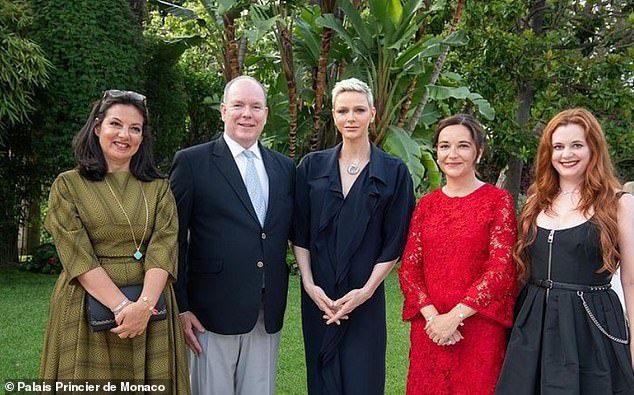 Princess Charlene and her husband Prince Albert of Monaco posted the summery snaps to Instagram where the royal is seen in the center, with her blonde hair perfectly coiffed

Princess Charlene makes headlines often, from her days as an Olympic swimmer and her recent health issues to her marriage to Prince Albert of Monaco.

The 44-year-old has been out of the spotlight for almost a year, with a ‘medical emergency’ prompting her to take an extended leave of absence.

This week, the Princess delighted tourists by making a surprise appearance during a guided tour of the Prince’s Palace.

The royal, 44, who shares seven-year-old twins Gabriella and Jacques with husband Prince Albert, 64, posed for photos and chatted to visitors taking in the grandeur of the dramatic fortress. 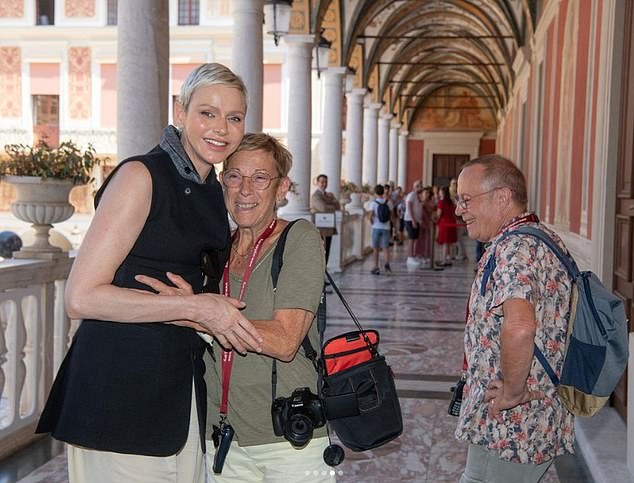 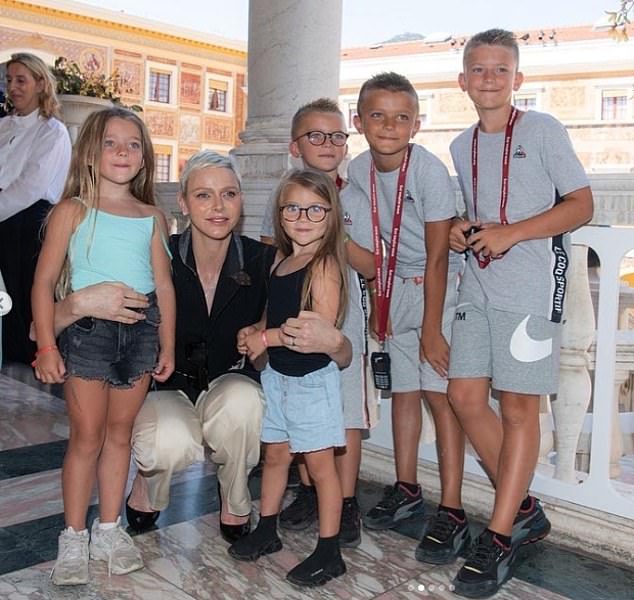 She has only recently re-entered public life after largely remaining quiet over the last 18 months, but rumours have swirled that she is receiving £10million a year to appear at her husband’s side at official engagements.

Leading French media reported the ruler of the Mediterranean principality was doing everything possible to keep Charlene ‘at his side at public events’.

However the Prince recently hit back at the reports, saying they had caused him ‘hurt’.

He told French Sunday paper Journal de Dimanche: ‘We missed the princess a lot. And we were obviously hurt by the malicious rumours that were peddled,’

‘But we were able to stay united despite the distance, we spoke to each other often.’

January 27 – Charlene is pictured with Albert for the Sainte Devote Ceremony in Monaco.

March 18 – Charlene is pictured at the memorial for the late Zulu monarch, King Goodwill Zwelithini at the KwaKhethomthandayo Royal Palace in Nongoma, South Africa

April 2 – Charlene posts an Instagram picture of herself, Albert and their twins Jacques and Gabriella for Easter.

It is unknown where the image was taken.

May 8 – Albert, Jacques and Gabriella attend a Grand Prix event in Monaco without Charlene

May 10 – Albert attends Monaco Gala Awards in Monaco without Charlene

June 3 – New photos emerge of Charlene on her conservation trip

June 24 – Charlene’s foundation releases a statement saying the royal is unable to travel and is undergoing procedures for an ear, nose and throat infection

July 2 – Charlene and Albert mark their 10th anniversary separately. ‘This year will be the first time that I’m not with my husband on our anniversary in July, which is difficult, and it saddens me,’ Her Serene Highness Princess Charlene said in a statement.

July 3 – Albert appears with glamorous niece Charlotte Casiraghi at the 15th international Monte-Carlo Jumping event, which is part of the Longines Global Champions Tour of Monaco,

August 13 – Charlene undergoes a four-hour operation. The reason is not announced

September 2 – She is discharged, with a statement from the Palais Princier reading: ‘Her Highness is closely monitored by Her medical team who said that Her condition was not worrying’

November 8 – Charlene arrives back in Monaco. Prince Albert said within hours it became clear she was ‘unwell’

Following his return from the trip, Prince Albert holds an intervention with Charlene’s brothers and a sister-in-law in which Charlene ‘confirmed’ she would seek ‘real medically framed treatment’ outside of Monaco

January 25 – Charlene celebrates her birthday alone outside of Monaco

March 14 – The royal palace announced Charlene had returned to Monaco.

May 18 – Prince Albert takes twins to Disneyland without Charlene

May 29 – Charlene and Albert appear together at Monaco F1

June 22 – Charlene and Albert take their children to Oslo, Norway