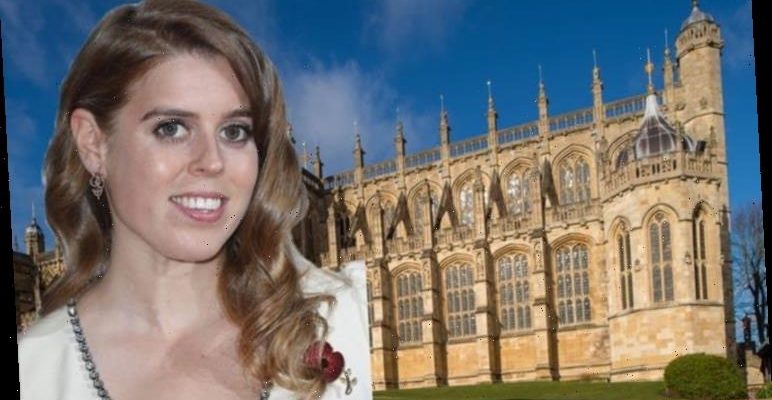 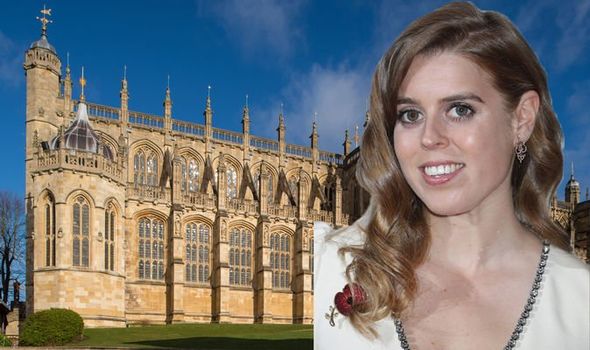 Princess Beatrice and Edoardo Mapelli Mozzi got engaged in late September. In an official statement released by Buckingham Palace, it stated: “The Duke and Duchess of York are delighted to announce the engagement of Her Royal Highness Princess Beatrice of York to Mr Edoardo Mapelli Mozzi.” The statement added Princess Beatrice and her fiancé will wed in 2020, but initially no details were released. Following their engagement announcement, a series of photographs – taken by Princess Eugenie at the grounds of Windsor Great Park – were released.  Were these the first clues that Beatrice would shun royal tradition?

Princess Beatrice wedding: could she ignore this tradition

The picture shows Princess Beatrice wearing a gorgeous floral Zimmerman dress while embracing Edoardo, who is dressed in a dark navy suit.

In a joint statement, the betrothed couple said: “We are extremely happy to be able to share the news of our recent engagement.

“We are both so excited to be embarking on this life adventure together and can’t wait to be married.”

In a touching tribute to his wife-to-be, Edoardo then took to Instagram to share a series of photographs by Misan Harriman at Royal Lodge, Windsor Great Park – which shows the pair cosying up to each other, giggling and pulling playful faces at one another.

Posting the pictures to his official Instagram account, he said: “You will never be along my love, my heart is your home. Hand in hand, today, tomorrow and forever.”

The rather untraditional royal announcement photographs were praised online for their “natural” and “realistic” portrayal of the happy couple.

One royal fan took to Twitter and stated these were her favourite announcement photos “by far”, she wrote: “Hands down these are my favourite royal engagement photos by far! They look so natural and down to earth, a couple just having fun.” 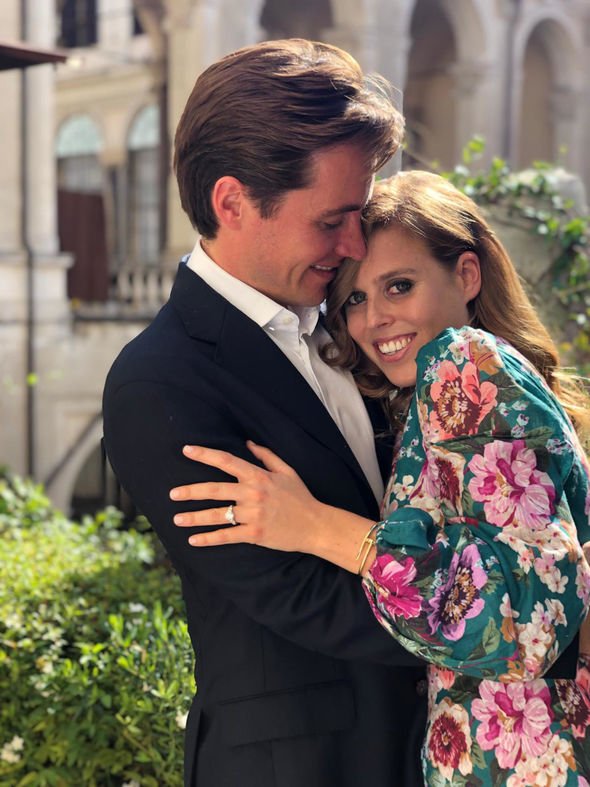 Eugenie’s official engagement pictures back in January 2018 were taken in the Picture Gallery at Buckingham Palace by Press Association photographer, Jonathan Brady whilst cousin Harry and Meghan’s photographs were taken by fashion photographer Alexi Lumbomirski at Frogmore House, Windsor.

Putting their own personal touch to the announcement photographs wasn’t where it stopped. Although Princess Beatrice could be the last royal bride to walk down the aisle for a while, it has been reported Beatrice has ripped up the entire royal rule book as there will be no carriage ride or procession for Princess Beatrice at her wedding – and no reception at Windsor Castle either.

Beatrice has supposedly told her parents she isn’t interested in a big showy event at Windsor, especially after younger sister Eugenie was ridiculed last year for her wedding costing the taxpayer about £2 million to police.

Opting instead for a more conservative and low-key venue to host the reception, potentially even at her parents house.

By dropping to ninth in line to the throne – due to the birth in May of Prince Harry’s son, Archie – Beatrice can now opt in and out of royal protocol.

Eager to take advantage of her freedom, Beatrice broke royal tradition by not asking permission from the Queen to get engaged and will not be obliged to have the full procession.

Without a procession, she won’t have to face the embarrassment of parentally getting tuned down by the BBC for TV coverage of the event, as Eugenie was.

A low-key affair will also keep cost down, which will be welcome news to the public. 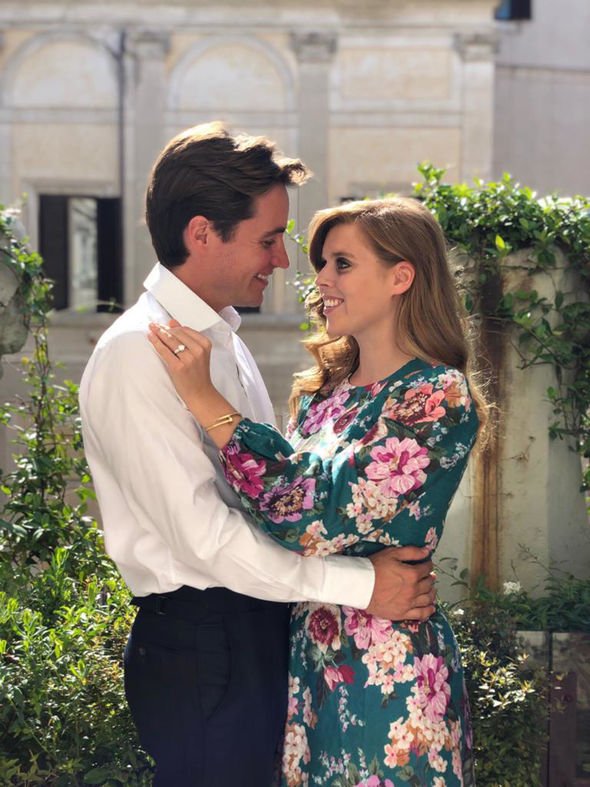 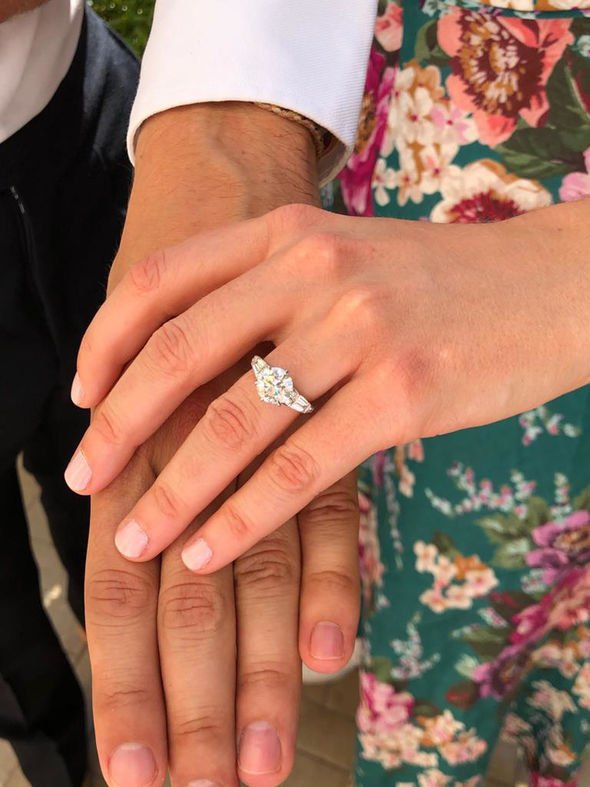 Other traditions we could see Beatrice potentially ignore?

The bridal bouquet is a central part of every bride’s ensemble and delicate white flowers are the traditional choice for royal family members.

From Princess Diana to Zara Tindall, Kate, the Duchess of Cambridge and Meghan Markle, a long list of royal brides have all chosen one particular flower to feature in their bouquets – lily of the valley.

However, with Beatrice’s newfound freedom and want to make this wedding her own, could she shun this tradition all together and instead go for roses in her bouquet – the national flower of Italy?

Although it is very likely Beatrice will have a photograph taken of her wedding party and family, it is unknown whether she will share this personal photograph with the rest of the world.

There is a long line of tradition where the dress and veil of the royal bride be designed by a British designer, however, there is speculation, with Beatrice’s freedom, she will be able to defer from this tradition.

She very well may decide to go with an Italian designer as a nod to her husband to be’s heritage.

It’s a stipulation that dates back to before the 1950s when upper class and royal women rarely showed their hair in public, and now it’s just a tradition. This royal hat parade is even more beautiful than during the Ascot races. However, with the revelation of Beatrice’s want for a low-key wedding, this is another tradition that Beatrice could shun as did her aunt and uncle, Prince Edward and Sophie of Wessex, did during their wedding.