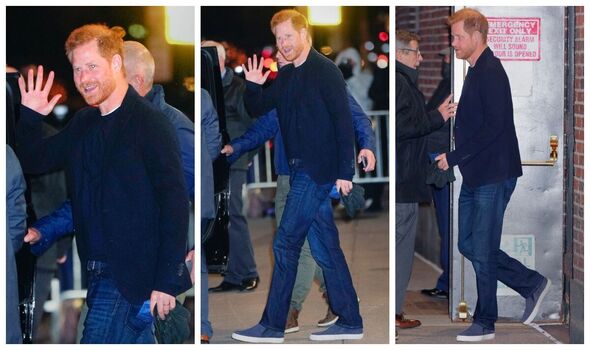 Prince Harry, Duke of Sussex, 38, was seen leaving “The Late Show With Stephen Colbert” on January 9 in New York City, where he filmed his fourth interview to promote his memoir Spare. As he left, the Prince was photographed waving to the crowds of fans and smiling.

Judi James, a professional body language expert spoke exclusively to Express.co.uk to explain what Harry’s body language was like.

She claimed: “With his pink, shiny and rounded cheeks and his gleaming, wide-eyed facial expression, Harry still looks like a man in a state of thrilled excitement after spilling more royal beans on the Stephen Colbert show.

“In terms of lapping up the praise and the attention, he shows no sign of flagging here, with his splayed-hand wave to the fans that came with an opened mouth to create feelings of empathy and recognition.”

She explained: “It’s not total A-list, which would require more of a head-down, covered face, ‘don’t mob me’ body language.

“But it’s only partly royal, with the wave a little too friendly to be a regal one.”

Judi suggests that as opposed to an “A-List” or a “regal” pose, Harry falls somewhere between the two.

She commented: “It’s more early days celebrity with a desire to be liked, although the slight cooling of the smile in one shot might be a necessary response.”

Prince Harry has railed against the “British press” and the “British media” in all of his interviews thus far.

Therefore, according to Judi, the Duke’s “cooling of the smile” was “necessary” to keep up with his narrative.

Judi added: “This would be if Harry did happen to find himself gazing into the lens of the press rather than the fans.”

“Harry’s dislike for the press was shown to be intense during all of his interviews, which could present him with a quandary when he’s making appearances like this.”

Prince Harry reportedly downed tequila shots in his interview with Stephen Colbert ahead of its broadcast in the US tonight.

Fans attending the recording at the Ed Sullivan Theater in New York City said that the Duke of Sussex answered a series of questions from the late night host in his Colbert Questionert segment.

On Monday, dressed in a grey suit and navy shirt, Harry strode from his SUV into the studios to meet Mr Colbert.

He paired his grey suit and navy shirt with a navy pair of trainers that had clean white soles.

There was no sign of his wife Meghan Markle, 41, or his children, Archie, three, and Lilibet, one, who are believed to be at home in California.

The Duke and Duchess of Sussex relocated from the UK to California in early 2020, and have, since early 2021, been raising their two children in an £11million mansion in Montecito.

This home is thousands of miles away from the Duke’s family in the UK.