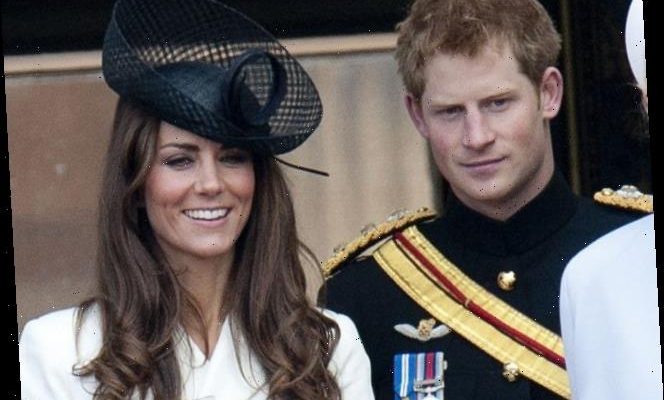 Prince Harry seemingly confirmed the rumors that he is feuding with Prince William in a new documentary, though there was a long time when he was close with his brother and Kate Middleton. All three would appear at royal engagements and work together for successful causes like the Heads Together project and the Invictus Games. Prince Harry was so close to the Cambridges that he reportedly pinched Middleton in her bottom during Trooping the Colour in 2011 – which went surprisingly better than you might think.

Prior to his relationship with Meghan Markle, Harry frequentlyworked alongside Prince William and Middleton. He was even an active part oftheir charity, The Royal Foundation, an organization Prince Harry and Markleleft earlier this year.

But during Trooping the Colour in 2011, eyewitnesses claimed thatPrince Harry engaged in some playful behavior that shocked Middleton.

According to Express, Middleton bent down to talk to somechildren while on a balcony of Buckingham Palace when Harry reached down andpinched her in the bum.  The source saysthat Middleton was shocked by the move and tried to keep it together beforebursting out in laughter.

Other members of the royal family were also on the balcony andcouldn’t help but laugh at what had just happened.

“Kate flinched and her face froze, as if she couldn’tquite believe what was going on behind her back,” a source revealed.“And then she and everyone burst out laughing.”

Harry had a very close friendship with Middleton at the time and viewed her like a sister. Middleton was also reportedly fond of Harry, whom she met while dating Prince William at St. Andrews.

Why are Harry and William feuding?

Prince Harry opened up about his feud with Prince William in anew documentary titled Harry and Meghan:An African Journey. The Duke of Sussex revealed that his relationship withhis brother has been strained as of late.

“You have good days, you have bad days,” Prince Harry shared.

He then noted that being a part of the royal family means dealing with a tremendous amount of pressure, and when that happens, there will be fallouts along the way. While Harry later said that he still loves Prince William, he revealed that they don’t talk nearly as much as they used to and that he is now on a different path than his brother.

Harry didn’t give out any details about their feud, but someroyal fans are convinced that everything changed once Markle came onto thescene.

Prior to dating Markle, there is no denying that Prince Harry wasvery close to Prince William and Middleton. He even gave his brother theirmother, Princess Diana’s, engagement ring when he proposed to Middleton.

Harry was saving the ring for his future wife and offered it upbecause he viewed Middleton as a sister.  But the close bond he shared with theCambridges fell apart once he started dating Markle, and the couple’s recentdocumentary has not helped the situation.

Markle and Prince Harry’s documentary only made the feud worse

Prince Harry and Markle’s revealing interviews for the newdocumentary has reportedly sent palace aids into a royal frenzy.  Inside sources claim that Buckingham Palacedid not see the documentary coming and have no idea how to handle thesituation.

William is also reportedly worried about what Harry and Marklewill do next, especially considering the rumors that the two are thinking aboutleaving the royal family altogether.

In the documentary, Markle opened up about the struggles she hasfaced since joining the royal family and becoming a new mom. The former Suits star admitted that times have beentough and that she often feels like she is barely surviving behind the scenes.

The interview came weeks after Harry and Markle returned homefrom their 10-day tour of South Africa. The two are also expected to travel toAmerica next month to visit Markle’s mother, Doria Ragland.

Prince William and Kate Middleton have not commented on the rumors surrounding the new documentary or any comments made by Prince Harry and Meghan Markle.