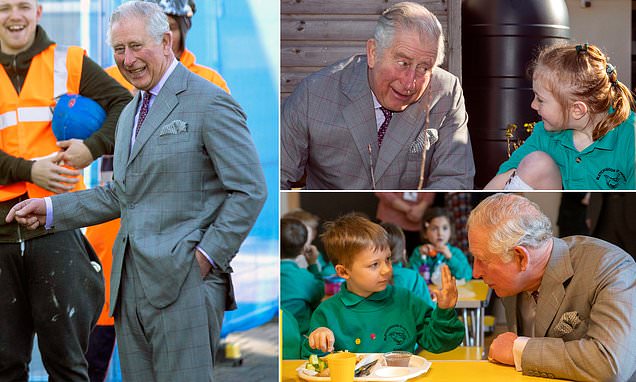 The Happy Prince! Laughing Charles looks animated as he goes back to the classroom to meet students on a visit to Oxfordshire

The Prince of Wales looked delighted as her met children from Bletchingdon Parochial Church of England School in Oxfordshire today.

Charles, 70, who today was without Camilla, laughed as he chatted to children from the countryside village, north of Oxford, which is built on land owned by his estate, the Duchy of Cornwall.

The school and its attached village hall opened in September 2015, and while Charles has visited the area before, today marked his first official trip to the completed classrooms.

As well as watching children demonstrate their baking skills as they made Celtic oatcakes, he helped to plant a tree on behalf of the Woodland Trust. 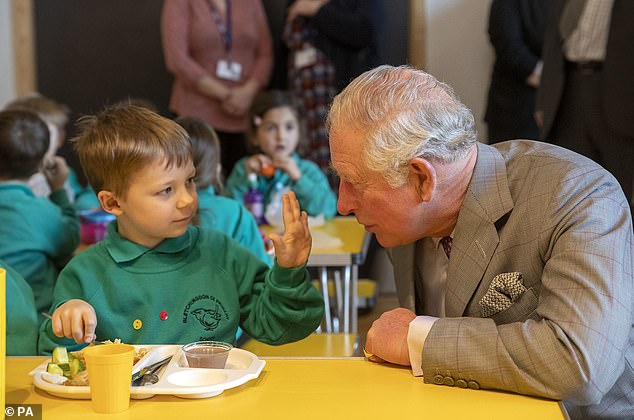 Charles laughed as he chatted to children from Bletchingdon Parochial Church of England School in Oxfordshire, including Mason who chatted to the visiting royal while eating lunch 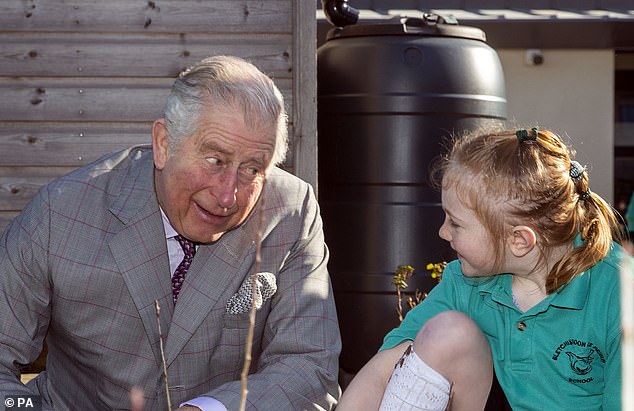 One school child, Mason, was pictured comically holding his hand up to the Prince while Charles knelt down during lunch.

He later looked very animated as he chatted to a pupil named Imogen outdoors during a tree planting session.

But it wasn’t just the children who met the prince – local builders also enjoyed a joke with the royal as Charles stopped for a chat on the building site.

Later, he planted a tree in the village, while many pupils braved the cold in green school jumpers to wave Union Jack flags. 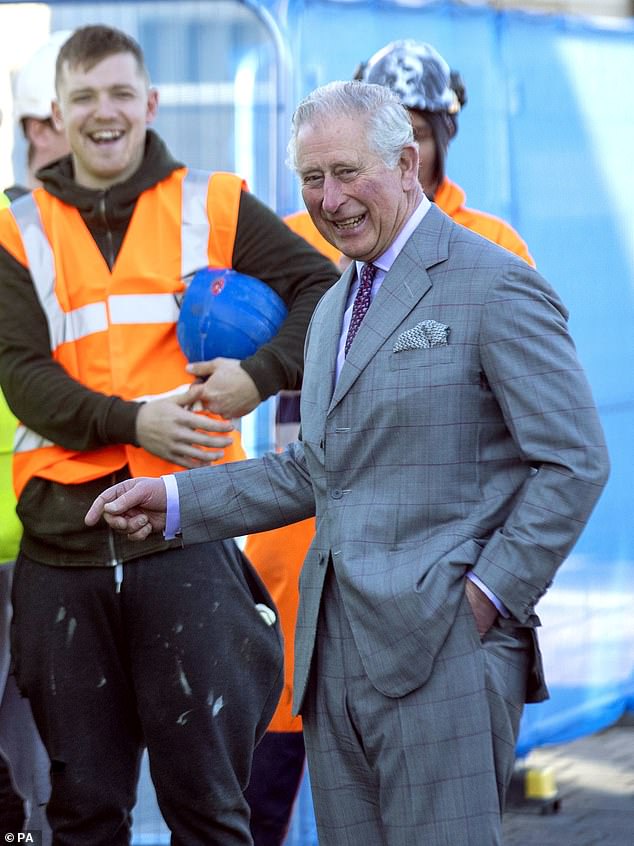 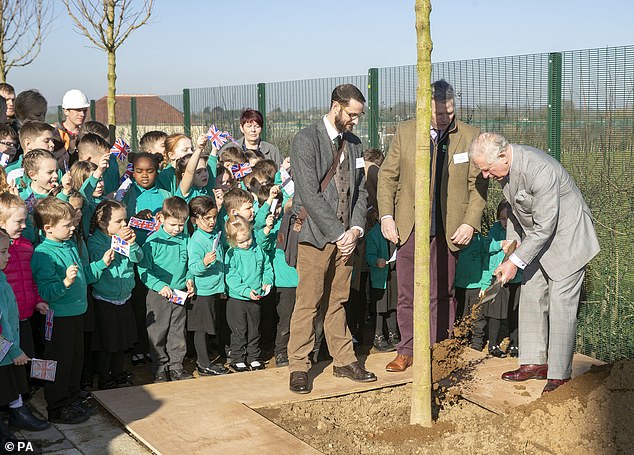 Showing he’s not afraid to get his hands dirty, Charles helped to plant a tree in the village 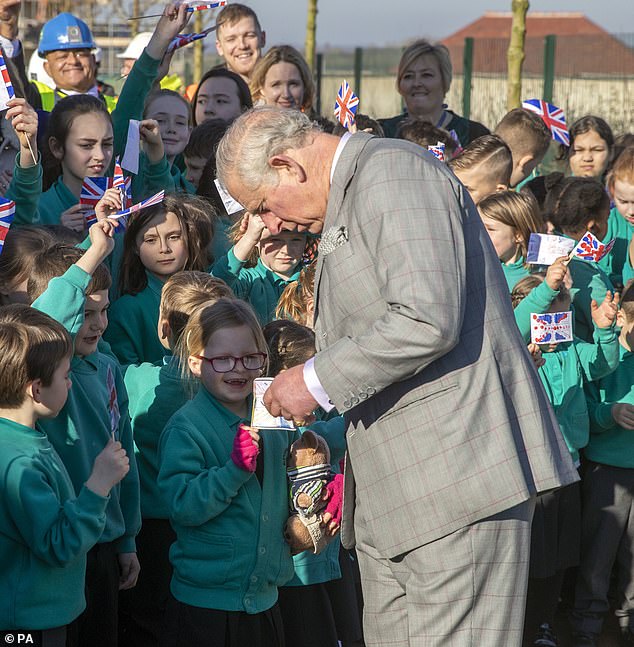 Crowds of school children waved flags and looked on in awe, clearly delighted to meet the Prince

The visit comes just days after Charles told children he hopes they will make a ‘real difference to the future of this country’ as he visited a school affected by the Grenfell Tower tragedy.

In a visit to the Kensington Aldridge Academy (KAA), on Wednesday Charles also suggested the children would be the next generation of cyber security experts, during a special assembly featuring a choir and a dance routine.

He spoke to five pupils affected by the Grenfell disaster, telling them they were ‘lucky to have the opportunities of enrichment’ the school offered. 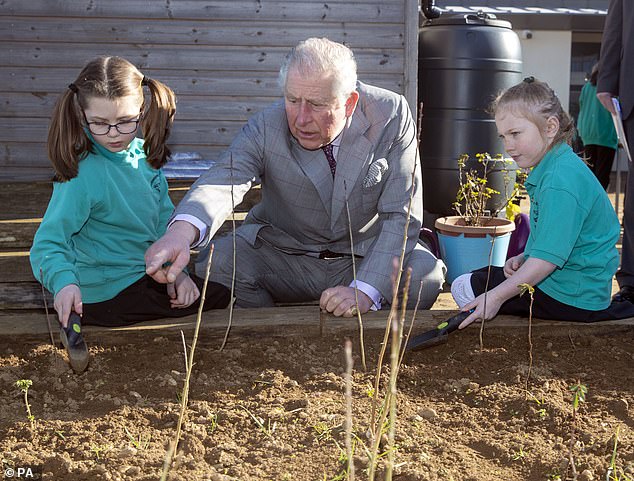 The Prince, a keen gardener,  helped pupils Imogen (right) and Avalyn (left) in the school 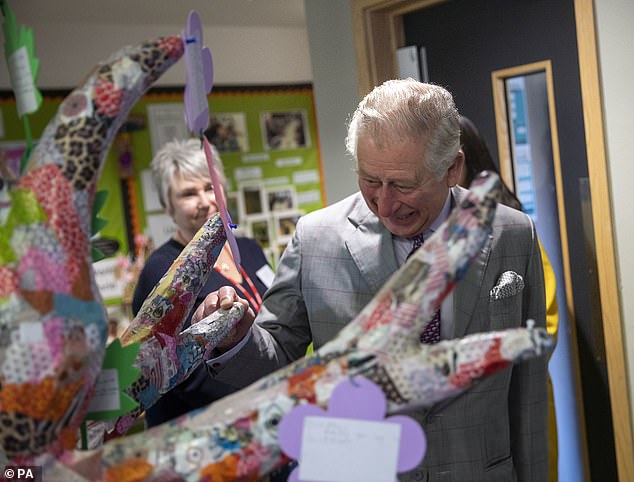 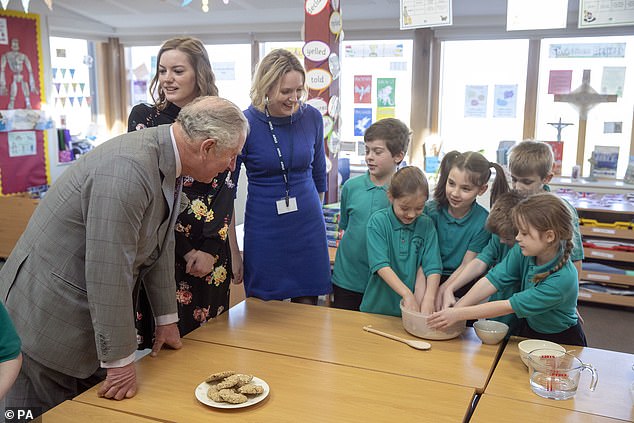 It’s a busy time as always for Charles, as Clarence House recently announced he will be joined by the Duchess of Cornwall on an upcoming royal tour of Cuba.

The couple are expected to meet some of Cuba’s most celebrated music stars when they make an historic visit to the country.

Charles and Camilla’s official four-day trip to the communist state in March, part of a Caribbean tour, will be a first by members of the monarchy.

At a Havana recording studio, the prince and his wife may meet members of the Buena Vista Social Club, although details are yet to be finalised. 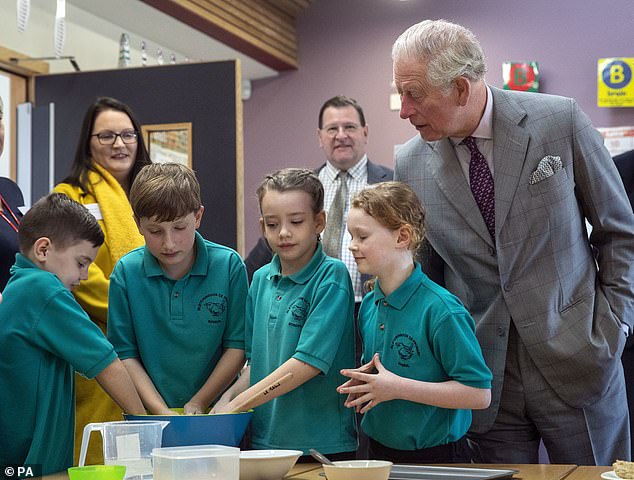 The Duke of Cornwall helped the pupils with their baking, as they handmixed the sweet treats 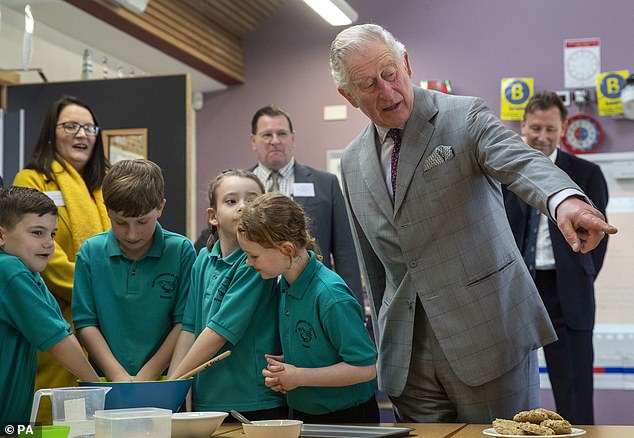 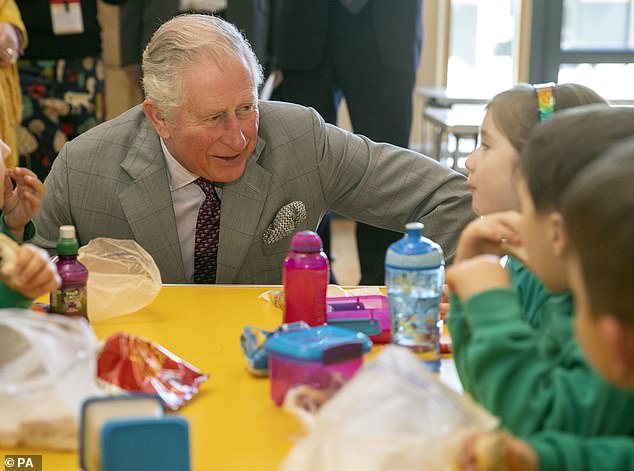 The Prince of Wales during a visit to Bletchingdon Parochial Church of England School on the Bletchingdon Estate Development in Oxfordshire, which is built on land owned by the Duchy of Cornwall

Other highlights of the Cuban trip will see the couple meet Havana owners of the famous vintage cars still running in the capital, although these will be British classics.

There are no plans for the royal couple to meet Raul Castro, the brother of Cuba’s former Communist leader Fidel Castro who died in 2016, but they will be guests of honour at an official dinner hosted by the country’s president Miguel Diaz-Canel. 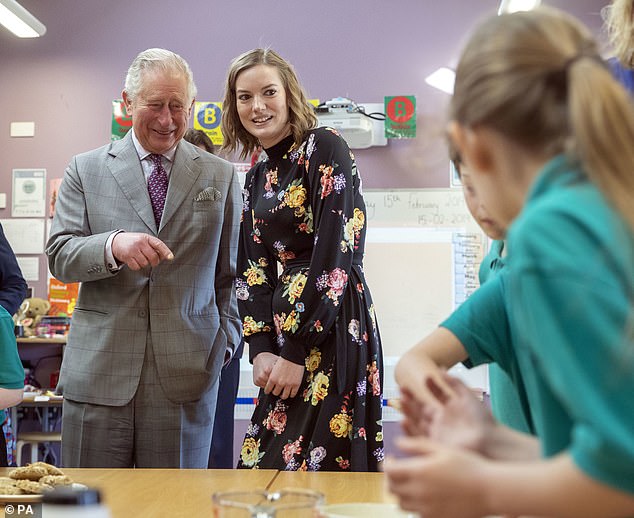 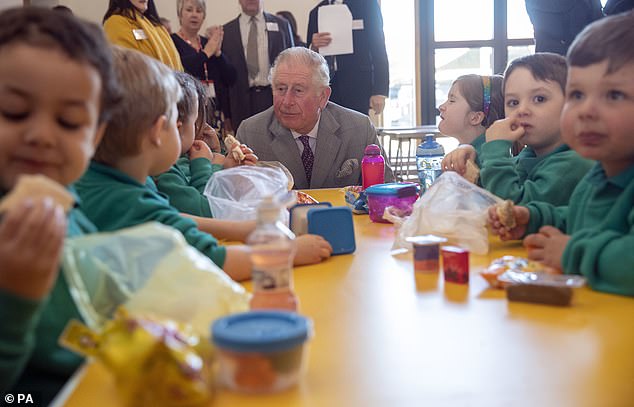 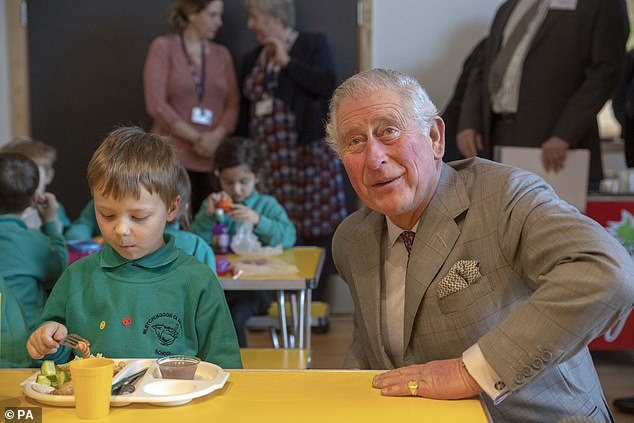 The Prince, who met Cuba’s president in November last year at his London home, Clarence House, today enjoyed a chat with Mason who tucked into a healthy school lunch 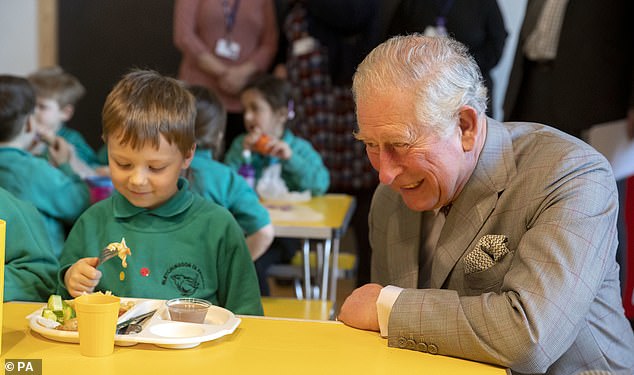 The Duke of Cornwall giggled as he met Mason, who looked adorable in with green primary school unifroem 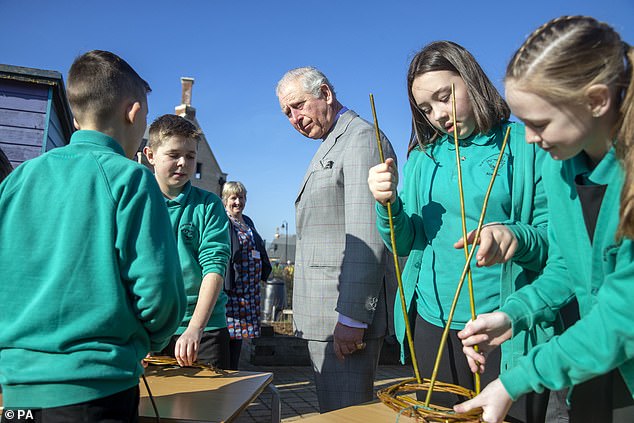 Charles also had a look around the primary school’s garden, and even helped the children plant a tree 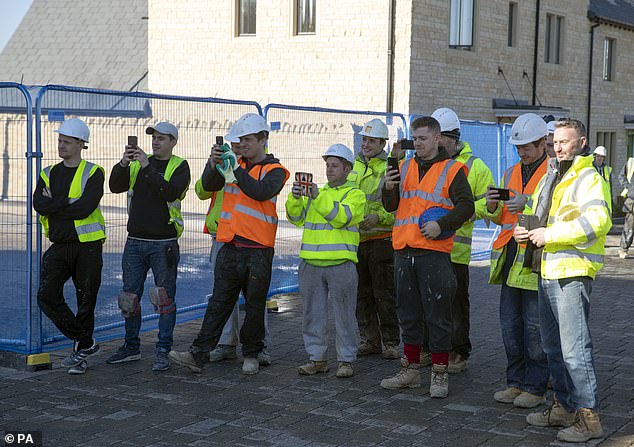 Say cheese Charles! The builders were quick to make sure they grabbed a snap of the Prince of Wales as he visited them of the Bletchingdon Estate Development