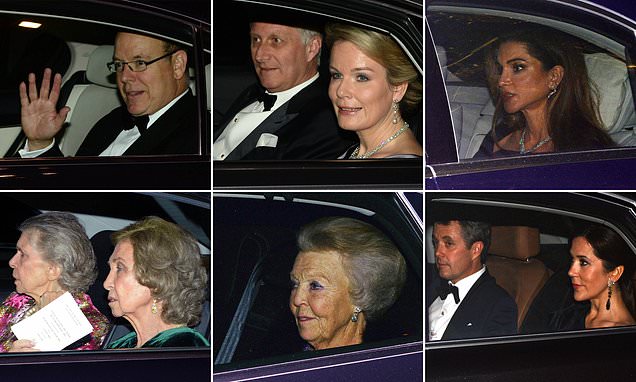 From the former Dutch queen to the son of Grace Kelly: The illustrious royals from Spain, Monaco and Greece who helped Prince Charles to mark his milestone 70th birthday

Glamorous royals from across the globe jetted into London last night to help the Prince of Wales ring in his 70th birthday.

Dripping in diamonds and pearls, the VIPs guests from Belgium, Jordan and Monaco were spotted arriving at Buckingham Palace ahead of a black tie reception and dinner held by the Queen.

Princes and princesses from Denmark Spain and the Netherlands also joined the lavish palace celebrations which were attended by Charles’ friends and extended family.

The Duke of Sussex was spotted driving his pregnant wife to the birthday celebration after Charles marked his big day yesterday by meeting 70 inspirational people also marking their 70th this year.

During the black tie dinner, the Queen gave a heartfelt speech in which she told guests what a ‘privilege’ it was for her, as a mother, to honour Charles on such a momentous occasion. 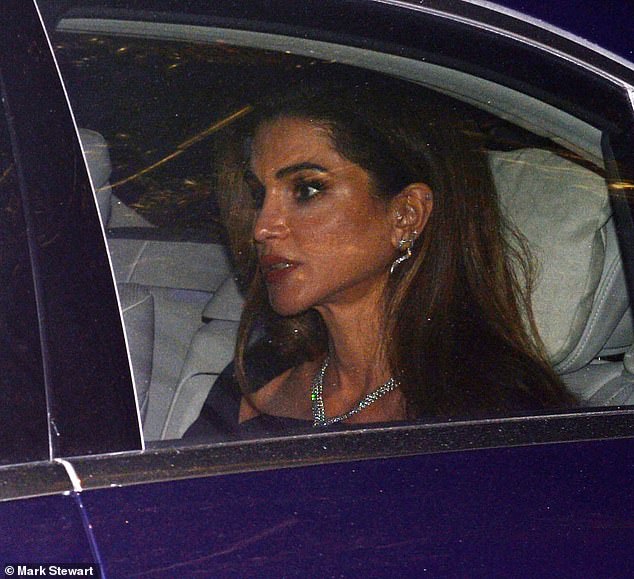 Queen Rania of Jordan, 48, arrives at Buckingham Palace for the birthday celebrations of the Prince of Wales on Wednesday night. She arrived without her husband King Abdullah II

Leading the VIP arrivals was Jordan’s Queen Rania, 48, who appeared without her husband King Abdullah.

Dripping in diamonds, the glamorous consort and mother-of-four looked immaculate for the birthday celebrations.

A former marketing guru and Apple employee, Rania is known for her penchant for designer clothing and who wore clothes costing an estimated £237,000 in 2017 alone.

The glamorous royal met her husband at a dinner party in 1993 and the pair wed just six months later.

Queen Rania has spoken in the past about how difficult it is when her children are away at school, and her excitement about having them home for breaks. 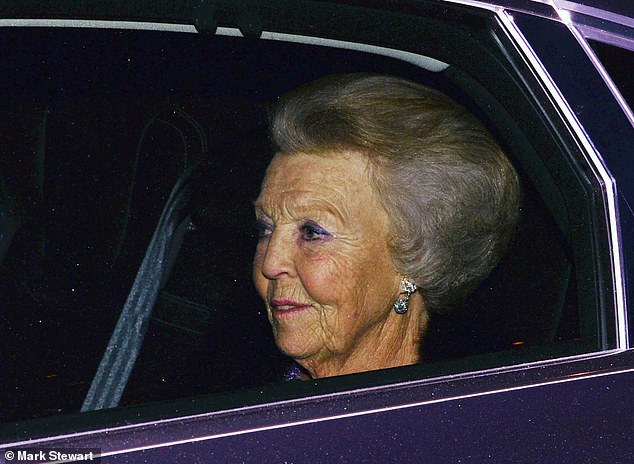 Princess Beatrix of the Netherlands, 80, arrives at Buckingham Palace on Wednesday night. Beatrix, whose husband Prince Claus died in 2002, stepped down as monarch in 2013

The former Dutch Queen, who abdicated in 2013, was attending on behalf of her son, King Willem-Alexander and his wife, Queen Máxima.

The 80-year-old royal looked the picture of good health, and while she didn’t offer passersby a glimpse of her outfit she was wearing a swipe of purple eyeshadow and glittering diamond earrings.

Glamorous Beatrix, whose husband Prince Claus died in 2002, stepped down as monarch in 2013 following a 33-year reign, taking the title Princess Beatrix of the Netherlands.

She was succeeded by her son, King Willem-Alexander and his wife, Queen Máxima, and now lives in the Drakensteyn Castle near the village of Lage Vuursche, occasionally undertaking official engagements.

Willem-Alexander was officially sworn in as king of the Netherlandsm – the country’s first male rule since 1890 – at a colourful ceremony in Nieuwe Kerk attended by 2,000 visitors from around the world.

In an emotional tribute to Beatrix, he said:’Dear mother, today you relinquished the throne. 33 years moving and inspiring years. We are intensely, intensely grateful to you.’ 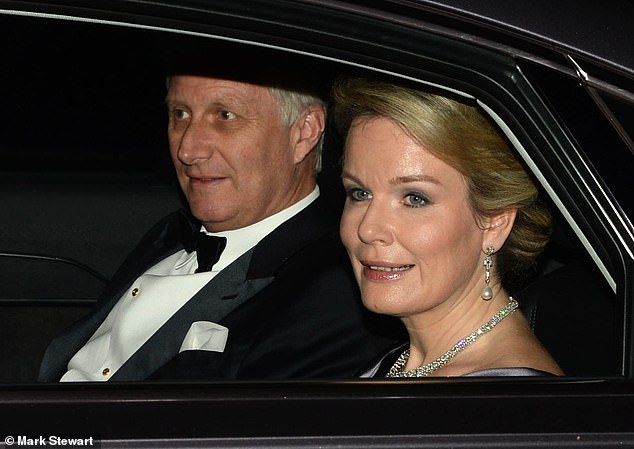 King Philippe and Queen Mathilde of Belgium join VIP guests at Princes Charles’ birthday. Mathilde, who has four children with her husband, was dripping in diamonds and pearls

Queen Mathilde has been married to King Philippe of Belgium for 19 years, who ascended the throne following the abdication of his father, King Albert II, on 21 July 2013.

Following the abdication of his father, King Albert II, Prince Philippe was sworn in before the combined chambers of parliament on 21 July 2013.

This year marked five years since he was crowned the seventh king of Belgium. 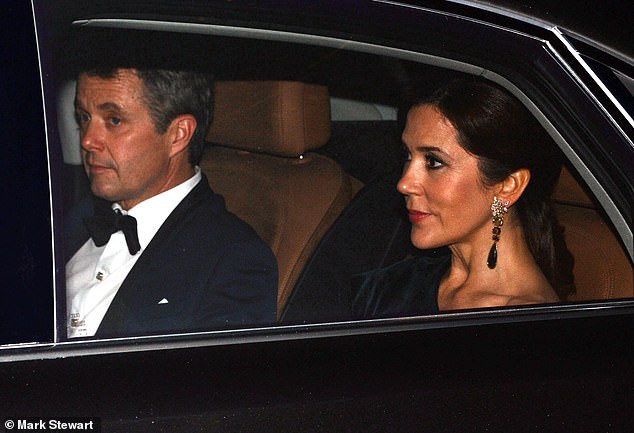 Crown Prince Frederik and Crown Princess Mary of Denmark arrive at Buckingham Palace. The couple share four children and spend much of their time in Copenhagen

The heir to the Danish throne and his wife were among the glamorous arrivals at the palace last night.

The love story between Princess Mary and Prince Frederick has been well documented, with the couple having met in a Sydney bar before Mary, born in Tasmania, moved to the northern hemisphere to be with Frederik.

In December, in a candid interview with Australian Women’s Weekly, the Crown Princess revealed that moving to the other side of the world was difficult.

The mother-of-four said: ‘I did experience a feeling of loneliness – short-term – when I first moved to Denmark,’ she told the magazine.

‘Moving to Denmark was a huge change in my life – a new culture, new language, new friends, and another way of life.’

‘So, I see it as quite natural that at times I felt quite alone or a little bit like I was on the outside looking in.’ 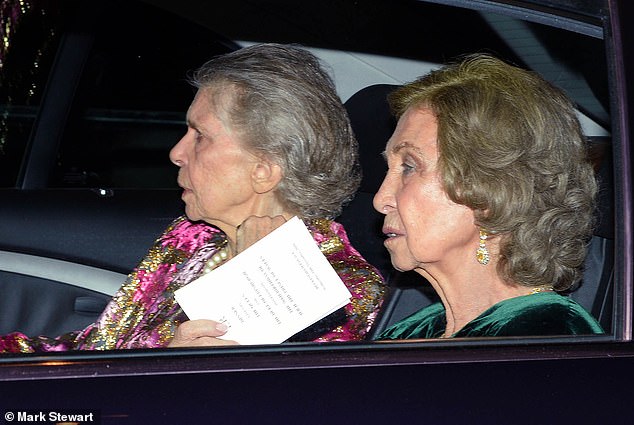 Spain’s Queen Sofiá, right, and Princess Irene of Greece, left, arrive at the palace last night. Despite her title, Irene has no official remit as a royal after the Greek monarchy was deposed and scrapped in 1973

Dripping in jewels and dressed in their finery, the two sisters arrived in the same car.

Queen Sofía of Spain, 80, and Princess Irene of Greece and Denmark, 76, are the daughters of of King Paul of Greece and his wife Princess Frederika of Hanover.

Sofía’s husband King Juan Carlos abdicated in 2014 in favour of his son, now King Felipe VI, who is married to Queen Letizia.

The royal couple did not attend last night’s celebrations with Felipe on a three-day visit to Guatemala.

Despite her title, Irene has no official remit as a royal after the Greek monarchy was deposed and scrapped in 1973. 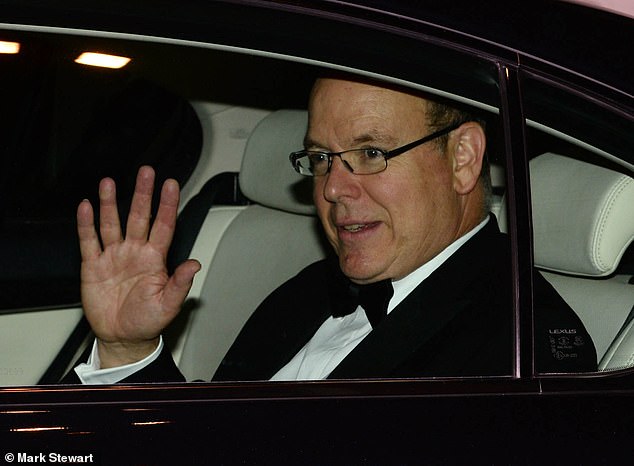 Prince Albert II of Monaco arrives at Buckingham Palace to ring in Prince Charles’ birthday. His wife, Princess Charlene, was in France meeting the Macrons on Wednesday

The reigning monarch of the Principality of Monaco appeared without his former Olympic swimmer wife Charlene for Prince Charles’ birthday.

Albert is the son of Hollywood legend Grace Kelly and Rainer III, and has four children including twins Prince Jacques and Princess Gabriella.

Known as a notorious ladies man, 60-year-old Albert long eschewed marriage, and many Monegasques had resigned themselves to forever having a bachelor prince before he married Charlene in 2011.

The constitution was even modified to ensure the continuity of the Grimaldi line, one of Europe’s oldest dynasties, in case Albert never produced an heir.

The prince acknowledged having fathered two children out of wedlock, but only his legitimate offspring would be able to succeed him.

His Zimbabwean-South African wife and the mother of the adorable twins was instead visiting Brigitte Macron in France on Wednesday. 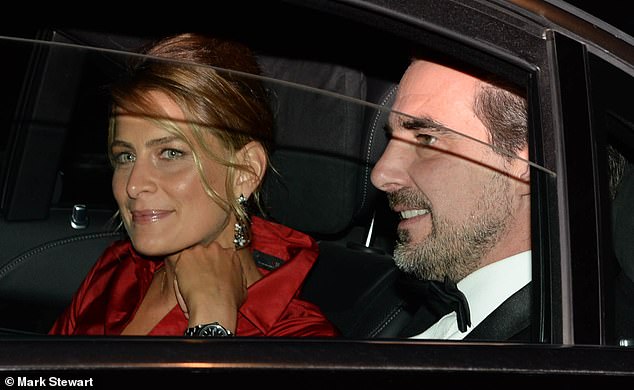 Prince Nikolas of Greece and Denmark and his wife Princess Tatiana leave Prince of Wales 70th party at Buckingham Palace. Greece’s monarchy was officially deposed in 1973

Glamorous Princess Tatiana of Greece and Denmark wore a shimmering red number with a statement high collar, while her husband Prince Nikolas looked smart in a dinner jacket.

Venezuelan-born Tatiana, 38, famously gave up her job as an events organiser for designer Diana Von Furstenberg soon after she married in 2010.

In 2016, she put her name to an illustrated cookbook called A Taste of Greece: Recipes, Cuisine & Culture.

The fashion-forward socialite is known for eschewing feminine floaty dresses in favour of loose-fitting androgynous suits.

Tatiana says she dresses to ‘suit her mood’ and does her best to ‘not follow trends’, but tries to support designers from her native country and wears labels such as Carolina Herrera.

Née Tatiana Ellinka Blatnik, she is married to the exiled son of Constantine II, the last king of Greece, and his wife, Queen Anne-Marie.

Greece’s royal family have no official role since the monarchy was deposed and scrapped in 1973.