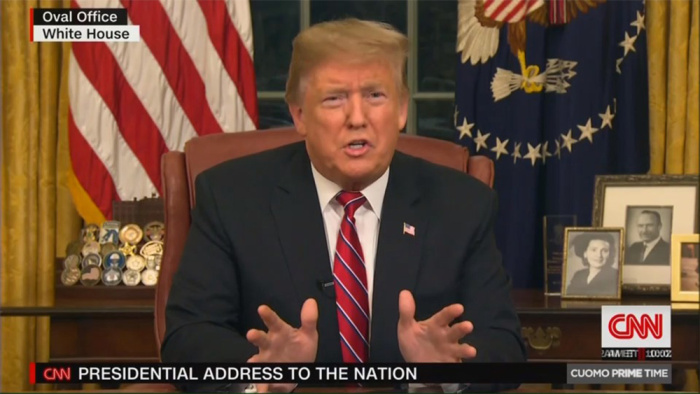 Coverage of President Donald Trump’s primetime address and the response from Congressional Democrats pulled in over 40 million viewers across all networks that carried the speeches.

The speech was carried by ABC, CBS, Fox Broadcasting, NBC, CNN, Fox News, and MSNBC on Tuesday night. Across those networks, CBS drew the biggest audience in total viewers with 8.09 million. Fox News was second with 8.04 million. NBC was third with 7.4 million, while ABC was fourth with 5.8 million. MSNBC came in fifth with 4.24 million and CNN was sixth with 3.57 million. Fox Broadcasting was seventh with 2.94 million.

The speech came amid an ongoing government shutdown. The issue at the heart of the matter is funding for a wall along the U.S. southern border with Mexico, which Trump made a signature campaign promise.

“This is a humanitarian crisis — a crisis of the heart and a crisis of the soul,” Trump said in his speech. As he has done in the past, he went on to describe crimes committed by immigrants as a justification for building the wall. “”How much more American blood must we shed before Congress does its job?” he said.

House Speaker Nancy Pelosi and Senate Minority Leader Chuck Schumer issued their rebuttal following Trump’s speech, with Schumer saying, “Democrats and the President both want stronger border security. However, we sharply disagree with the President about the most effective way to do it.”