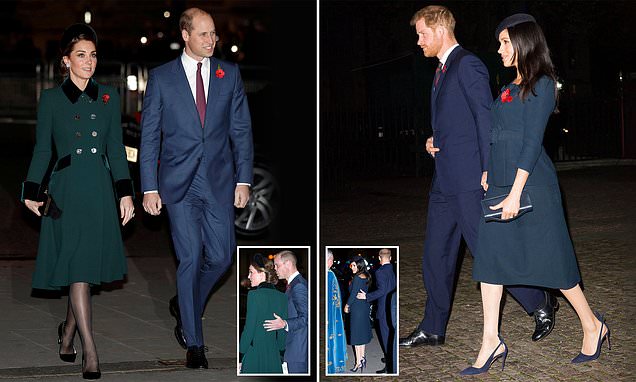 Radiant and respectful: Pregnant Meghan glows in a navy suit as Kate recycles green coat to attend Westminster Abbey service of remembrance – and they both get a helping hand from their Prince Charmings

Several members of the Royal family attended a Westminster Abbey service tonight to pay tribute to those who fought in the Great War.

A glowing Duchess of Sussex was among them, looking radiant in a double breasted navy dress complete with a square neckline and a chunky belt that showed off her blossoming baby bump.

Meghan completed her look with a dazzling pair of Aquazzura ‘Deneuve’ pumps, worth £490.

Kate opted for a more solemn look, with a flowing pine green double breasted Catherine Walker coat and a contrast collar and cuffs. She previously wore the outfit on St Patrick’s Day in 2017.

The Dukes, meanwhile, both stuck close to their Duchesses throughout the night and were pictured with a loving hand placed on their partner’s back. 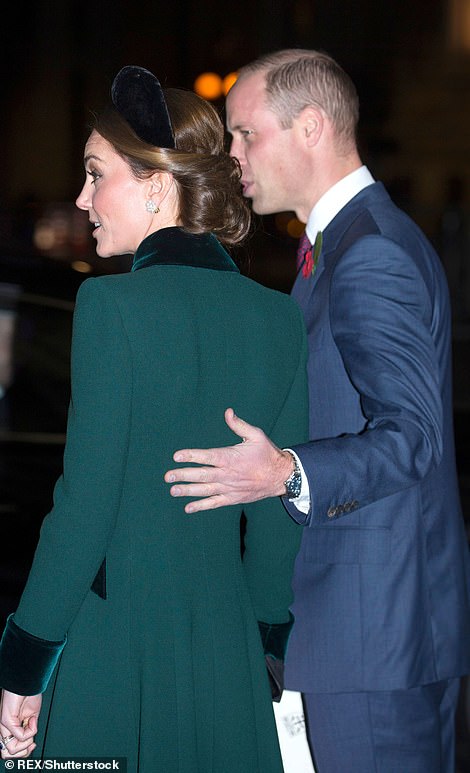 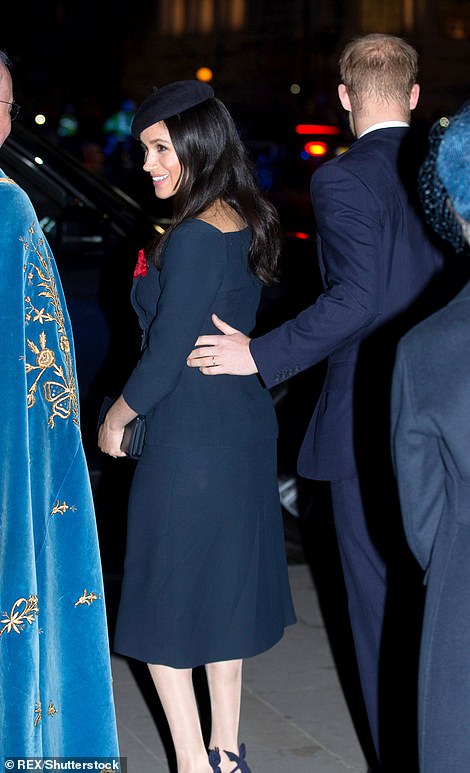 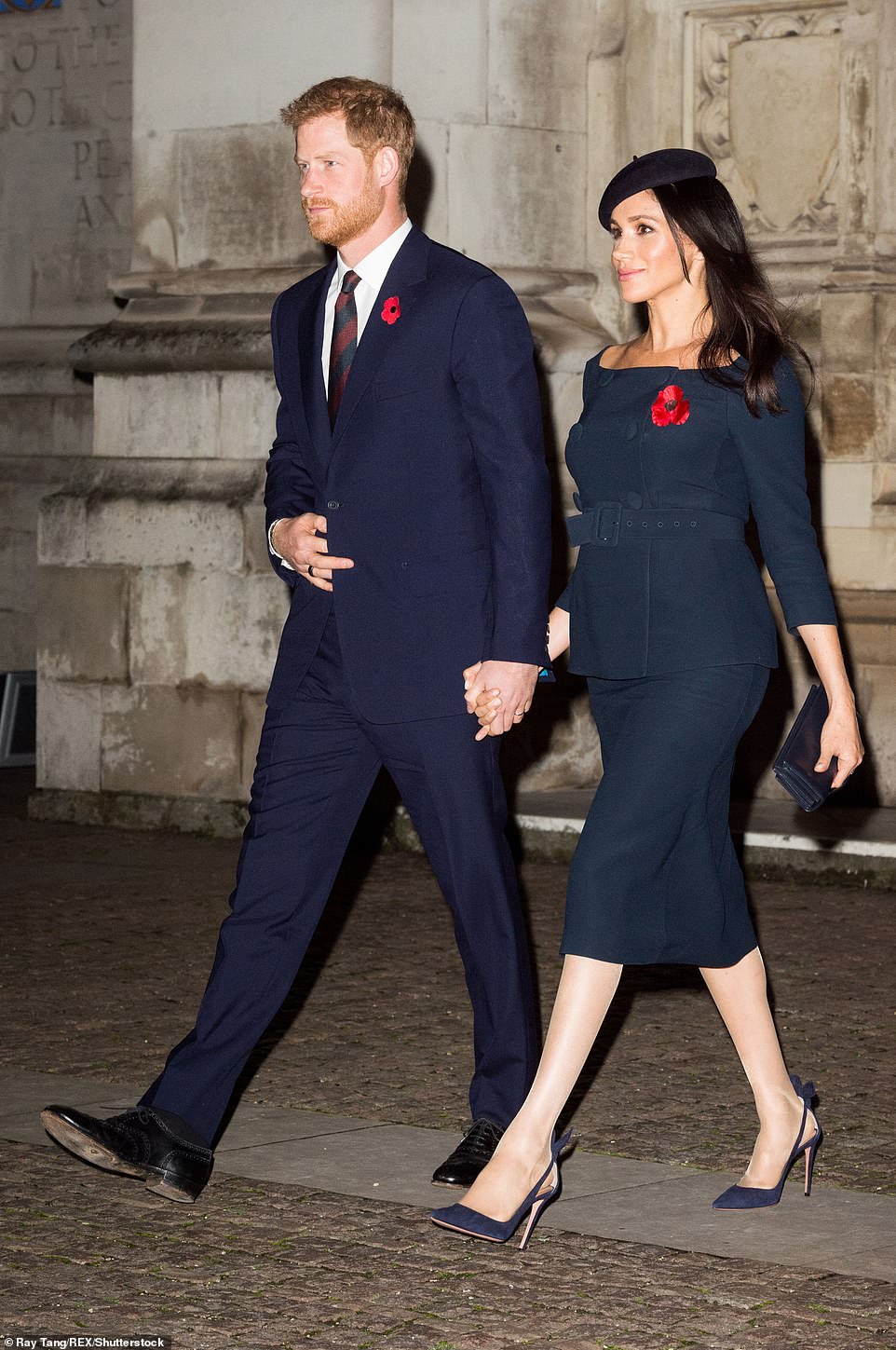 A glowing Duchess of Sussex looked radiant as she attended a remembrance service at Westminster Abbey with Prince Harry. Meghan’s baby bump seemed more pronounced than ever with her belt accentuating it

Prince Harry, dressed in a dapper navy suit in his regimental colours, hovered closed to Meghan throughout the night with the Duchesses’ baby bump looking more and more pronounced.

The couple’s outfits complimented one another and they seemed inseparable throughout the poignant service.

Prince William, dressed in an elegant purple suit complete with a subtle burgundy tie, didn’t match up as well with Kate stylistically, though he too hovered close to his wife throughout the night.

The Queen, on the other hand, looked regal in a violet Stewart Parvin coat, draped in aubergine wool with black velvet accents.

It is a combination that Her Majesty has worn several times before and it was completed with a Rachel Trevor Morgan designed hat – which has been altered over the years.

There was a potential fashion faux pas, however, as Camilla, in an elegant purple dress, seemed to clash with the Queen.

Partnered by a stylish Prince Charles, who dressed in a pinstripe navy suit, Camilla wore an outfit similar to the Queen, and even had her own purple hat to accentuate the look. 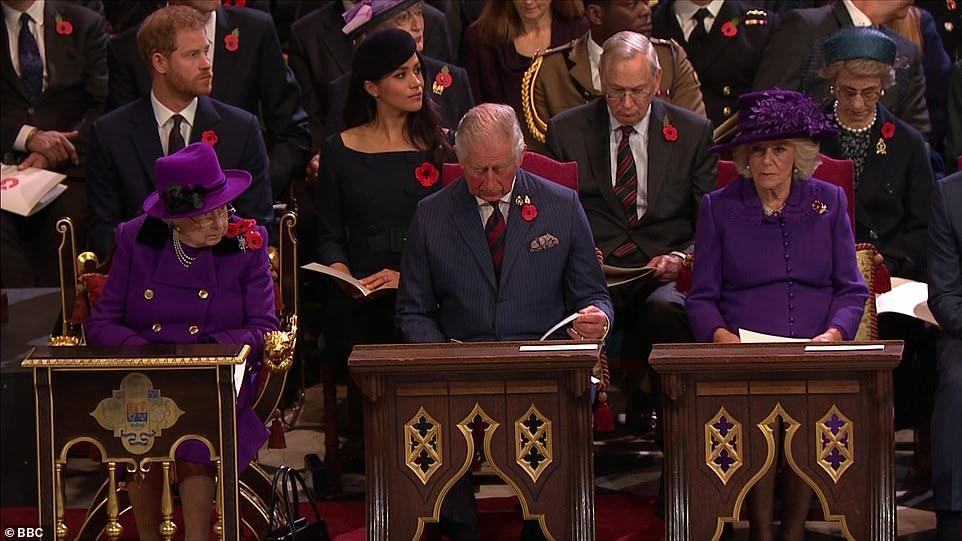 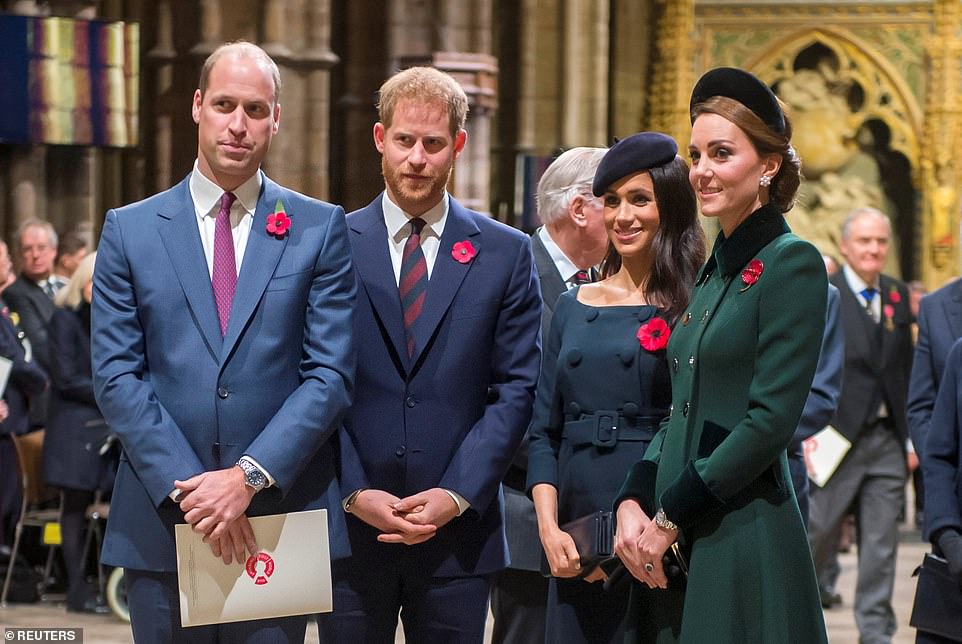 The Dukes opted for stylish suits with Harry dressed in his regimental colours. They joined their wives at the service to pay tribute to those that fought and died

Wear a favorite like Kate in a Catherine Walker custom coat From emerald to khaki, she's got a couple of green coats in her collection by the likes of Erdem, Hobbs and Sportmax, but this very smart double breasted style is a special addition to her outerwear wardrobe. It's a bespoke creation by Catherine Walker, and we love the contrast collar and cuffs. We've seen her wear it before like on St. Patrick's day in 2017, but love how she is so versatile.

Click (right) to find out more about the designer's made to measure service, or recreate Kate's look with the help of our round-up of alternatives. Since green is the color to be seen in this season, there are plenty of options out there. 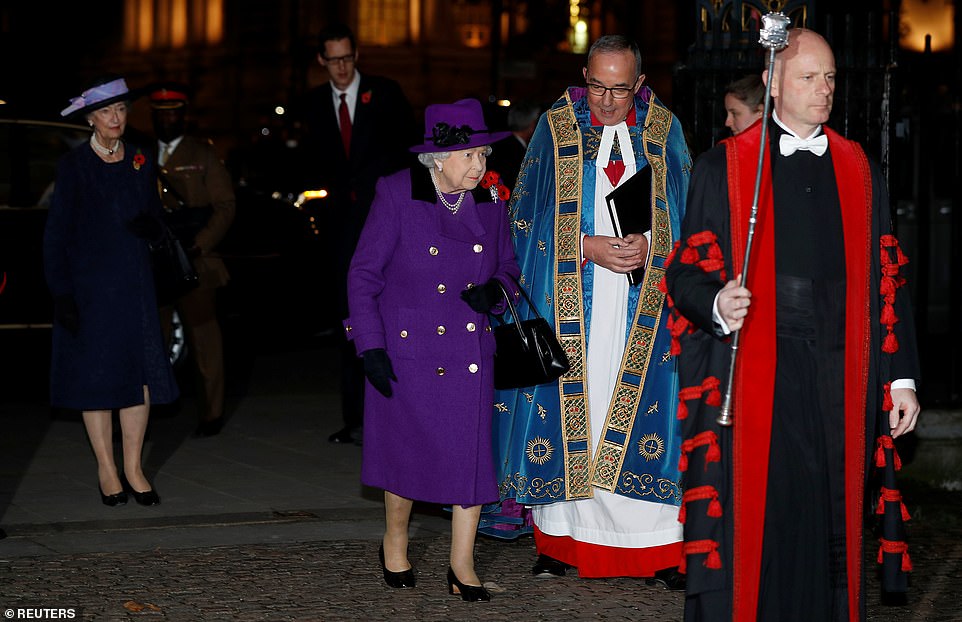 The Queen wore a tried and tested outfit and could be seen making her way into Westminster Abbey this evening just before 6pm. She was joined by Dean of Westminster John Hall

Theresa May was present at the service which honoured the countless soldiers who made the ultimate sacrifice for their country, while actor John Simm delivered a reading from John Jackson, Private 12768: Memoir Of A Tommy.

During the service, Prince Charles read an extract from St John while Mrs May also delivered a passage, followed by the Dean of Westminster John Hall. The service concluded with a rendition of God Save The Queen.

Away from the abbey, a wreathe laying service took place where dignitaries from across Europe laid down floral tributes across a carpet of poppies, poignantly blood red. 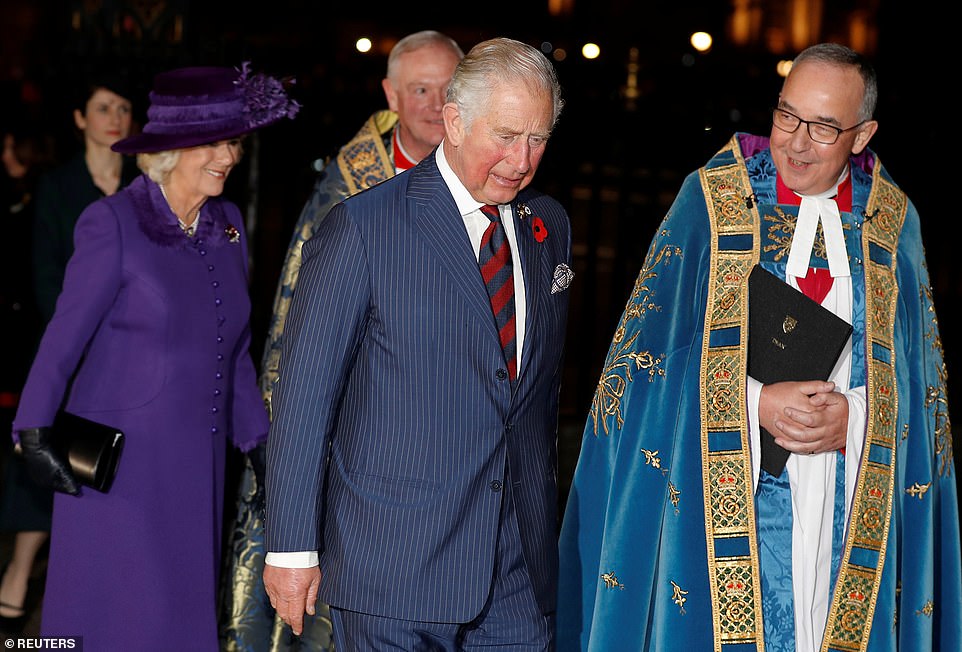 Earlier, the Prince of Wales laid a wreath at a memorial service for the Welsh Guards on the centenary of the Armistice 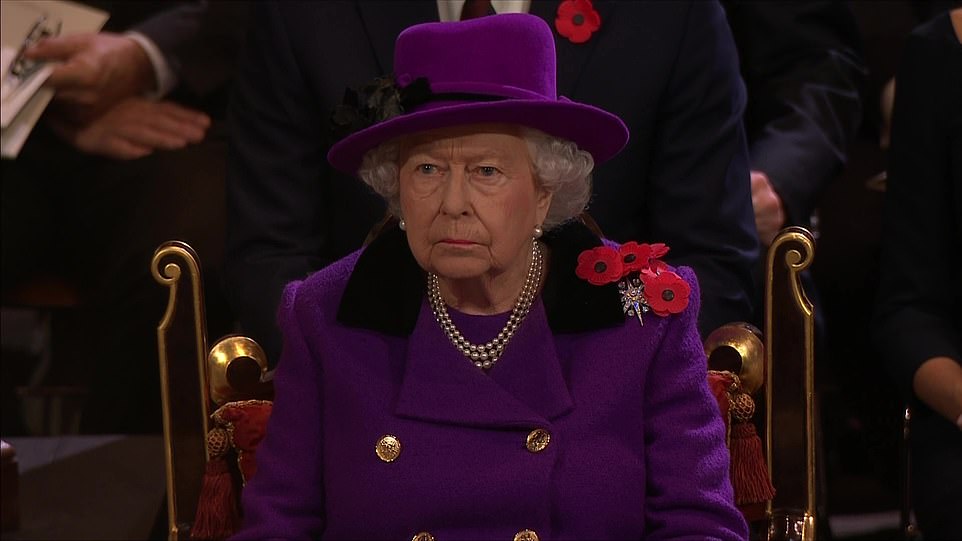 The Queen cut a solemn figure during the service which paid tribute to the thousands of soldiers who made the ultimate sacrifice, both British and German, during the First World War 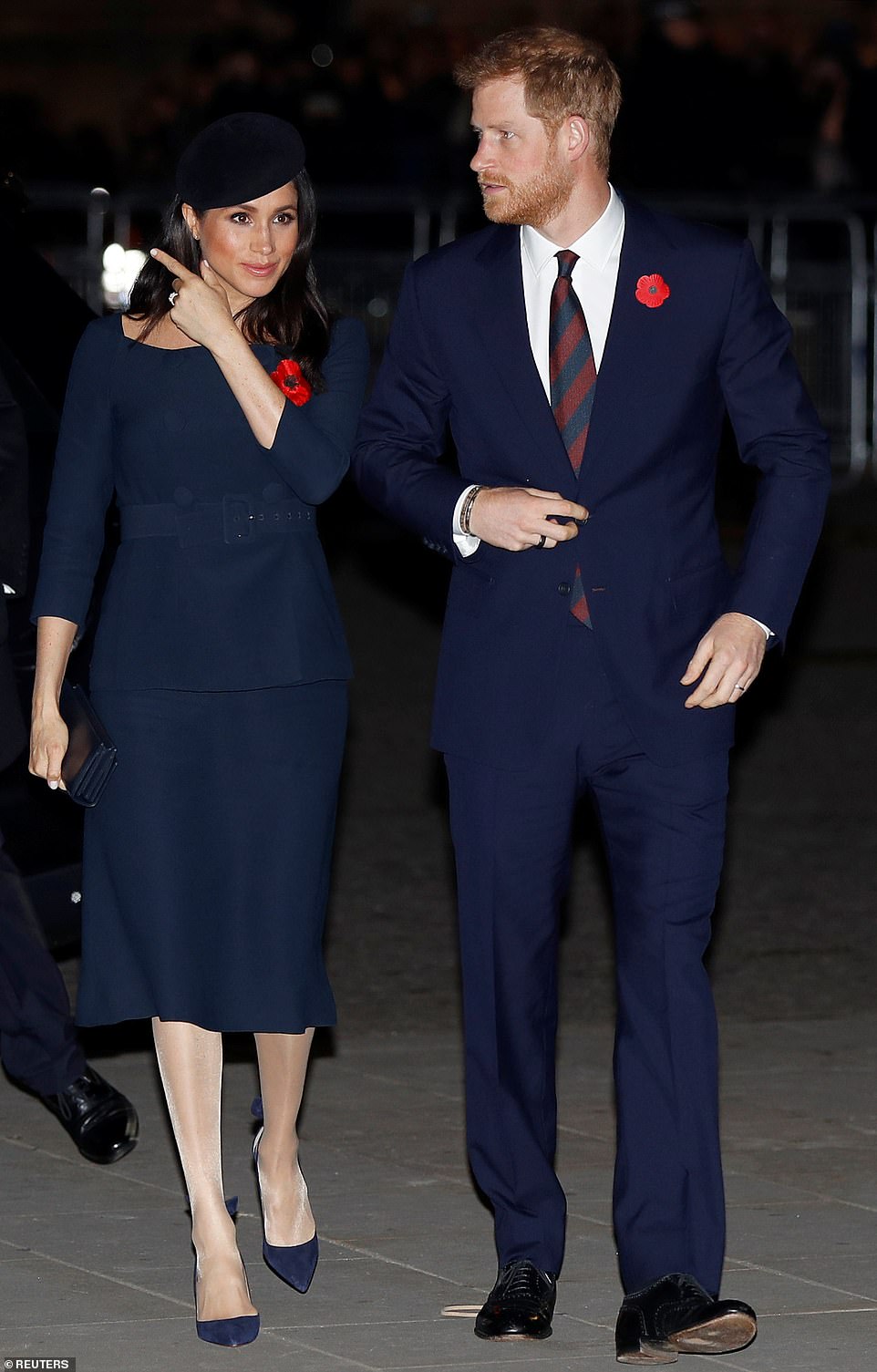 The Duke and Duchess of Sussex arrive at Westminster Abbey. Meghan Markle’s growing bump was on show through her smart navy outfit. Harry, like his brother, donned a tailored navy single breasted suit with a slim navy and burgundy tie

The Queen watched as flowers were laid at the grave of The Unknown Warrior.

In his bidding, the dean said: ‘As we mark today the centenary of the Armistice that brought to an end the First World War, we remember with sorrow the sacrifice of lives on all sides of the conflict and the suffering of the devastated and bereaved.

‘We reflect on how people were led into the war and how the war came to an end and on the uneasy peace that followed with its continuing suffering and the disruption of families and ways of life.

‘Above all, in our remembrance and reflection, we hope for a time when aggression between peoples and nations is transformed into friendship and collaboration, when all may live side by side in mutual encouragement and harmony and the weapons of war are transformed into the instruments of peace.’ 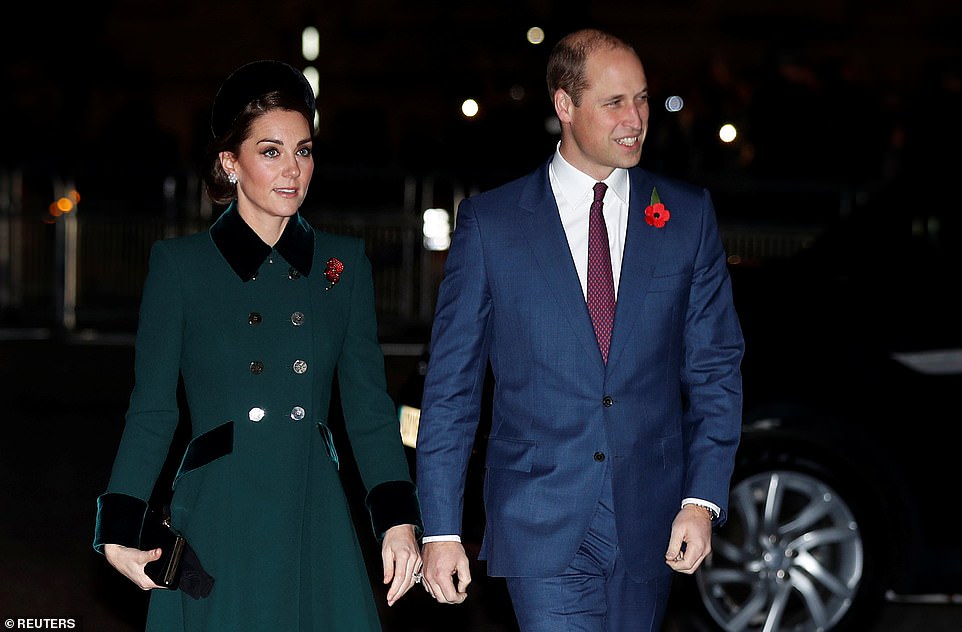 Prince William and Kate Middleton arrive at an Armistice Service at Westminster Abbey. The Duchess of Cambridge cut an elegant figure in a bespoke double breasted Catherine Walker jacket with contrast collar and cuffs, while William opted for a sharp navy suit with burgundy tie 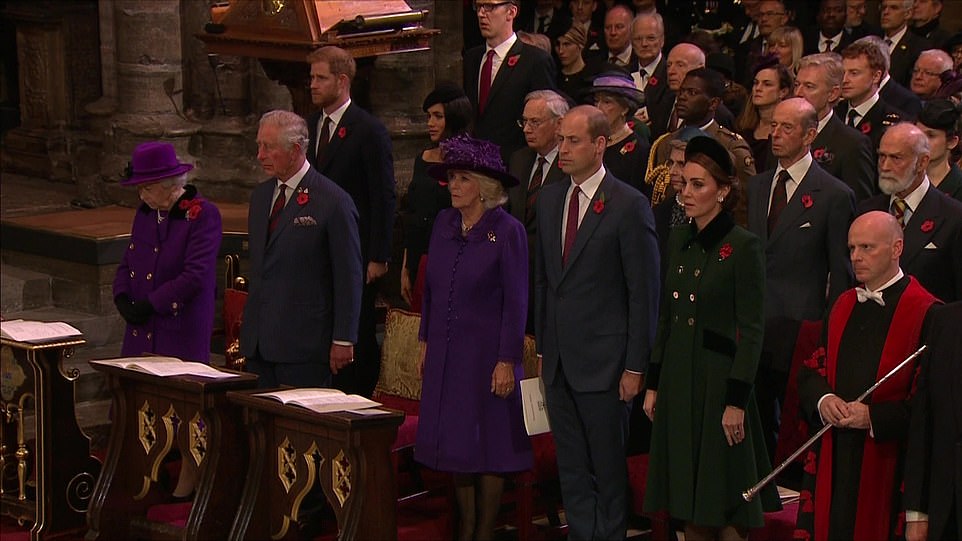