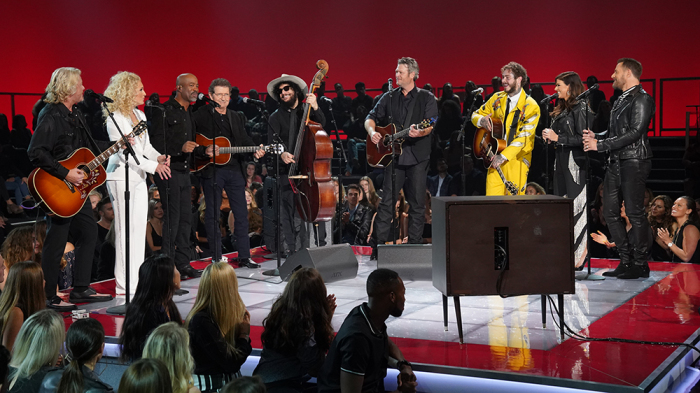 On the day Elvis Presley would have turned 84, NBC is marking the occasion by announcing performers for its “Elvis All-Star Tribute,” which will air on February 17 from 9-11 p.m. (ET/PT).

With Ehrlich on board as producer for his own AEG Ehrlich Ventures, the longtime Grammy guru leaned on his years of experience to match the right performer with the right song and come up with well-curated collaborations. Speaking to Variety, Ehrlich explains: “I was just listening to John Legend one day and thought, he’d be perfect for ‘A Little Less Conversation.’ … Keith Urban personally requested Post Malone for a duet on ‘Baby What You Want Me to Do,’ a section of the show which recalls the part when Elvis and his band were just casually playing together onstage. When I asked Post Malone about performing it, he said, ‘Oh, yeah, the Jimmy Reed song.’”

Other highlights from the two-night taping included Shawn Mendes’ take on “Hound Dog,” which prompted a laughing Mike Stoller — seated in the studio audience — to utter his famous refrain, “I always preferred Big Mama Thornton,” and Adam Lambert’s cover of “Blue Suede Shoes,” for which he paid homage to the Carl Perkins-penned original by sporting a pair. Says Lambert: “What was I supposed to wear? Red ones? Elvis defined pop culture in the ’50s with his voice, style and swagger. He was one of the first icons I ever listened to, so to take the stage during this anniversary tribute feels like a big honor.”

Aside from the in-the-round presentation, there are several other iconic set pieces, including Jennifer Lopez singing “Heartbreak Hotel” against the glimmering neon lights spelling out ELVIS, along with Yolanda Adams and Carrie Underwood’s gospel tribute and Josh Groban’s operatic “It’s Now or Never.”

The special will also feature interviews with Priscilla Presley and original ’68 special director Steve Binder, as well as an appearance from Lisa Marie Presley.

In addition, Sony Music Entertainment’s RCA/Legacy Recordings will release “The Best of the ’68 Comeback Special” on February 15, two days before the airing of “Elvis All-Star Tribute.” The new album is, in large part, a condensed version of a 7-disc boxed set released in November that included all of the recordings taped for the show. The February album will 15 Presley performances from the “stand-up” and “sit-down” shows filmed for the ’68 broadcast, plus three original studio recordings representing songs that appear in the new special. It also offers one intriguing bonus not included in the recent boxed set: a new version of the closing number, “If I Can Dream,” from the special, featuring Elvis’ original vocals alongside performances by Underwood, Mendes, Rucker, Shelton and Post Malone.

A complete listing of the scheduled performances: