Space-Time Distortions are events that occur randomly throughout Pokémon Legends: Arceus, likely in relation to the vortex that’s transported the main player back in time. The main story focuses on the relationship between Ancient Sinnoh and the Sinnoh that fans know from previous games. And these instances seem like a way of connecting the two, as well as explaining some of the time-travel elements of the Nintendo game.

As for what players experience when Space-Time Distortions open, they’ll usually be notified of the events while exploring one of Hisui’s five regions. These distortions only appear after a trainer has been granted three stars by the Galaxy Expedition Team. Once that requirement is met, they can crop up just about anywhere.

Once players are made aware of the distortion, they can head toward it using the map. Typically, it will appear as a colorful dome that players can pass through.

On the other side of the Space-Time Distortion, trainers will come across all sorts of surprises. They’re only present for a brief period of time, so acting quickly is key. But what do players stand to gain from these events in Pokémon Legends: Arceus? 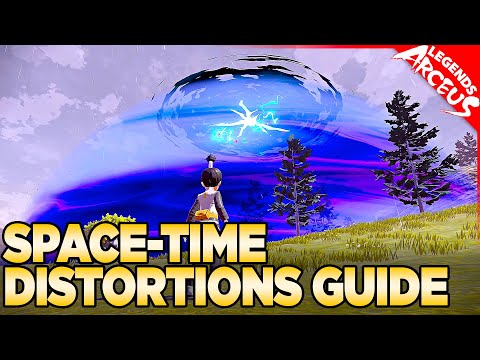 The Space-Time Distortions in Pokémon Legends: Arceus give players the opportunity to catch Pokémon they’re less likely to come across in the wild. The majority of the ones that spawn within the dome have a high level, and they tend to be aggressive. Trainers will want to bring strong opponents to engage with these wild encounters. However, the effort is worthwhile, especially for the catches that are exclusive to these events.

According to Serebii, the following Pokémon can only be found in Space-Time Distortions — and in specific regions, no less:

In addition to the above list, other rare Pokémon may appear during these distortions. They aren’t the only reason players need to keep their eyes peeled, either. It’s important to look out for items during these events as well.

‘Pokémon Legends: Arceus’ players can find items during these events

In addition to catching rare Pokémon during Space-Time Distortions, Pokémon Legends: Arceus players can also snag special items. Red, blue, and green shards tend to crop up within these fields, and players will eventually be able to create Star Pieces with the ones they’ve collected.

All of these finds are handy enough to warrant taking time away from the main story, and some of them sell for quite a bit of money. Needless to say, jumping into a Space-Time Distortion while playing the newest Pokémon game is almost always a solid idea. Players stand to walk away with some seriously great finds.