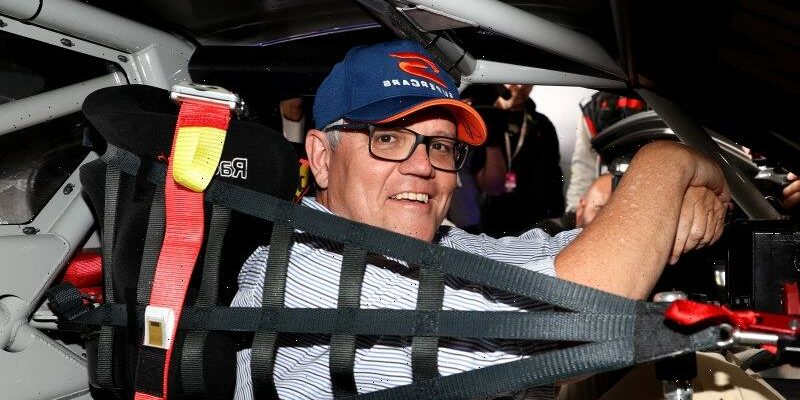 As Labor’s deputy leader Richard Marles was enthusing about Anthony Albanese not being a gimmick or a prop, Scott Morrison was driving around Bathurst’s Mt Panorama at 230 kilometres an hour.

The Prime Minister was at the spiritual home of Australian motor sport in central western NSW for an event, delayed by COVID-19, that happens to be in the safe Coalition-held electorate for Calare. 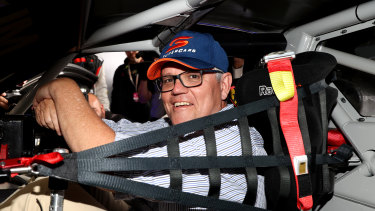 Scott Morrison was taking a trip around Mt Panorama as Labor accused him of being addicted to gimmicks.Credit:Brendon Thone

Albanese and Marles were at the West Ashfield Leagues Club, where the chicken schnitzel and chips can be upgraded to a parmigiana for an extra $4, a single train stop from the Coalition-held marginal seat of Reid.

There, Albanese spelled out Labor’s attack plans in the run-up to next year’s election. Morrison is a key part of that plan.

There was a policy agenda, with job security, cost of living and a “new” Australian economy powered by renewable energy, but the Labor leader made clear he wants a campaign about the PM’s character.

According to Albanese, the country is led by a man whose words have lost all meaning.

“Having already shown Australians and the premiers and the media and his colleagues and the Parliament and France and the United States that he can’t be trusted, Scott Morrison has now reached a point where he can’t even trust himself,” he said.

That was early in the speech. Albanese then used a large portion towards the end of this address to the assembled supporters to outline what sort of prime minister he would be if elected.

Again, the focus was on how he would be different to the Morrison voters have now watched as PM for the past three years.

“I’ve never felt the need to pretend to be anything other than who I am. With me what you see is what you get,” he noted. 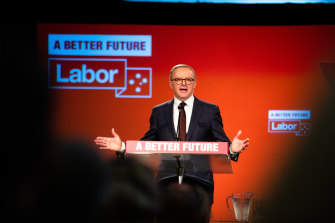 Anthony Albanese says the election campaign will be about his character, and the character of Scott Morrison.Credit:Edwina Pickles

After three consecutive losses, Marles asked party faithful if next year they wanted to again find themselves “standing in a half-empty hall on election night, staring into a flat beer, asking ourselves what if I had made just one more phone call? What if I had knocked on just one more door?”

It had a sense of desperation, and also an awareness that the next election could deliver a nail-biting result.

There were no such worries for the PM as he hooned around Mt Panorama.

On a track empty but for his vehicle, Morrison managed to talk about “Dick” (being Ford legend Dick Johnson who last won at Bathurst in 1994), floods and how the world could see Australia’s high double vaccination rate in the crowd around Mt Panorama.

He also segued from motor sport to his political driving force, saying Australians (and him) were “looking out the front windscreen, not in the rear vision mirror”.

But not looking in the rear vision mirror around Bathurst can quickly end in disaster.