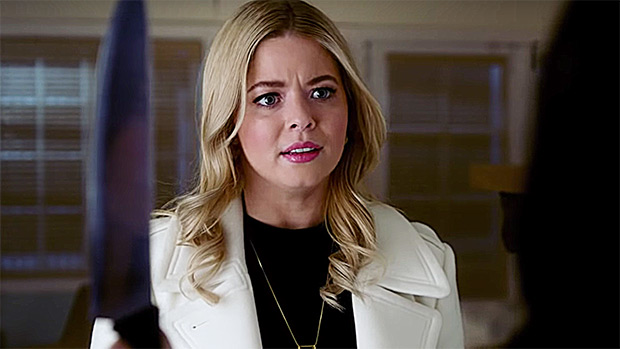 ‘Pretty Little Liars: The Perfectionists’ doesn’t premiere until 2019, but Freeform has released this brand-new sneak peek of Alison and Mona. This may be a new show, but Alison and Mona are still the same old Alison and Mona!

The Pretty Little Liars universe is expanding, with fan faves Alison (Sasha Pieterse) and Mona (Janel Parrish) at the forefront. The two characters will be heading to Beacon Heights for the highly-anticipated spinoff, The Perfectionists. In this sneak peek, Alison thinks she hears something in the basement. This is familiar territory for any PLL fan. When someone hears a strange noise, there’s likely danger in the midst. Fair warning, Alison!

When Alison closes the basement door, Mona’s there holding a butcher knife. This causes Alison to nearly scream! Thankfully, Mona’s not here to stir up trouble — for now. “I brought pie,” she says. You can at least put the knife down, Mona! The special sneak peek is party of Freeform and “ATTN:’s “March to the Polls” campaign regarding the midterm elections on Nov. 6.

Alison and Mona will be joined by exciting all-new characters, including Ava (Sofia Carson), Caitlin (Sydney Park), Dylan (Eli Brown), Claire Hotchkiss (Kelly Rutherford), and a mysterious character played by Hayley Erin. The upcoming series based on the popular book series The Perfectionists, written by PLL author Sara Shepard. The synopsis for the series reads: “Everything about the town of Beacon Heights seems perfect, from their top-tier college to their overachieving residents, but nothing in Beacon Heights is as it appears to be. The stress of needing to be perfect leads to the town’s first murder. Behind every Perfectionist is a secret, a lie and a needed alibi.” This show hasn’t even premiered yet, and we’re already obsessed. HollywoodLife will keep you posted on all the latest about the PLL spinoff!