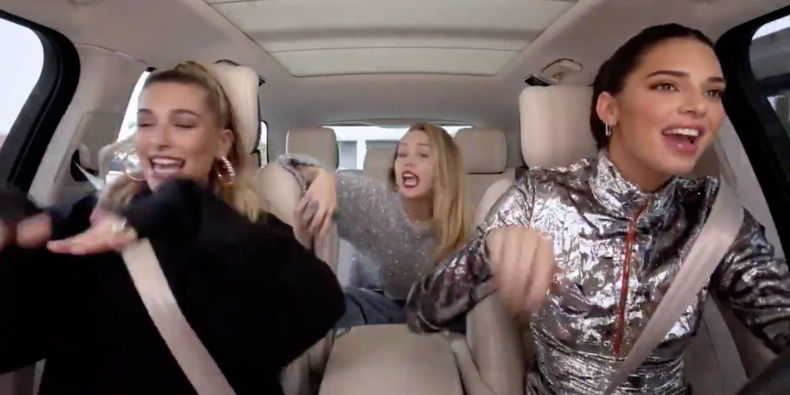 There is an entire television show on Apple TV based on a single recurring bit from James Corden’s The Late Late Show, and that television show is Carpool Karaoke. On Friday, the show premiered its latest episode, in which models Hailey Baldwin (who now goes by Hailey Bieber, despite how she's tagged on the Carpool Karaoke feed) and Kendall Jenner, 22 and 23, respectively, sing along to "a classic": Miley Cyrus's ubiquitous 2009 bop "Party in the U.S.A."

"I'm excited about this one," Jenner says. "OK, I’m ready," Baldwin barely intones. As the opening guitar riff emerges from the stereo, the two models begin to do a bit of a shoulder shimmy and a little hand-dancing, as one does when constrained by seat belts and the rules of safe driving. Then, just as the first verse begins, a familiar figure appears in the backseat: Cyrus herself, bobbing and swaying to the song. It's a little unnerving at first, like the walker in the background of every frame in It Follows.

Over the course of the minute-long teaser posted to the Carpool Karaoke Twitter feed, Cyrus proceeds to pop up outside Baldwin's window, and then Jenner's; when each model tries to get the other's attention, Cyrus vanishes again. Then, right when the chorus sets in, she appears in the backseat of the car in a red lip and a sparkly sweater, outdoing both Baldwin and Jenner's meager shoulder shimmies and hand-dancing, just three celebrity spawn hanging out on a casual drive around L.A. Cyrus knows it's a little silly, dancing to her own song in the background of a glorified late-night gag. She is the best part of this video, maybe even the only good thing. Miley Cyrus is pure joy.

To tide you over, here's a little sneak peek featuring a certain @MileyCyrus! pic.twitter.com/fGT6asbw6G

Nevertheless, neither Baldwin nor Jenner seems especially aware that a veritable country-pop crossover star is hanging out in the backseat of their car as they drive around, which is kind of rude. In between helping out with wildfire relief in Malibu with Liam Hemsworth and recording a song with Mark Ronson, she still made time to sing backup on their karaoke expedition. Look at Miley! She is doing the most. Please, everyone, pay more attention to Miley Cyrus.

Related: Miley Cyrus, Adriana Lima, and More Who Have Partied in the Pages of W Magazine